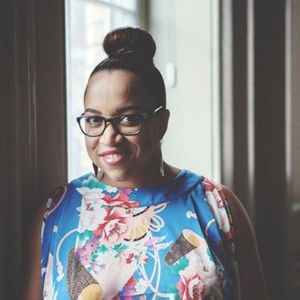 The Festival of Literary Diversity (better known as the FOLD) is one of the country's youngest literary festivals (now going into its third year), but it's rapidly becoming one of the most well-known and buzzed about. This year's festival runs from May 3 to May 6 in Brampton.

With a focus on diverse and underrepresented voices, including (but not limited to) Indigenous, Black, Disabled, LGBTQ writers, and writers of colour, the FOLD brings together some of Canada's most talented authors for panels, readings, workshops, children's programming, and more.

This year's stellar line up includes Kim Thúy, Catherine Hernandez, Tanya Talaga, and Jillian Tamaki, to name just a few, and more than two dozens events at several sites in the festival's home city of Brampton. For our Toronto-based readers hoping to check the festival out, we have good news: GO Transit options are available from Union and Yorkdale stations.

Jael Richardson is the founder and Artistic Director of the FOLD and has been the driving force behind the festival's rapid success. We're thrilled to welcome her to Open Book today to talk about the festival, programming, and what's next.

Jael tells us about the struggles of being a mighty but small and resource-strapped team and the importance of acknowledging underrepresented authors not only as experts in their experiences but also in their craft. She also teases a couple of big announcements coming up for the festival!

Don't miss your chance to attend the FOLD - tickets are for sale online now.

The FOLD has exploded in popularity and profile since its inception. Tell us about the experience of programming and planning the festival since 2016. How is the festival evolving?

I feel encouraged but also a little overwhelmed by the interest and enthusiasm over the festival. I think the Festival of Literary Diversity (FOLD) has shown a lot of us, myself in included, just how much interest there is in storytelling and storytellers that reflect a wider range of styles and experiences. I don’t think I understood how much of a gap there was in this capacity until we announced the FOLD – a gap in literary awareness, professional support, writer development, just to name a few. Since the festival emerged, writers, librarians and industry professionals come to us regularly asking for support or platforms or training. This is great. It’s helping us grow. But we’re having trouble growing fast enough, if I’m being honest. We’re having trouble doing it all.

This work is a full-time endeavour and has lots of prongs – supporting new writers, promoting established writers, and developing great programming that inspires readers of all ages and stages. It’s massive. But we have always struggled with money. Every year, as we meet with partners, we have to ask ourselves over and over, can we do this? Sure, there’s a need and it’s a great idea, but can we manage it? There are so many good ideas, but we are a tiny, largely volunteer team. So we’ve had to prioritize.

In terms of the future, the festival is important and will always be our signature event, but we’re looking at ways to build a strong literary presence year-round in Brampton, and we want to be helping diverse readers and writers across the country over the next few years, particularly in areas that are underserved. So our future goals are really focused on how we create the same experience in small doses year-round, and how to give folks who can’t be at the festival a taste of what we do.

What changes, if any, do you see in Canadian writing and publishing since the festival was founded?

I think there’s a stronger awareness of the shortfalls that have existed in the past in CanLit. I think people in the industry know that they have historically underrepresented Indigenous writers, writers of colour, LGBTQ writers, disabled writers, writers of faith, and writers who cross over multiple intersections, and I think the festival emerged at the right time to support writers in these communities who are finally getting the attention they deserve and industry folks who are making these changes. But I don’t think the industry knows the best ways to support all those communities, and I’m not sure everyone is ready to admit that part. Which is tricky.

So while I think the industry is headed in the right direction, I think you’re bound to see mistakes and missteps. You’re going to see some groups flourishing faster than others because there are real systemic barriers that don’t impact all marginalized communities in the same way, that people don’t like to talk about (i.e. Disabled writers and literary events held in inaccessible spaces).

The good thing about right now is that there is a base of folks who are able and willing to join together to challenge the system. Those groups that have been historically marginalized have a louder collective voice due, in large part, to social media, so I feel confident that while it may be messy sometimes, people will speak out and change will come not necessarily fast, but faster than it did in the past.

I hope the FOLD is being transparent about the difficulty of this work, that we’re paving a new way for approaching programming in a thoughtfully diverse way. I certainly see more festivals paying attention to some aspects of diversity in their lineups, but we know that getting this right is a constantly evolving journey, and I’m not sure everyone else understands just how difficult it is to be truly inclusive. I’m not sure people know that this is long-game work. That it will take time. I worry that when people aren’t honest about that, when they assume they know what is in fact impossible to know because of the limits of our individual experiences, they risk making decisions and doing things that are harmful to authors and the communities they serve.

We always start with the most underrepresented voices. Sometimes that’s a group that was underrepresented in the previous year and sometimes it’s a group that’s always underrepresented due to systemic barriers (i.e. black women and Disabled writers). So when we’re programming, we start there. We figure out what those authors need to get here, and our travel dollars go there first, and then we try to figure out who the best authors are to join them on stage. Most festivals typically start with big industry names, and can find themselves unable to slot in writers who need the added support.

It’s impossible to get “diversity” right in all aspects any year, let alone every year. There are so many layers, so many intersections. We regularly ask one question as we send out invitations and develop our lineup: Who’s missing? Sometimes we can fix that question and sometimes we have to wait until the following year.

In our first year, we wanted to have a panel on mental health, but we didn’t know who to ask or how to do that with a culturally diverse panel. We found writers of colour were talking about that more openly – and we thought this was an important part of the conversations. So the following year, we asked who might be comfortable talking about that in our author questionnaire. We left room for the panel but we had no idea who would be on it. In our second year, we had the panel On My Mind, and it was well worth the wait.

At the FOLD, we’re not just interested in how people identify though and that plays into our programming as well. We’re also interested in what they write – we want them to be seen not only as diverse voices, experts in their life experiences, but also as experts in craft. Because they are. This year, we really wanted to have different topics and ideas and styles of writing covered. We have a session on graphic novels, thrillers, and sessions by groups like Harlequin and Canada Reads, and workshops about some of those topics as well. I think it’s our most interesting program yet... but I say that every year.

Tell us about an event or two that you're particularly excited for this year.

This is like asking me what my favourite book was this past year. On what basis can I pick a favourite? I can say that while I am very excited about all of the panels, I am particularly interested in the discussion that opens up the festival: From Boys to Men. It’s a conversation about toxic masculinity, which interests me personally because I have a son and eleven nephews. I figure I need to get this raising boys thing right – there’s a lot riding on it.

I’m also really excited to have Tanya Talaga and Robyn Maynard sit down with Amanda Parris on Saturday night. I think there are some important stories in the news right now that these women are particularly well-equipped to unpack. Saturday night is always a really intimate evening, and I think they will give us all a lot to think about.

But Extraordinary Voices is also a panel that I think will be a learning opportunity for me as a writer. To hear some of Canada’s most experienced writers discuss how things are changing, or not changing, will be helpful for me as I continue to do this work.

How has Brampton and the surrounding community embraced the festival?

The City of Brampton has offered incredible support financially and personally. They really value the festival and each year, there are more and more opportunities coming our way. Next year, for example, a number of events will take place in the Rose Theatre, and I think it will be a big addition to the overall experience.

Holding the event in Brampton is one of our most important and complicated components. We’re a young city and an educated city, but each year we have to work hard to fill seats, to showcase what we offer and to get people to come out and enjoy it. It’s hard to get folks from Toronto to come to Brampton, but it’s also hard to get Brampton to come out to a big event in their city because it hasn’t been the common practice.

What's next for the FOLD?

We have a few big announcements coming soon which are going to be game changers. There’s nothing firm coming up, but for the first time since we established the FOLD, we are ready to build some solid additional plans that will accomplish some of the goals I talked about earlier – supporting year-round work and extending the reach of the festival for both readers and writers.

For more information about the FOLD and the full 2018 schedule, visit their website.