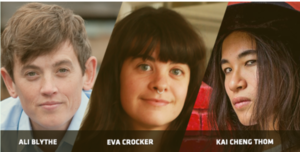 This morning, the Writers' Trust of Canada announced the shortlist for the 11th annual Dayne Ogilvie Prize. The award honours emerging writers whose body of work demonstrates great potential and who identify as lesbian, gay, bisexual, transgender, or queer. Past winners of the prize include writers who went on to become best-sellers and CanLit mainstays, including Amber Dawn, Farzana Doctor, Zoe Whittall, and Michael V. Smith.

The prize carries a $4,000 purse for the winner (as well as $250 for each remaining nominee), as well as promotional support for the winning author and his or her work from the Writers' Trust. This year's finalists were selected by a jury composed of author Jane Eaton Hamilton, journalist Elio Iannacci, and academic Trish Salah.

The finalists for the 2017 Dayne Ogilvie Prize for LGBTQ Emerging Writers:

Ali Blythe is the editor-in-chief of The Claremont Review. His poetry collection, Twoism, was nominated for the Dorothy Livesay Prize earlier this year. Blythe completed a residency at the Banff Centre and a writing degree at the University of Victoria, receiving the Candis Graham Writing Scholarship from the Lambda Foundation. He lives in Vancouver. Read an excerpt of Blythe's award-nominated work here.

Eva Crocker’s short story collection Barrelling Forward was shortlisted as a manuscript for the 2015 RBC Fresh Fish Award for Emerging Writers. Her stories have been published in Riddle Fence, The Overcast, and The Cuffer Anthology. Crocker recently completed an M.A. in English literature at Memorial University. She lives in St. John’s. Read an excerpt of Crocker's award-nominated work here.

Kai Cheng Thom is a writer, performance artist, and psychotherapist. She has been widely published as an essayist and poet, and is currently a feature writer at Everyday Feminism. Thom is the author of the poetry collection A Place Called No Homeland and the novel Fierce Femmes and Notorious Liars. She lives in Toronto. Read an excerpt of Thom's award-nominated work here.

The finalists will be celebrated and the winner announced at a ceremony in Vancouver hosted by 2016 prizewinner Leah Horlick. Free and open to the public, the event will take place during the Writers’ Union of Canada’s OnWords Conference on Saturday, June 3, 2017 at Simon Fraser University’s Harbour Centre. For more information about the prize ceremony event, visit the Writers' Trust website.

Robin Pacific established the Dayne Ogilvie Prize in 2007 to honour her late friend, who was a respected editor, writer, literary manager, and passionate lover of all the arts.