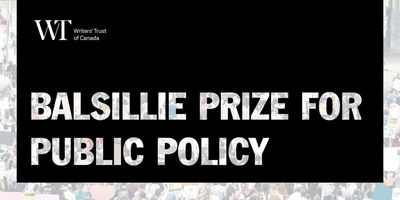 Today the Writers' Trust of Canada, the premiere organization for literary awards in the country, announced a major new award in the form of The Balsillie Prize for Public Policy.

The $60,000 award arrives as a heavy hitter in the landscape, adding to the Trust's existing nonfiction stable that includes prestigious awards like The Hilary Weston Prize for Nonfiction and the Shaughnessy Cohen Prize for Political Writing.

Sponsorship of the award comes from its namesake, philanthropist and businessman Jim Balsillie, who is best known for his role as the co-CEO of Research in Motion, the makers of the Blackberry. Balsillie headed the company through its heyday, when the Blackberry was famously a favourite of then-president Barack Obama. His sponsorship of the prize is part of a $3 million commitment to the Trust, which also includes the sponsorship of the recently re-named Atwood Gibson Writers’ Trust Fiction Prize, which honours authors and partners Margaret Atwood and the late Graeme Gibson.

The Balsillie Prize aims to encourage well-researched literary nonfiction that gets at the heart of issues facing Canadians. A wide range of social, political, economic, and cultural topics will be eligible for submission from publishers. Three finalists will be selected by a jury composed of writers and public policy experts. The three title shortlist will be announced October 13, 2021 and the winner revealed November 24.

The announcement included a quote from Balsillie, who said that the prize "will spotlight authors and ideas that aim to address the core concerns of our society and ideally lead to a more engaged, informed and enlightened Canada... My hope is that we can spur the commissioning of books that engage the general public and have potential to influence the work of the country’s top policymakers.”

Stay tuned to Open Book for more news on the Balsillie Prize and other literary awards.