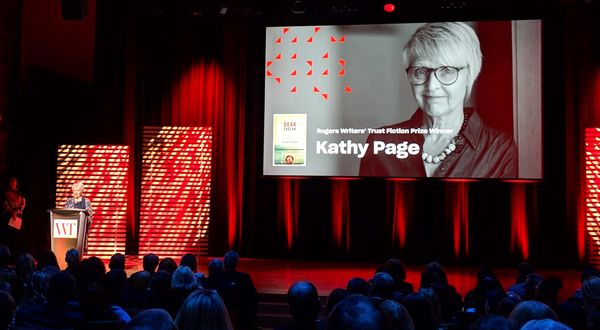 Last night in Toronto, the Glenn Gould Studio at CBC was packed full of writers, readers, and members of the Canadian literary community, all waiting on tenterhooks to hear the names of writers whose lives and careers would be changed by prizes from the Writers' Trust.

The multi-award event is the biggest of its kind, honouring fiction, poetry, short stories, and writing for young readers. There were points of interest throughout the evening, as an acclaimed novelist was awarded a nonfiction prize, and a small and might independent press scooped the big fiction award.

Elizabeth Hay was awarded the $60,000 Hilary Weston Writers’ Trust Prize for Nonfiction for All Things Consoled: A Daughter’s Memoir (McClelland & Stewart), a deeply relevant memoir that captures Hay's experience as a caregiver near the end of her parents' lives.

The $10,000 Writers’ Trust/McClelland & Stewart Journey Prize, a unique prize that honours a short story that has appeared in a Canadian publication in the previous year went to Shashi Bhat for “Mute,” a darkly funny story about academia and popular culture, with themes of fear, loneliness, and failed connections.

The evening also featured body of work awards, which reward not a particular book or story but a writers' whole output as well as their future promise: Jordan Scott of Royston, BC, won the $25,000 Latner Writers’ Trust Poetry Prize; past Giller Prize winner David Bergen won the $25,000 Matt Cohen Award, which recognizes a lifetime of distinguished work by a Canadian writer; Christopher Paul Curtis was the winner of the $25,000 Vicky Metcalf Award for Literature for Young People; and Alissa York, a previous winner of the Writers’ Trust/McClelland & Stewart Journey Prize, took home the $25,000 Writers’ Trust Engel/Findley Award, which honours a writer of fiction in mid-career.

The evening was emceed by acclaimed novelist, poet, and screenwriter Zoe Whittall and was broadcast as a livestream for viewers at home due to the popularity of the event.

Jury citation: “Elizabeth Hay’s loving, exacting memoir, All Things Consoled, details the decline of her elderly parents with unflinching tenderness. The path she and her family travel is crooked and long, filled with hospital beds and doctors’ visits, foggy minds, and shuffling confusion. But Hay’s prose elevates this ordinary rite of passage — the death of one’s parents — to something rare and poetic. All Things Consoled becomes, itself, a consolation for anyone despairing at the loose ends that parents leave behind. Page-after-page this is a masterclass in observation — a lesson in how meaning can emerge from grief.”

Awarded for the year’s best novel or short story collection.

Jury citation: “Kathy Page’s Dear Evelyn tells the tender and unsettling story of working-class Londoner Harry Miles and the ambitious Evelyn Hill who fall in love as the world around them goes to war. What initially begins as a familiar wartime love story morphs into a startling tale of time’s impact on love and family, as well as one’s complex search for personal meaning and truth. By integrating themes that are universally understood by readers and skillfully crafting endearing characters that surprise and delight, Page has created a poignant literary work of art. The result is a timeless page-turning masterpiece.”

Awarded for the best short fiction published by an emerging writer in a Canadian literary magazine.

Jury citation:“In Shashi Bhat’s ‘Mute,’ rooms open into other rooms, and each one is furnished with an inventory of meticulous detail, right down to the roaches scuttling across the floor and the narrator who puts on heels to rise above them. It is a story about fear and loneliness, failed connections and existential questions, as well as a darkly funny take on academia, literary snobbery, and popular culture. This is a story where sentences sparkle, each one laying down the path toward a perfect and most unsettling conclusion.”

Awarded to a mid-career poet in recognition of a remarkable body of work and in anticipation of future contributions to Canadian poetry.

Jury citation: “Jordan Scott savours and vies not solely with the materiality of language, but languages’ subjective materiality. For Scott, each context and uttering body manifests an original materiality: the precision of nature, anatomy, the names of friends, the contours of British Columbia or Poland, the daily ritualized cycles of parenthood and the cosmos.”

Awarded to a writer dedicated to writing as a primary pursuit in recognition of a lifetime of distinguished work.

Jury citation: “In novel after novel, David Bergen has explored some of the most important issues of his time, from such internal questions as what duties children owe their parents – to the eternal ones, such as what does a society owe its citizens.”

Awarded in recognition of a body of work to a writer of literature for young readers.

Jury citation: “Working against the sense of resolution that seems so obligatory in a lot of writing for children, his novels refuse easy redemptive arcs — bearing witness, instead, to the emotional and behavioural afterlife of love, tragedy, and violence.”

Awarded to a mid-career writer of fiction in recognition of a remarkable body of work, and in anticipation of future contributions to Canadian literature.

“From the bogs of Manitoba to the rivers of the Amazon rainforest, from the wilderness of Utah to the ravines of Toronto, York’s characters live lives entwined with natural wonders that are as complex, varied, dark, and beautiful as human experience itself.”