I had every intention of writing a post here yesterday, but the day slipped through my fingers like so many of them do these days. I imagine many other people are feeling what I am feeling now that it has been, my goodness, a month since I last held someone who isn’t my partner. All the tension and anxiety and loneliness is manifesting, this morning, as sadness. There, I said it. I’m sad today. The sunlight is pushing its way insistently through the window of my office, shining down on the aloe plant I keep forgetting to water when I make my rounds. It looks like spring and warmth outside, but I know that a tiny layer of snow has formed in the folds of the barbecue cover. I know that my plans of soon moving these herbs outside are more than a month away. But, I keep hoping for spring’s renewal and hope, wanting it to come before it’s ready. I’m ready, though. I need it. I’m sad today.

I’m not a person who let’s myself get picked up out of sadness easily. I long ago subscribed to a narrative about myself that I am a depressed person, and when I get depressed I call it a “him,” a masculine presence that visits and takes over and when he comes he looks different, more monstrous, each time. In the story I tell myself, I am helpless and once he begins his takeover, I am imprisoned in bed or on the couch for days and days, wiping chip seasoning onto the blankets and rewatching the season of The L Word when Dana dies. He visits more and more these days, while we sit and wait for this isolation to open, for the snow to melt; he looks different and bigger every time, but he’s the same man. My partner reminds me of this: he might feel different, but he’s just a man in silly fake glasses with a fake nose and moustache. I bested him a hundred times before and I’ll do it again. But it’s not even nine in the morning and I already feel defeated.

It feels strange to write about this sadness here when my poems are not—immediately, always—about those emotions. Something about their visual nature acts as a safeguard, another layer between my naked skin and the page, to ensure that the reader is free (a euphemism, maybe, for “kept at a safe distance”) to approach the work on their own. But, the more I think about OO as a larger project, the more I see that part of my work has been to let those big, dramatic, take-up-the-whole-room emotions I feel into the work of concrete poetics because historically, emotional engagement hasn’t always been a welcomed intruder into the world of visual poetry. No room for snack smears and trite television drama in the serious work of the visual avant-garde, I guess. Something about masculinity, something about formalism, something about the need to assert this work as poetry where other, more serious still, sense-making poets dismiss the visual avant-garde as not poetry, really. 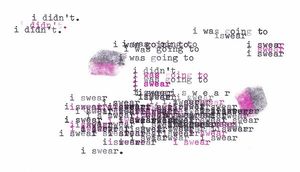 "I Swear" from OO, reminding me that this poetry is definitely emotional

I spent a long time grappling with what to do with big, silly emotions in a genre that didn’t feel it had room for those things. And then a delightful man named Eric Schmaltz entered my life. Eric’s views on visual poetics really changed how I approached the field: he was interested in beauty and aesthetics because they bring joy (and sadness, and all the other characters from Inside Out) and he was interested in the serious stuff and the silly stuff and the political stuff and the stuff that got hidden when these writers wrote their histories, and he didn’t feel the need to differentiate between those stuffs. He said brilliant little things that radically changed how I wrote. One time: this still looks like it was written on a page, and poof! my digital alterations of my typewriter poems expanded and roamed, finally free. Another time: I’m not interested in the “skill” it took to make this, and poof! my self-doubting voice in my head retreated to the graduate school past from whence it came. Eric does that, says these lovely little things that reverberate so you don’t realize he’s changed you, but he has.

Eric’s presence in my life has changed more than my poetry. He’s changed the way I relate my feelings to my work. Part of that is because Eric is also a bit of a big, dramatic, take-up-the-whole-room emotional kind of man. And, what’s most striking in that is that Eric’s heart-on-sleeve emotions is a part (an intrinsic, significant part) of his masculinity. Eric rewrites a masculinity that is insistently soft. He is almost always kind and generous and positive, and when moments of frustration or anger appear, he lets them out in these glorious little bursts. Thinking of Eric’s rewriting and reorganizing of the tropes of masculinity and the serious artist reminds me, always, of his work in The Assembly Line of Babel, where serious words and emotional words (FEELING, DESIRE) are enumerated and broken down into their constituent parts only to be reassembled as mess that is—has to be—okay with being mess. 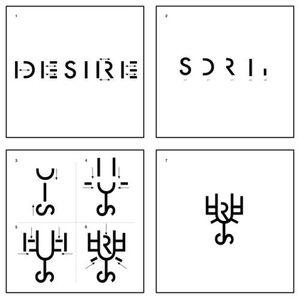 So, I’ve got to let myself feel sad today, I guess. There’s no way around it. But, I could really use some of Eric’s trademark positivity to get me through the day. I construct a version of him in my office now to say soft little things that make me feel better. “Forgive yourself the aloe drooping sadly to your right,” he says, and I make a mental note to water it this afternoon, not minding too much if I forget. He says that whatever I’m feeling today is okay, his past words of grief still echoing in my mind almost two years since I announced Priscila’s passing: “I’m really feeling this.” He was. I still am. I’m really feeling a lot of things.

I've got to stop writing now. My office Eric and I are going to take a trip outside where I’ll have a quick smoke and he’ll pretend not to mind. And he’ll give me this squeezing hug that feels immediate and pressing and reminds me that I really miss holding people. And we’ll both watch as that layer of snow on the barbecue yields to the April sun, knowing that in a month or so it will be warm enough for Eric to emerge as the soft, joyful Summer Boi™ we’ve come to expect. I need it today, but we’ll all have to wait a bit more in this mess, and be okay with it.