If you’re a writer and you’re not rich and famous—so what I mean is, if you’re a writer—you’ve heard this one, often enough from someone who doesn’t write fiction or maybe even read it.

Have you thought about mysteries? A lot of people read detective series, you know… Or, they say with a smirk, I’ve got it: you could write about child wizards away at a magical boarding school!

As a smaller-press writer, I think I understand the temptation to look down on bestsellers read by “the masses” and imagine people choosing the next book they’ll read based on ads in the subway. But with my day job being in the advertising industry, I’ve learned that it’s actually pretty hard to prove a given ad’s impact on sales. You can’t expect all your customers to be this guy. 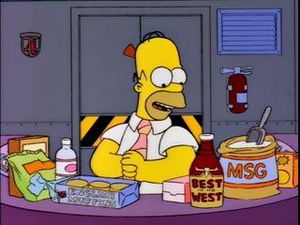 Well, I got everything I was supposed to get.

It’s a given that the books that get in front of more eyeballs have increased odds that Homer Simpson will remember their titles and buy the book next time he’s in a bookstore—okay, Homer in a bookstore is a stretch—and when the author’s name is already a brand, something like a subway poster makes even more sense, as its only real purpose is to remind you what you like and that you should probably buy it again soon: your Gillette razor needs blades, for example.

I've never had mass advertising to sell any of the few books I’ve sold so far, but I don’t think I mind. The ubiquitous claim that a book is a bestseller may imply a consensus in readers’ tastes or even a sense of social import, but it’s a claim that I don’t think does any of the work that the book itself does to sell books as books are actually sold: one at a time, to people who want to read them. My own reading choices come from friends’ recommendations, quality public readings or positive book reviews, which I think are all more effective than a poster saying a book is “riveting” like the book on last month’s poster was and the one on next month’s will also be.

See? It’s easy to trash bestsellers, especially if you’re a sour-grapes, smaller-press writer whose well-meaning friends tell them to just go crank out a vampire romance.

To this writer, it’s encouraging and dismissive at the same time to be told to write a bestseller. It’s encouraging, in the advice-giver’s mind, as they’re telling me to not fear writing a “low-brow” crowd-pleaser the masses will flock to or to maybe even lower my standards, and it’s usually said with the genuine hope that I’ll make more (any) money from my writing. It’s dismissive, though, of both the current work I’m proud of and the work of the bestseller writers, as though the adoration of the masses (or, if not adoration, at least a New York City agent and global publishing contract) are no trouble at all to get.

These contracts are hard to get. Easy reading is damn hard writing, and if the writer is actually a writer and not something more like a brand employing a team of writers—yes, such authors exist—then three hundred pages is still three hundred pages and all the usual rules still apply: characters still have to feel like real people, motivations have to be believable, settings have to come to life, language has to be precise. A writer who takes a break between “literary” projects to write, say, a thriller, expecting it to be easy, could well see it turn into a multi-year quagmire, as it should if they approach the work trivially, or lazily, or without respect for the readers of given genres, who know very well what they like in a book.

All this is on my mind because, since the summer of 2014, I’ve been working on a novel in which a man moves into a new apartment and starts being assaulted by a woman in his dreams. I don’t know much about the genres into which it might slot—horror or paranormal, I guess—but I’ve never taken it lightly. Among the ideas I had at the time I started, this was the one that interested me most, and when I work on it I just try to come to it honestly and follow it to where it goes. It’s been a long haul notably interrupted by an apartment purchase, an apartment sale, a house purchase, a wedding, persistent house repairs, the publication of two other books, the first two Blue Jays postseasons in a generation and imminently, a baby, but I’m nearly to the end of the third attempt at the first draft. If I eventually pull it together, who knows: the book might be published by a bigger publisher, it might be christened a bestseller, and I might regret some of what I’ve written here when I’m being told in the subway on the way home from work (I won’t make that much more money) to read my own book because it’s riveting or whatever.

I might also publish with a smaller press again, though, and just be grateful for the opportunity to have my book sell on its own merit, one copy at time, to people interested in reading it—grateful for that and the knowledge that no charity shop will ever have to cut off donations of unwanted copies because they already have enough to build a giant fort.

It’s easy to trash bestsellers, but every book deserves a fate better than that.

Daniel Perry’s first short fiction collection, Hamburger, was published in 2016. His stories have been short-listed for the Carter V. Cooper Prize and appeared in publications in Canada, the U.S., the U.K., and the Czech Republic. He has lived in Toronto since 2006. Nobody Looks That Young Here, a collection of linked stories, is his second book.

Nobody Looks That Young Here

This is Currie Township, Southwestern Ontario, where roads crumble, barns rot, jobs erode, marriages suffocate, and kids like Mike Carrion find themselves adrift in it all, scratching their way to adolescence before they either knuckle down or get out of here and never look back. Beginning with the Friday night car crash years before Mike was born, the 17 stories in Nobody Looks That Young Here follow the Carrion family and Currie Township in Mike's words and those of his parents, friends, and others who've already left for the city, well aware of what becomes of the people who don't.

Nobody Looks That Young Here is a book that counts Lives of Girls and Women, Sunshine Sketches of a Little Town, Winesburg, Ohio and the novels of S.E. Hinton as ancestors, and it includes stories published in Exile: The Literary Quarterly (2012 Carter V. Cooper Prize finalist, “Mercy”), The Dalhousie Review, The Prairie Journal of Canadian Literature, Great Lakes Review, echolocation, White Wall Review and elsewhere.