Readers of The Bone Mother will know that a significant part of the book’s effectiveness lies in the beautiful, unsettling archival photographs that illustrate the sections that are sent in and around the WWII era. I chose these photographs at the very start of the project, as prompts, and wrote the various pieces in direct reference to the images. Some writers and teachers have been curious about this process, and whether it could be applied to their own projects or to kickstart writing exercises—so here I am to tell you how I went about this. 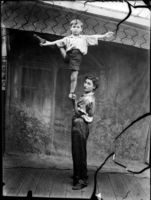 First came the general concept for the project. I knew that I wanted to write a series of first-person pieces, I knew more or less what time period and what region they would take place in, and I knew broadly speaking what the content would be like. I was not yet sure what medium I’d be working in—video, theatre, digital or print—and whether I would actually incorporate the photographs into the finished work. However, I wanted to ensure I had the greatest possible latitude in using them for whatever purpose. This necessarily meant that I would be looking at Creative Commons-licensed photographs and/or photographs in the public domain.

I knew from previous experience that flickr had a significant number of photographs in both categories, so I went looking there first. However, there are a number of sources online for photographs and other images that are worth checking out depending on the nature of your project. I navigated to flickr's Creative Commons section and began searching according to the characteristics that I had set out: People, portraits, blackandwhite, Romania, Ukraine, WWII, surreal, child, woman, and so on.

After trying various combinations of search terms, I came across a striking black and white photograph of two men seated together, holding a bouquet of flowers. It was clearly from a glass plate in some stage of decay or disintegration, speckled and scratched with cracks along one side. I saw that it was part of the “Costică Acsinte Archive” and that it was in two albums—one which was date-specific and had 40 items, and another titled “All” which had thousands of items. I clicked “All” and was immediately stunned by the variety of images by this one photographer, and the eerie power that some of them exuded. A number of them were taken against a painted landscape backdrop—these were the ones that caught my attention most. I set out to find 20 or 30 of them that I felt I could work with, and started scrolling and clicking and downloading.

I think I ended up with close to 50 photographs in my folder. I took a quick pass through and made choices among those that were very similar to each other. I was fascinated by the decay that some of the images had suffered, so chose in favour of that when I could. In some cases, the disintegration had all but obliterated the image. I was also intrigued by the unusual subjects in certain photographs: a young woman blind in one eye; an infant alone standing on a chair, an old woman with a babushka and an eerie smile; a young boy with a crown of flowers on his head; a young woman standing with her palm out and her brother standing on her hand in an acrobatic pose.

I then went back to the website and scanned through all of the photographs in the collection to make sure I had the best photos for my purpose, and then went through my folder once more—narrowing the selection down to 25 images. I then printed them out, just on ordinary printer paper, cut them out and arranged them on my living room rug in a 5 x 5 grid. I then picked them up, alternating between men and women, singles and couples, adults and children, so that I would have no choice but to take on a variety of voices in quick succession. I did some research on the photographer and the region where the photographs were taken, as well as some preliminary research on the legends, folktales and creatures I wanted to explore. Then, when I was ready to write, I took the first photograph—the one of the men with the bouquet—held it up and looked at it intently, imagining their relationship, their occupations, their home lives, their status among their friends and relatives and neighbours. Much sooner than I expected, I had a name for my first character, Borys, and then his first sentence: “My brother Sergyi and I were married in a small ceremony in our village church.”

Over the next several days I wrote that first piece, surprising myself with the oddness of the events unfolding within it, and with the confidence of the voice relating them. When I reached the end, I immediately thought, “Well, that worked!” And so I moved on to the next, and the next. I did have a few false starts, and I did at one point return to the archive to find a few more photos as I made some additional discoveries in the text. But overall, the photographs were hugely useful and unlocked a remarkable range of voices and stories from within me. I ended up using the photos both as projections in the performance version staged in 2015, and in the book that ChiZine published in 2017.

Prompts can be photographs, drawings, sketches, paintings, maps, objects—or poems, quotations, passages from literary and religious works, obituaries, news stories, fortune cookie messages, crossword puzzle clues (with all applicable copyrights respected, of course). You could incorporate them into the work as I did, or you can keep them aside as your secret inspiration. You could use a different one for each chapter, or for each character, or you could use one especially resonant prompt as the touchstone for an entire book. You could also have a few on hand if you ever encounter writer’s block and you need to write your way out.

If you’ve never used prompts before now and you’ve been curious to try them, I highly recommend it. And if you find the notion of inspiration through rules and constraint to be an intriguing one, you may want to read up on the French movement known as Oulipo, notably employed by Andre Alexis in his novel Fifteen Dogs.

– I wonder, said Hermes, what it would be like if animals had human intelligence.

– I'll wagera year's servitude, answered Apollo, that animals – any animal you like – would be even more unhappy than humans are, if they were given human intelligence.

And so it begins: a bet between the gods Hermes and Apollo leads them to grant human consciousness and language to a group of dogs overnighting at a Toronto veterinary clinic. Suddenly capable of more complex thought, the pack is torn between those who resist the new ways of thinking, preferring the old 'dog' ways, and those who embrace the change. The gods watch from above as the dogs venture into their newly unfamiliar world, as they become divided among themselves, as each struggles with new thoughts and feelings. Wily Benjy moves from home to home, Prince becomes a poet, and Majnoun forges a relationship with a kind couple that stops even the Fates in their tracks.

André Alexis's contemporary take on the apologue offers an utterly compelling and affecting look at the beauty and perils of human consciousness. By turns meditative and devastating, charming and strange, Fifteen Dogs shows you can teach an old genre new tricks.