I haven’t spoken about it a whole lot, but just a few months before the The Bone Mother’s release, my mother died. While not unexpected, it was unpleasant, and of course brought a lot of memories and emotions to the surface, where they thickened into a murky mossy swamp. (She was, shall we say, not a fan.) My immediate impulse was to turn inward and pull the covers over my head and let the world wash over me. At about the same time, the first reviews for the book were starting to come out, and they were startlingly positive. I realized in short order that I should take the opportunity to both promote the book and escape from my personal turmoil, so I made plans for my local book launch--which is another story--and then asked ChiZine publisher Sandra if it would be worthwhile for me to go to the two American conferences that she and co-publisher Brett were planning on attending: Readercon near Boston, and Necon near Providence. She encouraged me to do so, and I’m glad she did—despite where I was at emotionally, they were both exceptional experiences. 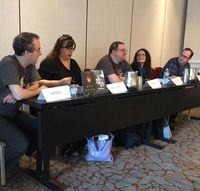 Readercon, “a conference on imaginative literature,” is held over three days in July in a suburban Marriott hotel. As you can tell from the name, the emphasis is firmly on readers. From their website: “Although Readercon is modeled on 'science fiction conventions,' there is no art show, no costumes, no gaming, and almost no media. Instead, Readercon features a near-total focus on the written word...The program consists of two tracks each of panel discussions, author readings, and solo talks or discussion groups, plus kaffeeklatsches (intimate gatherings with an author) and autograph signings. The program also currently features the presentation of two major genre awards: The Cordwainer Smith Rediscovery Award for a neglected author and the Shirley Jackson Awards for dark fantasy and psychological suspense.”

The event has close to 150 participants, including many of the genres' superstars, who love the conference and come back time and again. They take part in a wide array of readings and panels for an audience of hundreds. It also has an extensive dealers’ room which is very much a focus for attendees. To be clear: they arrive with empty suitcases that they are eager to fill; they come with set spending budgets, in cash, that they then exceed and have to top-up from the lobby ATM; they want to meet you, they want to buy your book, and they want you to sell it to them.

I had daydreamed that my participation would consist of wandering among the various sessions in my own personal haze, with maybe a few stops at the bar in between--but it was not to be. Especially since I was a first-time author, and especially since I was a first-time attendee, it was important that I spend as much time as I could in the dealers' room, behind the ChiZine table, meeting readers and signing and selling books. I was highly ambivalent about this, as I'm an introvert at the best of times, and neither a great salesperson nor the best self-promoter. But it's amazing what you can learn when someone is standing in front of you with their wallet open.

As it turned out, Sandra and Brett and I were a great team. One of them would say things like "And this is one of our authors, David Demchuk. This is his book, and he will sign it for you." And I would say things like "If you're looking for a recommendation, I suggest this one because I wrote it." Some of the people who came by wanted a brief description of the book, and would ask "Is it like [INSERT TITLE HERE]? Does it have [INSERT GENRE TROPE]?" And sometimes, inevitably, they would ask if we could recommend something else--so I made sure I was familiar with a lot of the stock we had on display, and could steer people one way or another according to their needs and tastes (Something by a woman? Something funny? Do you have any YA? Any vampires? Zombies? Graphic novels?) I'd say seven or eight times out of ten, the person would buy something that I had recommended *plus* my book and I would be over the moon.

We also had browsers who would come back two or three times, poring over the titles, jotting things down and wandering away, and our little black hearts sank each time--and then they came back on Sunday (when many of the dealers had marked down their stock to avoid having to drag it away) and they hoovered up everything they'd had their eye on since Friday. Very canny shoppers, the Readercon folks!

Necon, the Northeastern Writers' Conference--also known as Camp Necon, is much smaller and very different. It is held over three days later in July, in a small university inn/conference centre about 30 minutes outside of Providence, Rhode Island. While there are a few fans who come to Necon, the vast majority of the attendees are other writers, publishers, editors, illustrators, agents and people in 'the trade'. It is definitely a 'by us, for us' kind of event. There is only one stream of programming, the dealers' room is somewhat smaller, the rooms and facilities are modest, and the overall vibe is closer, warmer, more casual and more familial. It's not called 'camp' for nothing--that really is what it feels like. Readercon was the place where I listened to and shook hands with the writers I most admired; Necon is where I stood outside talking with them smacking mosquitoes and drinking beers.

My Readercon experience was one of relative anonymity, which had its benefits considering how I was feeling. I found Necon to be intense in comparison just because it was so intimate. You can't really disappear into the crowd--there is no crowd.

"But what's it like?" I hear you asking. Well, there is a saugy roast. There are parties in the quad. There are hangovers in the panel sessions. Most of the meals are communal, in the centre's rather large cafeteria. (The food is very good, by the way--with all the dietary options you would hope for.) There's a Hawaiian shirt contest, mini-golf, high-low jack, darts, foosball and ping-pong. Newbies wear little buttons marked 'Fresh Meat' which is vaguely menacing but actually hugely helpful for newcomers who have trouble breaking the ice. It's a rough and ready event with a decidedly salty streak that (respectfully) upends a lot of what you'd normally expect from a con and its attendees. It is not for everyone, and it is not trying to be, which greatly adds to its charm. Also, many of the people who go to Necon have been going for decades (the conference is nearly 40 years old), and yet they're all very open and welcoming. They are quick to embrace newcomers--even/especially weirdos like me--and the organizers, the legendary Booth family, go wildly out of their way to personally assist and accommodate attendees with whatever they need.

Once again I was behind the ChiZine table for a large part of the weekend (though I did take part in a panel--alongside master of horror Laird Barron, among others--at the unholy hour of 9:30 a.m. on the Saturday morning, which was a test in every sense) but this time I was selling my book to my peers which was an altogether different challenge. Whatever I said must have worked: we sold out of my book once, so I went to get my personal copies out of my room, and we sold out of those too.

Last year's event was also notable for the fire alarm (caused by kitchen smoke) that drove us out of the building--and turned into a giant group photo. You can see my little bald head in there somewhere. 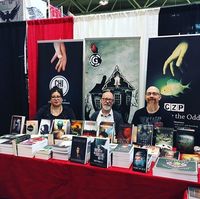 My third and final meet-the-masses experience of the year was in September at Toronto's FanExpo convention--which is a humongous full-on fan-centred mega-event held at the Metro Convention Centre. Wristbands? Check. Costumes? Check. Art show? Check. Gaming? Check. Film and TV activations? Check. Celebrity signings? Check. Instagram model photo-ops? Check. Media? Check. Thousands upon thousands of attendees? Check check check. ChiZine's table was located on the corner of an aisle in the horror section, which was the best possible location. I stopped in twice to visit and sign, and both times it was a treat to meet fans, compliment their often-ambitious cosplay, sign and sell and recommend books of all kinds to readers who came specifically to shop and support publishers and creators directly. This was a few weeks before the Giller nomination, so I was still the writer of a normal/abnormal horror novel. While my agoraphobia did kick in a few times, it was a massive amount of fun, and I would go back anytime albeit with meds firmly in hand.

Despite the emotional effort (and maybe in a way because of it), there was no better way to bring my book into the world than to take part in these events. I know not everyone can--US travel is a challenge and Readercon in particular is a not-cheap event--but it was a great way to meet some wonderful people, including writers I'd been looking up to since I first started out, and it was also a terrific way to bond with my publishers and learn more about their side of the business. I encourage everyone to take the opportunity if they can. I'll be back at Necon for sure this year, and possibly Readercon as well, so keep an eye out for me.

Cocktails at Seven, Apocalypse at Eight

I'm Derby Cavendish-that's pronounced Derby with an “ar' sound, not an “er': remember it for later. Ever since I was a boy, the forces of the otherworldly have been drawn to me like divas to a spotlight. But I'm ready for them. Bring it on, bitches. He's the reason there are no zombies at Christmas, no fairy magic (the bad kind) at Gay Pride, and no werewolves (except one and he's a dear friend) at Hannukah. He's Derby Cavendish and for several years, Don Bassingthwaite has been bringing him to life at much anticipated annual readings. Now for the first time, these flamboyantly funny, supernaturally saucy stories are brought together in one fabulous collection. If you like your chills with giggles and glitter, Cocktails at Seven, Apocalypse at Eight is for you!