There comes a time in a writer’s life when, if you are very lucky, you will be published (frequently but not always a book) and you may feel the need to draw attention to it with some kind of hoohah. You might opt for something quite intimate—just friends and family—or something quite large, say for 50 or 100 people or more. You'll know when you get there.

More and more often, publishers are holding group launches for a selection of titles, or press events and signings in lieu of launches, or vaguely launch-ish things at already established events like festivals or reading series or conferences. And these are all great...but you may want to do something other than just buy your pals a round at a nearby pub after the poo has hit the fan elsewhere. You have a little money—you’ll need a little money—so you’d like to hold a launch. (Note: You do not need to hold a launch. You can do just fine without one. You could choose to be an adult, unlike me, and save your money for the retirement you'll never have.)

But if you do choose to do it...how do you do it? Well, I organized a launch last summer when The Bone Mother was first published, so I have a few insights to share: 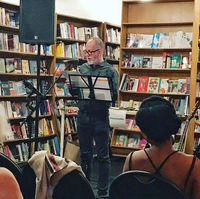 Pick a date and time. From what I can tell, the current thinking is: Don’t pick a Monday, a Friday, a Thursday, or a Saturday night. Sunday night is fine if you start early and end early. Tuesday evenings and Wednesday evenings are generally okay. Your mileage may vary where you are—check your local listings and see when other authors and publishers hold their events. If this is a book launch, make absolutely certain you will have your books in hand. Be mindful of holidays, conflicting social or cultural events, competing interests—it helps to ask a few friends informally before you commit in case there’s something you’ve forgotten or that is just outside your line of sight. Overall, try not to start before 7 unless you plan on serving dinner, and try to end by 9 (though it’s nice if people have the option to stay longer). Have two or three other dates in mind as backup just in case.

Compile your invitation list. How many people do you think you can stand? Everything else flows from the magic number you determine here. Focus on the people you’d really like to see, and those who would really like to see you. Inviting your entire facebook friends list is not especially strategic, nor does it tend to be effective. This event will likely cost some money, so think carefully about who you want to spend it on: Your friends and loved ones? Your family? Your peers? An agent or two? Local media? The people you hated in school? Try to include a few supporters who are well connected in social media—we’ll talk about this in a moment.

Cut that total in half, and book a venue. Yes, half. Many people will not be able to attend, no matter what day or time you choose. (If you are super-confident about your list, you could reduce the number by a third instead of by half. But that’s it.) You don’t want your venue to look deserted. Now, with this figure, and with your date and time in mind, determine a suitable venue—be it a bookstore, a bar or cafe, a party rental space, or somewhere unusual connected to your book by theme or subject. Always try to find a place that’s accessible to those with varying abilities, and reachable by multiple forms of travel. I held my launch at the local LGBTQ bookshop Glad Day, which has a restaurant and bar on site, as well as a sound system with a mic and speakers. I was able to get the space itself for free with the understanding that their money was coming from book and drink sales. I also asked them to cater the event, which was an incentive. I invited about 150 people; the space had seating for 60; the room was pleasantly full.

Plan your evening. The simplest launch, generally speaking, is one where you sit behind a table with a pile of books, and have someone beside you to sell them while you smile and sign them as appropriate. The next level up includes a short reading, where you welcome everyone, talk for a bit, introduce the book, thank a few people, then read for 15 or 20 minutes tops. (Then table, selling, signing, and so on.) If you’re going all out, you can include some other readers, some music  and more. I am old, and life is short, so I went all out.

If you actually want to spend less on your launch than you’ll make on your book, you’ll consider the next few items to be optional—but they do make for a lively evening.

Arrange for food and beverages. It will come as no surprise to anyone who's seen me, I find it’s good to have snacks. You never know where people are coming from or going to, and snacks make people feel obligated to stay a little longer than usual. If it’s a small get-together, cheese and crackers and crudités are fine. If you’re being more ambitious, you could order up some savoury tarts or dumplings or toasts or stuffed mushroom caps. Yes, look at me, I'm fancy. Make sure you have some things appropriate set aside for people with dietary issues. When arranging for beverages, always make sure you have something for people who don’t drink alcohol, and for those who are avoiding sugar.

Hire a musician. Yes, I found a musician. True story, I pretty much hated readings and book launches (sorry) until I went to one that had a musician who opened each portion of the evening with a song. (Shoutout to Kari Maaren, herself an author of note.) This blew my mind. It changed everything for me and I can’t recommend it enough. For my launch I hired a co-worker, but you could go with a talented friend or family member, or someone who played at a cousin’s wedding or a busker you happen to like. Don’t spend a fortune, don’t upstage yourself, but give this one some thought.

Find a guest reader. I had decided early on that, if I was going to have a launch, I wanted to create an opportunity to highlight a younger writer from a background other than my own (in my case, writer/performer Dainty Smith) who was approaching similar material to mine from another perspective, and pay them to read a short selection of their work. This turned out amazingly well. If you have the means to do this, I recommend it highly.

Bravely submit to an on-stage interview. This too was a surprise hit of the night. I asked a mutual on twitter whose online interactions I greatly admired—the remarkable Anthony Oliveira—if he would interview me as part of my launch. (Yes, he agreed and, yes, I paid him.) This was a great way for the people attending to get to know more about me, about the book, what inspired and influenced it and how I wrote it. Also 10/10, would do it again.

Hold a contest. I had a leftover Glad Day gift card and I used it to buy some thematically related books for a giveaway, and included my own book as part of the package. This provided me with an Oprah moment where I got to tell people to “look under your chairs!” This was a great way to support the bookstore, and other authors as well.

Cover the event for social media. This, I think, was critical to the success of the evening and the success of the book overall. I invited several friends who have sizeable followings on Twitter, Facebook and Instagram to come and take photos through the evening and post them to their feeds, tagging me as well as the other writers and performers in attendance. The venue reposted and retweeted these images, as did some of our other friends and followers. In the end, thousands of people online were aware of the launch, the book, the attendees, the store (and the food), which had a huge impact on the book’s profile.

Get a DJ. Ours was not a dancing crowd, sadly, but we had great music for hanging around and mingling and (of course) snacking. If you prefer, and your venue can accommodate it, you could bring along a one-hour playlist on the device of your choice.

Weave a Circle Round

Freddy doesn’t want people to think she’s weird. Her family makes that difficult, though: her deaf stepbrother Roland’s a major geek, and her genius little sister Mel’s training to be the next Sherlock Holmes. All Freddy wants is to survive high school.

Then two extremely odd neighbors move in next door.

Cuerva Lachance and Josiah definitely aren't normal. Neither is their house, which defies the laws of physics. Neither is Freddy’s situation, when she suddenly finds herself stuck thousands of years in the past with her very, very weird neighbors. And that’s only the beginning.