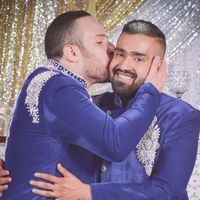 The older I got, especially when I started going to Simon Fraser University, the less I was interested in writing horror stories. As I was contemplating my own sexuality and identity, my stories shifted in tone. I wasn’t afraid to write about the topics I feared about the most when I was in high school. Things were different in university. People were adults, more mature, and I knew I could write about my real-life experiences.

I started to write poems that illustrate how I felt inside, and I started working on my novel God in Pink. Originally, the novel was a love story between an American soldier and an Iraqi in war-torn Iraq. Over time, that plot, too, shifted.

While I was working on my novel God in Pink, my life was going through a love story of its own.

On April 09, 2011, I was invited to attend my friend’s birthday, which he shared mutually with Tarn, whom I haven’t met before. Well.... I did look him on Facebook and I even added him. Seeing a Facebook photo is one thing but meeting the person is something else. I was so sure that I met my soulmate.

Before meeting Tarn, my mind was set on marrying a woman. I wanted to make my parents happy and start a family with a woman…. Eventually having children. This has always been our mutual dream.

When I met Tarn, I saw all the possibilities of having a family with him. I didn’t focus so much on how it was going to be done. I just knew I could trust my heart.

Tarn didn't want a relationship because he just broke up with his ex-boyfriend of 5 years and he wasn’t ready for another one. He definitely wasn’t ready to start one with me, the clingy, emotional Hasan. But did I give up on him? Absolutely not. I’m not someone who gives up on anything in life.

I knew that I had to be patient and it wasn’t easy for me because patience isn’t one of my virtues. I was praying inside that he would reciprocate the same love that I had for him.

For the first six months after we met, we were friends, with the odd hook up here and there. We didn’t tell anyone about us. I would spend every day with him and whenever it was time for me to go back to my family house, I’d get super depressed.

One day, when I was about to leave for my Toronto trip in August of 2011, he dropped me off at the family house and gave me a kiss on the lips. I had shivers all over my body.

It was so hard to hide my sexuality at this point. I couldn’t do it anymore, so I came out officially to my mom and once again to my dad, whom he suspected that I was gay throughout the past years. I kept going in and out of closet out of fear of losing my family.

My parents couldn’t accept my gay lifestyle, so I moved in with Tarn, my sister-in-law and mother-in-law. From day one, I was treated I was one of them, with so much love and respect. I’m grateful for their love and support.

As months passed by, our love had blossomed, we got engaged. To celebrate our engagement on March 09, 2012, we invited friends and siblings and the event was held at our friend’s amenities room. We didn’t tell any of our parents about it because we weren’t sure how they would react.

The next two days, I got a text from my dad. He found out about the engagement through a relative that saw the photos of our engagement on Facebook. The message that I received from my dad made me feel shameful and guilty.

This was one of the hardest moments in my life because I love my parents so much and I know they do, too.  I understand their fears of others finding out in the community and judging me for it.

Tarn and I got married on July 09, 2016 and our wedding was magical. Over 300 of our family, friends and loved ones attended. We had it at a big Indian hall. It felt like living one of the fairy tales I read growing up. It was all of what I dreamed of and more.

We knew that after being married, we dream of having a baby someday.

Iraqi-Canadian author Hasan Namir graduated from Simon Fraser University with a BA in English and received the Ying Chen Creative Writing Student Award. He is the author of God in Pink (2015), which won the Lambda Literary Award for Best Gay Fiction and was chosen as one of the Top 100 Books of 2015 by The Globe and Mail. His work has also been featured on Huffington Post, Shaw TV, Airbnb, and in the film God in Pink: A Documentary. He was recently named a writer to watch by CBC books.  Hasan lives in Vancouver with his husband. War/Torn (2019, Book*Hug) is his latest poetry book.

Toronto Lit Up: I Am a Polar Bear and I Am a Beaver