I first met Malcolm Sutton as the fiction editor at BookThug. We worked closely on my book of short stories, and I admired how much Malcolm strove to understand my worldview and the thinking that went into the book. He also designs the majority of BookThug’s fiction covers, and first became involved with them as a book designer. Having someone who understood my book so completely design my cover was a great experience and one of the best parts of working with BookThug. When I heard Malcolm was releasing his first novel, Job Shadowing (BookThug, April  2016), I was excited to read it and see what my editor’s own writing was like.

The book was fantastic. Once I started to read the print copy, I tore through the book in just a few days, even though it was one of my busiest work weeks of the year. I was completely sucked into the world of Job Shadowing. It's a book that takes an imaginative look at the working life of people in this economic time, at art, and at consciousness.

JT: I really liked Job Shadowing. While I was reading, I felt immersed in this world, like it was changing me as I was reading it. It's definitely like something I've never read before -- there are genetically created doubles, a man who becomes a woman's "job shadow", a mysterious yacht... Yet it's all close enough to reality to feel plausible, still connected to this world.

Was that what you were trying to go for? Did you feel like the world of the story is close to our true reality?

MS: I was definitely aiming for plausibility. Their are fantastic elements to the novel, and I realized that character reactions to those elements had to be reigned in. I think that easy acceptance of unbelievable things is part of how we live now. The characters couldn't be shocked by what they encountered or what happened to them. Their reactions needed to be realistic. One other important thing for me was historical markers. So much of this book is a thinking about one's place in history, as an employed person in a certain year with real economic forces bearing down. References to real historical events ground the book (at least I hope that is the effect).

JT: I think it does, and I like that you grounded the book in the contemporary, in 2017 (so one year in the future). So that we don't feel, "Okay, this is supposed to be 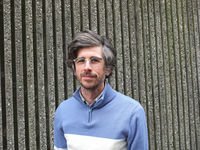 futuristic" with the ability for your character Caslon to make a

double... It seems in the realm of possibility, especially with how much changes within a year.

Do you want to expand on what you said about “that easy acceptance of unbelievable things”? That was one of the things I really liked about it... the tone of the book was very calm and even. These are just things that are happening, nothing is special, and everything is couched in the characters' analysis.

MS: To me this acceptance is present in our current zeitgeist. Perhaps it's a natural reaction to information overload (it's hard not to stumble into cliche here, but . . .). Rather than being dumbfounded or morally outraged by new developments in technology or social relations, we accept them as here and with us, and our reaction is to try to understand their place in our lives (or even to go with them). The two protagonists in Job Shadowing react in different ways to these changes - one with more openness than the other. But I think they both accept them.

JT: Yeah, interesting. The other thing that I felt linked the characters was a desire to be close to others. For Gil, he almost wants to erase his own identity and be absorbed by someone else. When this can't happen in a marriage, he seeks out other avenues. Etti also seeks to merge with others, but her motives seem to be different. It's almost a byproduct of her art and paid work, the love and connection she feels for her subjects.

Gil seems to see a merged consciousness as an ideal. Do you feel this way?

I definitely am not in for that.

JT: Yeah, I think it's idea that's still soothing to us, but as we find ways (I guess like the web) we find that we end up rejecting this idea and finding it even more impossible to communicate.

Both Etti and Victoria are very strong characters with a really strong sense of self. Compared to Gil, who I find to be extremely aimless and passive, or even Caslon who seems to be full of short-sighted ideas, the women are these practical and assertive characters.

Did you find that these characters just developed naturally or were you thinking about making the women stronger characters?

MS: When I started the novel I didn't have anything in mind with regard to the strength of characters. I loved writing the Etti character. She became a kind of vessel for qualities that I have admired in friends over the years. And Victoria was perhaps more challenging because she is younger, of another generation from me, and I think it's always difficult to write a younger person and to understand their anxieties. I'm not sure that Gil is less complicated, but he is, as you say, more passive. As the narrator of the novel he also steps back a little, and is perhaps more guarded in revealing his own feelings.

JT: I still found Gil to be a really complicated and interesting character. It was just refreshing to read something where the women are so assertive and strong. Both are very ambitious, but in different ways.

I wanted to talk a little bit about your writing life because I think you have a unique experience there. I know you as my own editor at BookThug, where you also design the book covers.

I was wondering if the process of working as a fiction editor, and then taking that fiction and transforming it into something visual, has had an impact on your own fiction writing or if you see them as distinct. 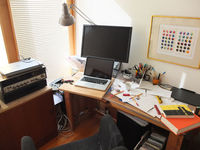 MS: I see them as distinct. Book covers are a strange beast, and often a shock to the writer who sees a representation of their book for the first time. I mean, of course it is shocking! A novel or collection of stories is a vast and complicated thing, and then to have a single image represent that complexity . . . I aim for simple book covers, with an image that is somehow emblematic of the text. I could say a lot more about it, but that would be another conversation. To answer your question, though, the visual world seems to use a completely different part of my brain than the written world.

JT: Cool! What about the editorial process? Did it feel weird to be on the other side?

MS: It felt great to be on the other side. Being an editor has made me very receptive to editorial suggestions. It was like going for a massage, having so much attention paid to me.

You can pre-order Job Shadowing here.