Jacqueline Valencia, a Toronto poet and critic, has been organizing the Toronto Poetry Talks on Racism and Sexism in poetry for about a year. This summer, the talks will be held at the Toronto Metro Hall on June 11th, where discussion will be held about some of the structural problems within literary communities, especially in regards to gender and race.

Along with planning the Toronto Poetry Talks, Jacqueline is part of the Meet the Presses collective, which puts out the Indie Literary Market once a year. Her first book of poetry, There's No Escape Out of Time, (Insomniac Press) will also be released this spring.

I asked Jacqueline about planning the talks, what inspired her, and the future of the Toronto Poetry Talks.

JT: The issues of racism and sexism in poetry are obviously very important to you, as they are, I think, to most of us trying to contribute to the literary community. Was there a particular “That’s it!” moment where you knew you needed to create a space to discuss race and gender in poetry?

JV: It was a combination of things.

In March and April of 2015, there were a few events which I don’t want to rehash, but they shook the poetry community pretty heavily. The racism in our literary community is everywhere, and at the moment the focus was on conceptual poetry and the appropriative aspects of the practice. Coalitions were born and think pieces were everywhere. I wrote one in response to one of the events. Everyone kept on focusing on these events, but no one was doing anything about the problem: that racism is a problem in our literary networks.

Not only that, but sexism in that same community also came to the forefront around that time. CWILA (Canadian Women In The Literary Arts) and VIDA (Women In Literary Arts) did counts [here is VIDA's counts and here is CWILA's] showcasing the lack of female reviewers and the lack of female poets and writers being reviewed. It was known, but to see the charts and the evidence made a bunch of people in publishing take note.

Then I attended a couple of poetic conferences where I was seeing the same thing: women of colour and women were being under represented at these things. A lot of people noticed, not just me. So I thought instead of having these discussions as sidebars in the bathroom or at get togethers, instead of having social media wars, and more think-pieces, why don’t I hold some talks. Grab a venue and invite people to discuss racism and sexism in poetry.

JT: I really respect that you’re trying to find ways to problem solve and to “learn to understand each other” when it comes to these issues in the poetry community. It seems that racism and sexism get discussed on social media or very surface-level articles and then more or less dropped. Then everyone goes back to to the day-to-day, no real changes made. Do you have a particular goal for the talks? Are you going to act as a facilitator to guide the talks into deeper discussion or are you going to have it be open with little facilitating?

JV: Since the CWILA and VIDA counts, there have been a little changes, which means people are paying attention. However, just because there have been these changes it doesn’t mean they are enough. We need to see people going out there, and instead of adumbrating change, they need to be making an actual difference. Tear down the walls that keep people of colour and women, and anyone of any disenfranchised orientation, from getting published and/or getting reviewed.

For example, last year there was an international literary festival in Toronto that had some big name poets on its poster, but most of those poets were white and male. There was a bit of an uproar on social media about it, but people who reading and attending this festival didn’t care. No one really did anything about it except write about it on Facebook or Twitter and more often than not, those write ups and comments became personal attacks. In turn, those accused would rather ignore, block, or unfollow than address the issue head on. Their defense would be to say that their art or their message was misinterpreted. The problem with that is that when an artist forgets that their audience has the ultimate say in how they react on their art, then they fail as an artist. You fail as a poet and an artist if you are unwilling to listen to your audience and ultimately your consumer, unless of course, you are only making art for an elite few. So I ask who is being oppressed and repressed there? Not the artist. 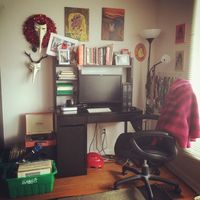 This isn’t to say that there can’t be change that includes social media. There is great power there and I admire anyone doing the emotional work speaking out to the public about injustices in our community. But imagine the impact if one of those white male readers had taken a stand and instead of boycotting the event, gave up their spot to lesser known poet of colour or female poet? What if they just introduced into their talk? I mean, it’s little things that make a difference, but what’s important is that there are many individual things one can do to create change and ripple effect in the real world.

The talks themselves will have several moderators, but other than posing questions to the audience and addressing them for a bit, the main discussion will be with the audience. Think of going someone’s house and having a conversation with new people you’ve met. It will hopefully be pretty open, but I hope to foster a safe space where we can discuss the issues and heal somewhat. I don’t aim to solve anything per se, but to have a personal conversation with people about the issues that affect the poetry community. We’ve focused on racism and sexism for now, but who knows? If I gather that we need to extend it into more territory or if the audience guides us that way, we’ll take it there.

JT: What challenges have you experienced so far in organizing this event?

JV: I have a good group of people that helped me hash out ideas for the talks and venues. I am extremely thankful to John Bell, Matt Carrington, Kate Sutherland, Evan Munday, Helen Guri, and my colleagues at CWILA. They all kept these talks on track as far what I had in mind and they were were invaluable support and collective resource. Sonnet L’abbe and Sachiko Murakami and I recently gave a talk as part Lit Bang! last year which also helped form much of how I hope the talks will shape into.

So far we’ve enlisted Lillian Allen, Mahlikah Aweri, and Banoo Zan to help with some of the facilitating, but there will hopefully be more folk to help out.

I guess, the biggest challenge has been to find an accessible venue with a good location. It’s hard because I don’t know how many people would be interested in this event. We were very fortunate to be given Toronto Metro Hall for the event. I’m still looking for a good nighttime venue to have some readings and fun after the talks.

JT: Do you see the talks as becoming an annual thing? How can we keep the conversation going after the talks are over?

JV: I would like to see the talk become something annually, however, it all depends on my energy and how this event goes. I don’t like forecasting ahead when it comes to this stuff because people forget that change should start with now. You can plan to write a book, but the book will only be written the moment you sit at your desk and start doing it.

I’d like to get a publisher involved or a magazine so we can do a call for papers after the talks. That way people can read and parse the discussions we’ve had.

I know that I’ll have things in the back of my head wherever I go as a writer in Canada. The best I can do is speak out when I can do the emotional work to do so.

Make sure to check in regularly to the Toronto Poetry Talks website for more information on the venues, events, and how to get involved!

The views expressed in the Writer-in-Residence blogs are those held by the authors and do not necessarily reflect the views of Open Book: Toronto