I posted the first half of my interview with four exciting writers-to-watch, Noor Naga, Sofia Mostaghimi, Kristel Jax, and Faith Arkorful, earlier today. We talked about writing into dark places, what their subject matter is, when these emerging writers first started to get serious about their writing, and life rage. It turns out the early days of adolescence were fraught with growing pains and incredible seriousness for Noor, Sofia, Faith, and Kristel.

The interviews occurred over G-Chat with a loose style that allowed Noor, Sofia, Faith, and Kristel to start a dialogue with each other, that they will hopefully continue after the posts are done!

The second half of our conversation continues below.

Jess: Speaking of life rage, what are you all working on? And how do you feel about publishing? Is it something you plan/hope on doing in the near future?

Sofia: Well, I killed a story on Monday by accident (worked it too much, too soon) - so I picked a story back up that I started writing during the summer. It's inspired by Britney Spears, is all I'm willing to say.

Noor: Jess, your ability to pull out Britney in denim on such short notice is impressive.

I've been working on a novel set in Dubai for the last 5 years, and rewritten it so many times, I've lost count. But anyway, I finished it a few weeks ago, had a minor meltdown, bought an impulse ticket to Dubai (hence the 5am gmail chat), and ever since the depression passed, I've been editing.

Jess: I always get depressed when I finish something too after the initial high! I'm glad you're back to working on it. 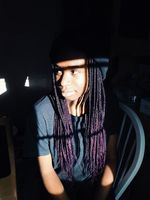 Faith: I made up a fictional island in my head a few months ago, I guess it’s a mix between Toronto Island and my parents’ homelands - I feel like I'm still in the process of discovering what it means to be Canadian, but what it also means to be the child of immigrant parents - sometimes you're not sure what to grab at, what parents of each place you can claim for your own identity - so I guess combining that anxiety in this one place. It's a bit of a process, writing these stories, as I come into what exactly this identity may mean. I've written two stories about it thus far. It’s hard to write when I'm in school! I feel like my stories end up sounding like essays.

It’s so hard to know when to stop writing, when to put the pen down.

Sofia: Faith, I know! Sometimes I feel like if I stop at the wrong time the entire flow will be lost and the story too.

When the writing is good, it is like a high... followed by a hangover.

Jess: The worst hangover, plus breakup, plus your whole family being mad at you, plus pet death.

Faith: Sofia - exactly! Do you usually begin your stories from the first sentence? I often find I write the last paragraph and work up.

Sofia: Yep - the first sentence is what comes to me usually (the voice, whether first or third) and I work down from there. I don't usually write the ending until I've figured out what the story's about, re-worked it, and then I write the ending.

Faith: Sentences come to me all the time. I have a big word note in my phone filled with sentences, or little ideas (often things people around my have said). When you start a story, is it a sentence you've thought of, or just an idea? Sometimes I take a bunch of them and see how they connect. I ask because even starting for me is so hard. I don't know when to start as much as I don't know when to end.

Sofia: I'm sincerely jealous. I'm very good at starting things .. less good at finishing. My best stories I find come from sentences (because I guess they come from a voice, which captures some feeling) - the ones from ideas end up boring me and I never start, or write more than a paragraph.

Kristel Jax does pretty much everything.

Kristel: Faith, I totally write in my phone, it feels so chill. I've just accepted that that's where I start things now.

I write for work so I'm working on an interview with Michael DeForge, who does really intense comics, and with Bunny Michael, this kind of cyber punk rapper from New York, and crys cole who is a minimalist sound artist from Winnipeg, and a piece on the show Hoarders and, like, its therapeutic value. I just finished a big thing on drone music. And I'm a musician; I've been working on an album about spousal abuse and identity for about 4 years. And I'm still doing that, and I'm putting together a tape of music I've made from the radio. I don't work on fiction that much because of all this stuff... but I have a few short story projects I'm working on that I'd rather be really private about. At the EW reading series I read a story about a bunch of creepy guys I know. Which Jess was there for! I do want to publish, I'm hoping to have my stories get to place where people can read them again this year. I was touring in my old band and in general I take forever making fiction perfect. I'm rambling so much. I have no idea what I'm doing, where's that picture of the dog in space? I'm that dog.

All of these dogs are me: https://www.google.ca/search?q=i+have+no+idea+what+i%27m+doing+dog+meme&espv=2&biw=1330&bih=713&source=lnms&tbm=isch&sa=X&ved=0ahUKEwjC38K3oo_LAhVmhYMKHeoKATEQ_AUIBigB&dpr=0.9

Jess, how long do you stay sad for when you finish something? I'm only sad if I'm not busy. 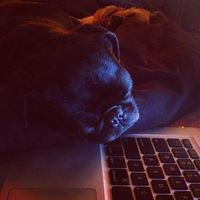 Kristel says sleep is important to productivity. Lana knows this too.

Noor: Jesus, Kristel! Do you sleep?

Jess: I don't know! It depends. I am working on how not to be sad. I used to just work on stuff, stay busy, now I'm trying to find another way. I will let you know the secret of happiness, forever.

Kristel, it sounds like you're go go go go, not that dog in space at all.

Kristel: Noor, PEOPLE ASK ME THAT A LOT! The answer is, Yes, sleep is really important, otherwise I'm horrible at everything.

Jess, what are you trying now?

Jess: I guess just trying to be more in the moment, learning to enjoy things as they happen, and to not like overwhelm myself with tons of things to distract myself! 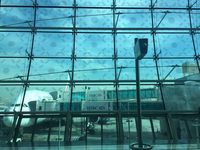 Noor waits to fly back to Toronto.

Kristel: I feel like for me writing is a thing that hangs-over me / hangovers over me, while I'm doing it, and when it's over I'm just so happy. But I remember this Vonnegut thing about how you paint a picture and you get to look at it and feel awesome, but you finish a book and you just want to Never Look At It Again.

Noor: Yeah! Why is that? Why is everything shit when it's finished and only this full-of-potential sublimity when you're still working?

We wrapped up our interview, and Noor prepared to fly back to Toronto. Make sure to keep looking for new publications by these four writers -- I'm sure you'll be hearing more and more about them in the years to come.