I’m not one of those writers who makes everything up completely from scratch. And seriously, do those writers even exist? (If they do, I am jealous of them.)

In my fiction, almost everything comes from something else. Snatches of overheard dialogue, a fascinating anecdote someone tells me, real-life tension I observe, a bizarre news headline, a weird new trend, a childhood memory (mine, or someone else’s if they give me permission to use it), an intriguing interaction between strangers that makes me start wondering about them, my own worst fears, the aspects of myself that I’m most ashamed of—it’s all material!

I try to make a habit of writing these bits and pieces down when they present themselves to me. And when I’m working on a story, I can flip through my notebooks (I have a whole shelf of them at home—this is it here!) to see if anything jumps out that fits with the tone of whatever I’m working on. 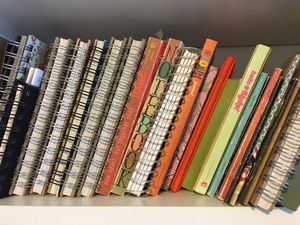 Then my brain starts forming connections, filling in the blanks, mixing and matching, fleshing out characters, imagining new details, and thinking up a plot (which should have its own internal logic, and not simply be “this is how it happened in real life”). And during that fiction-making process, the previously random bits and pieces begin to feel much more deliberate as they become anchored in the story (and usually—but not always—altered in some way).

There is so much richness to be found in our own unique experiences of the world. If you pay attention (and you’re a writer, so of course you’re paying attention), your own thoughts and dreams and joys and worries and the particular details that only you notice can all work together to power your fiction or poetry.

I’ll attempt to illustrate these points with this (partial) dissection of “Baby Can’t You See,” my short story about relationships gone bad. I’ve only explained the origins of selected excerpts, so that this post doesn’t go on forever. The full story can be found in my collection Things Not to Do, and also appeared in the wonderful THIS Magazine a few years ago with this illustration by Hartley Lin (under his pseudonym Ethan Rilly) that completely filled me with joy: 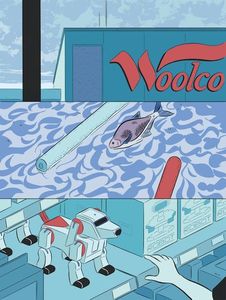 EXCERPT: Darlene has a small satin pillow hanging on the doorknob of her bathroom. It’s shaped like a heart and reads, I’d rather be in Paris. She has never been to Paris, but she can relate.

ORIGIN: I was at a party and this very pillow was hanging on the host’s bathroom door, and I was enthralled by it. It was hilarious to me, especially because the host didn’t seem like the sort of person who would have a heart-shaped decorative miniature pillow that said “I’d Rather Be in Paris” hanging on her bathroom doorknob. I started thinking about a character (not the host) who might have this object in their home. Then I started wondering where the (fictional) object came from, and when I considered that it might be a gift, suddenly I had the idea for the friendship between the two women in the story, who actually aren’t very good friends at all.

EXCERPT: The parents were away and that was a good thing because the whole point of the party was that Jordan had put a fish in the pool. It was a big fish that he’d caught in a lake. Everybody was like, “Can it survive, though? In the chlorine?” And the answer was no. The fish had beautiful shimmery grey and brown scales. It was gliding around the pool, but very slowly. The girls were screaming, “It’s going to bite me, it’s going to bite me!” The guys were throwing quarters at it and taking bets on when it was going to die.

ORIGIN: I overheard a conversation between two people who were probably in their early twenties, and the guy was telling the girl that he’d been to a party where someone had actually done this, and the boys at the party had actually tossed quarters at the poor, dying fish in the pool. The guy wasn’t bragging about it but he also didn’t seem particularly sad about it. The girl was horrified, though.

EXCERPT: Before the tornado hits, a satisfied customer is saying, “Your smoothies are amazing.” Kyle winks. “The key is frozen bananas. They give it the ice-cream mouthfeel. Always use frozen bananas as your base and you can’t go wrong.” Then boom.

EXCERPT: Melanie didn’t really go out with Jordan in high school. She just fell in love with him that day at Woolco, when he was riding a skid full of dairy products and pretending it was a giant skateboard. He rolled past Ladies’ Clothing where she was folding sweaters, and sang “Two Princes” by the Spin Doctors like it was meant for her. Realistically it was probably meant for Darlene in Towels, but it seemed as if it could be for her, Melanie in Ladies’ Clothing. Because Jordan was looking at her when he was singing it, pushing that yogurt-and cheese-laden skid along with one of his powerful legs, with his curly dark hair and cute squinty eyes, and she pictured them doing fun and wacky things together such as announcing their love over the Woolco P.A. system. They had the code to be able to do that.

ORIGIN: I worked at Woolco when I was in high school and I used to make furtive, silly announcements over their P.A. system. I also had a major crush on a guy (not named Jordan) who worked there. One day he actually rode past me on a skid and sang me that song, and it was one of the most magical moments of my young life.

EXCERPT: “Gary,” Kyle’s mother will say in front of him, to his father, “remember when poor Kyle got lost in the mall, and we finally found him in that gadget store that sold the electronic pets, and he was crying so hard we couldn’t understand what he was saying?” And his father will slap his knee: “Hahaha, yes, poor little guy. He threw up too, didn’t he, from all the distress?” Kyle had stopped to pet a robotic dog that was red and white and made a continuous “Yip, yip, yip” noise. Its tail wagged when he ran his small hand over its smooth body. It had no fur but that was okay, he would love it anyway. It was the cutest robotic dog he had ever seen. And then he looked up and his parents were gone.

ORIGIN: My husband (who is not named Kyle, and who is even better than the Woolco guy) told me he once got lost in a department store when he was little (but he didn’t throw up). His parents are kind people, though, and would never tease him like this. Also, when I was a kid I didn’t have a robotic dog, but I did have a red-and-white Tomy Dingbot and I loved it a lot. 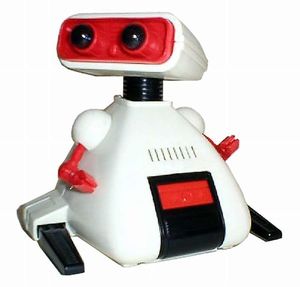