My little sunroom office at home (which is also our dining room) faces a fairly busy street, so when the weather’s good and our windows are open, bits and pieces of random conversations drift up to me as people walk by.

Their voices are only in my ideal listening zone for about 30 seconds before they fade away, so it’s almost impossible to figure out the exact subject matter. But I might get a clue from the person’s tone as they attempt to explain something to their companion—do they sound urgent, enthusiastic, matter-of-fact, bored? I like trying to guess at their relationship based on what they say to each other, and also what they don’t say.

I love eavesdropping on strangers. I used to get extremely annoyed on the streetcar when fellow riders would gab at full volume on their cellphones, but then I realized the value of those one-sided snippets of dialogue (especially now, since most people would rather text than talk). I stopped rolling my eyes and started frantically transcribing, because those public-broadcast slices of life are fictional gold.

Out-loud, in-real-life conversations are full of tension and yearning and drama. Even the ones that seem the most banal, because there’s still so much at stake. Because when people express their viewpoints or describe their experiences, they’re trying to be understood. I love that sense of people grasping at connection, and I enjoy writing characters who fail at it.

In any conversation, we put our observations out there and wait for the other person’s acknowledgement. We twist our words around in order to present our personal stories in the best possible light, and to get the reaction we’re hoping for. There is so much fun to be had with the fictional possibilities of this reality—to practise duplicating it with made-up characters. As an added bonus, dialogue can be a very effective and immediate way to reveal aspects of a character’s personality and motivation, and to hint at what’s really going on behind the scenes.

I’m personally a fan of more “realistic” dialogue, which in my short stories is sometimes slightly stylized, but it’s basically a condensed version of how people talk in real life. Condensing is important because there are plenty of irrelevant scraps in real-life dialogue—the um's and ah's and so on—that do nothing to move the story forward.

To keep my characters’ speech from sounding stilted (unless I want it to sound awkward on purpose), I’ve learned to listen not only to what people say to each other, but how they say it. I try to imitate the rhythm and cadence of their speech. People also rarely speak in complete, eloquent sentences. Lines of dialogue can be choppy and thoughts can be unfinished. I also like to listen for what might be going unsaid just beneath the surface of seemingly friendly chitchat; subtle suggestions that something might be amiss.

People also rarely come out and say what they actually mean. They dance around what’s bothering them and choose passive-aggression over directness. If you’ve ever heard the expression in a fiction critique that something is too “on-the-nose,” this means that the writing feels wrong because it’s actually too right. Even if everything in the story is leading a character to say something, they will still likely veer away from saying it, because that’s human nature. You might have a climactic scene where that character finally comes out and says what’s really on their mind, but again, that’s only in a specific set of circumstances, where they’re basically forced to say that thing.

I’ve been particularly inspired by the realistic-but-stylized dialogue in the short stories of George Saunders, Lorrie Moore, and Joy Williams; the plays of David Mamet; and in my favourite films by the Coen Brothers—Raising Arizona, Barton Fink, Fargo, and The Big Lebowski.

And I’m going to leave you with an excerpt from “What to Wear,” a short story by Greg Kearney from his darkly hilarious collection Pretty, which is one of my favourite books of all time. This section makes me guffaw embarrassingly loudly whenever I read it, and also does a fantastic job of (along with all the other good stuff I’ve mentioned) showing how dialogue can increase the pace of a story and infuse it with energy. The following scene takes place in a car between Ron (the first-person protagonist) and his personal-trainer sister Sheila, who is driving them somewhere, badly:

I don’t know where we’re going. We run an amber light.

“Should you be telling me all this?” I say.

“I love it! It’s freaky how much I love it. Sometimes I just catch myself and I’m like, ‘do you have any idea of how fulfilled you are?’ And I totally don’t. Because I’m just so happy.”

“That is so great. Where are we going?”

“That asshole is following too close behind me! Umm. Tammy’s.”

“The place I’m taking you. Is called Tammy’s. It’s on the Danforth. It’s a—oh, what do you call it?”

Red light. Sheila is rocking back and forth in her seat. “Ron. I’ve missed you so much. Are you sure you’re okay?”

“I do? Really? I’ve been feeling a little insecure.”

We’re in the right lane, about to turn right, when we’re broadsided by a minivan. 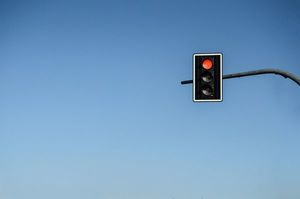