When I was eleven, I was diagnosed with scoliosis, a curvature of the spine. It was my ballet teacher who first noticed that something was amiss; I could see it in the curiosity and concern that splashed across her pert, freckled face, as she leaned down and placed both hands on my hips and tried to remould them. My mother took me to my pediatrician, who referred me to an orthopedic surgeon at the hospital, where I had multiple x-rays. The curve at that point was serious, but not serious enough to merit intervention. Not yet, at least. I held my breath.

But over the next six months, the curve worsened precipitously. I was told that one side of my vertebrae was growing faster than the other, causing the spine to buckle in a lopsided S, though no one really knew what was causing this to happen. I sat through these doctor’s appointments in a state of numbness, the shiny surfaces of the exam room appearing as bright and insubstantial as the words I was hearing. 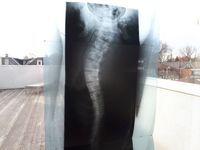 For the next two years, I wore a fibreglass back brace that buckled around my torso, like a heavy corset, constricting my lungs so that I could only breathe in their upper portions. I felt like I was constantly hyperventilating, on the verge of a panic attack. When bracing failed to yield results, I spent six months in a body cast. When that didn’t do much, I was rushed into surgery: a metal rod was inserted mid spine, four vertebrae fused at the base. From that point onward, I would have very limited spinal flexibility, except in the neck and top part of the back.

During those years in my early adolescence, I became extremely bookish and inward looking. I think that I’d always had these traits, but they now intensified. Not surprising, really, that I looked for consolation in reading. While other girls were out living their normal, horseback-riding, fun-filled lives, my body wouldn’t allow me to live my life, I felt, and so I looked for the comforts of vicarious pleasures. My reading tastes were somewhat eclectic, at the time. While I was interested in a few literary authors on my mother’s bookshelf — Margaret Atwood and Amy Tan come to mind — I also gravitated toward crime writers, like P.D. James. I think I liked the sense of solvability and resolution offered by mystery novels, by contrast to the never-ending enigma of what was going on with my body. I also read a smattering of novels that my mother referred to as “trashy”; she’d buy them at the drug store and bring them on our summer vacations.

Six months after my back operation, I had my follow-up appointment, where x-rays revealed that my curve had not been corrected. Despite the rod and fusion, my curve had migrated back to how it’d been pre-surgery. Plus, I now had side effects to deal with: stiffness and discomfort in the neck, shoulders and back, and nerve damage including pins and needles in one thigh and a boiling hot foot.

I was devastated. I felt like I was being brought face to face with the absurdity of human existence. Again, the pleasures of a textual existence beckoned to me: a world comprised of nothing other than language, which would always be there for me. Language seemed so much more stable than the vicissitudes of my body. Although catastrophes and bad things happen in literature, of course — would it be at all interesting, if they didn’t? — there’s a carefully calibrated system of ups and downs, variations in fortune, which the author puts into play. Not just the random crap that life dishes up.

Even today, many years later, I find myself still affected by that time in my life. Over the years, my body has learned to live with its imperfections and compensate for its imbalance, with the help of yoga, meditation, and exercise. I’ve noticed in photographs that I tend to stand, unconsciously, with one knee slightly bent and my head cocked to the other side (perhaps people think I’m trying to look contemplative).

Whenever I’m in the midst of writing a novel that I’m excited about, my aches and pains are not nearly as pronounced, and everything feels quite balanced and bearable, as though the writing process releases some pleasurable chemical into my blood. Somehow, I just feel more aligned. I wonder sometimes about what’s going on here. Does writing help to distract myself, daily, from the persistent worries that pop up about my body’s inability to heal itself — the sense that onrushing disaster may be just around the corner? Am I finding a way to channel this strange, at times obsessive sense of mischance into the plots of my writing and the problems that my characters confront?

Yet I don’t feel this tells the whole story. It isn’t all about escape or using writing to take myself out of my body, I hope. Although we might think of writing as something quite cerebral, strangely enough, in the act of writing, it doesn’t feel cerebral. Instead, it seems like it’s heightening my sense perceptions, within my flesh and bones, and slowing time down, in much the way that a meditative stroll on a balmy day would. The important thing, I think, is to treat it like walking: something you would just do, without judgment or self-assessment, taking curious interest in where the feet lead you, where the words lead you (more on this in a future post, perhaps). Writing as a form of consolation, coping, pain management, dealing with. For this, I’m grateful.