Before beginning a project, is it worthwhile to do a detailed outline? Or is it preferable just to dive in? I’ve tried both approaches. In writing my first novel, After the Bloom, I outlined extensively. For my second novel, Red Oblivion, not at all. To some extent, I believe that every book requires its own distinct methodology; what works in one instance won’t necessarily be transferable. That said, I have to say that I had more fun writing my second novel, working without an outline. The writing seemed to unfold more naturally.

With the current project I’m working on — a novel based on my maternal grandmother’s coming of age on the Queen Charlotte Islands, during the First World War — I’m also going at it without a summary of how the narrative should proceed. I have a general idea of where things will go: an arc that’s simple enough for me to hold in my head, drawn from the family lore that provides my inspiration. I have in mind certain key nodes of the story, but how my characters will reach these critical points will be determined in the course of the writing. In other words, I’m giving my characters the room to breathe and guide me, as they take on lives of their own on the page. I want to be open to letting them startle me and awaken my senses.

For my first novel, After the Bloom, I had an exhaustive, complex outline that stretched across the wall of my office, like the whiteboard of a police team immersed in solving a murder. Arrows and little scribbles everywhere. This in addition to eight pages of chapter by chapter summary I’d typed up on my computer. This master plan I was continually having to rejig, because my actual writing kept swerving off course, failing to match up with my vision. Looking back, I think that this drive to acquire a bird’s eye view exacerbated certain perfectionist tendencies, which hindered my writing process. It just didn’t feel good in my body; the whole thing made me anxious. In the end, I believe I made most headway by stepping back from the outline, holding on to only its most elemental features.

One might think of it as a bit like planning a road trip, perhaps. You probably want to have a final destination and a few key cities or towns you’d like to stop at, along the way. But a great deal of the fun on such trips is the unexpected. When I was a kid and my parents would take me on driving vacations, my father was a proponent of not over-planning. “Let’s just play things by ear,” I can still hear him saying. This meant that we did not have all hotels booked in advance or a clear itinerary for some days.

As I think back, it was these unplanned stretches that allowed interesting, memorable things to happen. On our trip driving down the coast of California, when I was ten, I recall many instances of getting lost for hours and frantic conversations at gas stations, until we’d finally arrive at little, hole-in-the-wall towns, close to midnight. We spent one night at a fleabag motel called the El Dorado Inn that was straight out of film noir. The wall of our room had a badly plastered section, where it looked like somebody had recently punched a hole. The tavern at the front was full of bikers, raucous drinking pouring over into the parking lot. After my parents had gone to bed and I couldn’t sleep, I sat by the window and peered out the slight opening in the curtains, fascinated by this glimpse of life outside my little bubble.

And I was thrilled that I was able to convince my parents to detour for a day to San Jose, so we could visit the Winchester Mystery House. In the lobby of our hotel in San Francisco, I’d come across a brochure about this sprawling mansion, which once belonged to Sarah Winchester, heiress of the Winchester firearms fortune. Sparing no expense, she’d built this peculiar, haphazardly designed mansion to confound the ghosts of those killed by Winchester rifles, whom she believed to be haunting her every day. How intrigued I was by the secret passageways and multiple staircases leading nowhere — an architectural embodiment of a mind gone deranged. Although I know that we also visited Busch Gardens, Disneyland, and Universal Studios, and enjoyed many afternoons at the beach, the truth is I remember very little about those episodes. It’s the out-of-the-way, stumbled-upon places that have stayed with me all these years. 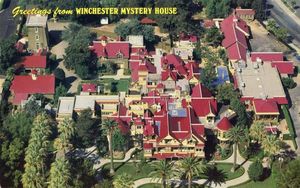