I think my journey to becoming a published author is the combination of five things— luck, need, hustle, talent, and grit.  I have traditionally published 6 books in four years without a creative writing degree, wealthy benefactor, agent, or publishing professional friends in the industry.  Often, my opportunities came from meeting the right people in the right places and being ready.  This post is the first installment of START TO FINISH, The Story Behind the Story.

Given that the 92nd Academy Awards aka the Oscars aired yesterday (Sunday, February 9, 2020), I think it natural to start with my journey to publishing HARRIET TUBMAN: FREEDOM FIGHTER.  The feature film Harriet was nominated for 2 Oscar awards— for Cynthia Erivo as best actress and “Stand Up” as best song.  Watching this movie in November 2019, I felt so excited and happy to be a part of Harriet Tubman’s legacy.  Finally, the world will know many of the remarkable accomplishments of this amazing person. 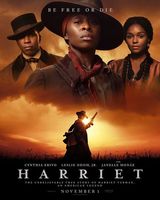 How do you think an author like me got the opportunity to write and publish an early reader biography about such an iconic African-American figure as Harriet Tubman with one of the five biggest U.S. book publishers?  It all started in June 2015.  I attended the 21st Children’s Non-Fiction conference in Riverside (a part of south Bronx), NY.  There I met several publishing industry professionals and fellow writers.  One of these persons was editor Tamar Mays of Harper Collins Children’s Books who I met at a networking cocktail party.  At the time, I was a pre-published author (with 3 books under contract, 2 of these were non-fiction and soon to be released) and going through a marital separation and health issues.  My purpose of this conference was to work on a non-fiction book idea as well as my picture book biography about Jamaican poet Louise Bennett Coverley.  (More on A LIKKLE MISS LOU: How Jamaican Poet Louise Bennett Coverley Found Her Voice, the journey of my newest picture book, in START TO FINISH 2.)

In June 2016, I was at the University of Miami participating in Travel Writing with Faith Adele as part of Voices of Our Nation (VONA) which is a workshop for writers of colour.  So much was going on within my personal life at the time.  My divorce had just been finalized one month before.  I was preparing to move to Abu Dhabi in August to teach and that involved a lot of paperwork and medical details.  Then, to add insult to injury, the room I was staying in had these bugs that got into my food and on my skin, I was trying to make writing deadlines, and my picture books that I had ordered to sell at the workshop were delayed and ”lost”.   My anxiety was high.  That very week, I received an e-mail from Tamar asking if I could write an early reader biography about a prominent African-American for the I Can Read series.  I was so excited and really would have loved to do write this book but the deadline was in one month.  It just was impossible.  I had to turn it down.  Tamar mentioned that there might be a possibility ”down the road” to write an early reader biography about Harriet Tubman.  I insisted that I was the right person to do this and I would be ready.  I knew that Tubman’s life would have been fun to research.  In Canada, Tubman had roots via the Underground Railroad and she called St. Catharines, Ontario home in her lifetime.  Plus, I knew that Harriet Tubman‘s image was slated for the US $20 bill.  I also heard that there would be a movie about her one day.  I was so glad that I had kept “my ear to the ground” and read many random online articles.

A few short months later, I shared a four-paged sample of my writing with Tamar Mays so she could see what I could do.  By this time, I was living in Abu Dhabi and attending a writing group and working on this book.  I remember the first time we had a phone conversation long distance with an 8 hour time difference.  It turns out that my four page masterpiece exceeded the word count and the required complexity of text.  I had to scale waaaaaayyyyyyy back.  I read other I Can Read books.  I wrote and rewrote.  Nevertheless, I conducted my research remotely and wrote the first few drafts of HARRIET TUBMAN, FREEDOM FIGHTER (I got to choose the title) while living in the Middle East.  Shortly before my final draft was due in April 2017, a photo of Harriet Tubman was mysteriously discovered.  The photo was of Harriet at her youngest, estimated her early forties and shortly after Civil War.  I begged Tamar Mays to try to get this photo into my book... and she did.  I also contacted a few experts on Harriet Tubman.  One was selected to vet my book for any errors in the facts or the illustrations.  Professor Kate Larson was this person and she became one of the historical consultants on the feature film as well.

Finally once I moved back to Canada in 2017, I scheduled times to meet with Tamar Mays to go through edits face-to-face at the Harper Collins offices on Broadway in New York City which was whenever I was in town to attend a conference, promote my other books, or spend time with family.  In September 2017, on a trip to receive an Americas Award Honor for my picture book MALAIKA’S COSTUME in Washington, DC, I visited the newly opened National Museum of African American of History and Culture (AAMHC) where I saw original artefacts that Harriet Tubman owned. 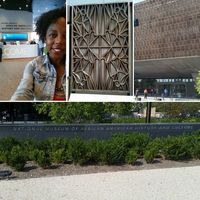 I even made a trip to Philadelphia, PA in fall 2018 where I photographed Harriet Tubman’s church while she lived there. 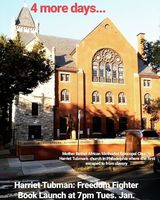 In May 2018, I visited Auburn, New York where she spent her last ten years on the site of her home. Writing an ICR book for Harper Collins, one must be precise, exact, and ever-conscious of the economy of words.  The entire book cannot exceed a limited word count and the vocabulary must be simple enough for young and new readers.  I found this challenging given there was really so much I wanted to write about Harriet Tubman.  Still, I felt this project was right up my alley.  While teaching Grade One and kindergarten at the Africentric Alternative School in Toronto, I found myself adapting tales about Black heroes and chapters of history into ”bite-sized” text that my readers could grasp in songs, poetry, and my own homemade readers.

My finished publication of HARRIET TUBMAN FREEDOM FIGHTER was released on December 31, 2018.  You can purchase it online or at most retail bookstores across North America.  Below, I have included my 4 page sample that I sent to Tamar Mays.  You will see for yourself that the version below is much different than what would become the final book.  Who knows what this version will become one day!  I hope it will keep you pre-published writers inspired.  Watch the book trailer here.  Happy reading! “I need to go back for my kin,” Harriet said.  She had hardly been in Pennsylvania that long, her legs still weary from the journey, her back sore from stooping and hiding.  Her head throbbed.  Could another spell be coming on?  She wondered.  It had been a good while since she had one.  They usually came on without warning.

“Perhaps, it’s best you sit down, Ms. Tubman,” a kindly man said.  It was John Brown, the abolitionist.  “I’ll make you a cup of tea,” said Mary Ann, his wife.  She walked toward the black kettle stove but stopped.

Might it be too late?  Harriet lost her balance, her body fell from the chair and over to the floor.  She rocked back and forth.  She could see everyone and a bright light. The light shining became a star and turned into a dream.  Everyone was there, standing around her.  Harriet trembled and shook while John and Mary moved the wooden stool and the table out of the way.

“I reckon we put a spoon in her month so she don’t swallow her tongue,” John said.

Mary Ann placed her hand on his.  “Leave her be,” she said placing a blanket on Harriet.  The trembling stopped, she lay still like she was asleep.

Harriet Tubman was born a slave on a plantation in Dorchester County, Maryland in 1822.  Some say she was born in 1820 or 1825 but no one is exactly sure on what date or in which year she was born.  Back then, it was rare that a person enslaved would know the exact day he or she was born.  Her mother Harriet Green, called Rit, and father Ben were slaves too.  They named their baby AramintaRoss and called her “Minty” for short.   Rit worked as a cook for one family and Ben worked as a woodsman and managed business on another plantation.  Being slaves meant that Rit and Ben could not stop their children from being taken away.  They could be sold into slavery at another far away plantation.  Three of Minty’s sisters were sold away into slavery never to be seen again.

At some point, Minty changed her name to Harriet, the name of her mother.  No one is exactly sure why.

The slave owner often sent Harriet out to work at other plantations.  Often, when Minty was a child worked as a nursemaid to help new mothers.  There she was often beaten if the baby woke up crying.  One time she was hired to work on a plantation when an escaped slave was returned.  He tried to run away again.  The slave owner threw a 2 pound lead weight and instead of striking the escaping slave, it hit Minty’s head.  She believed that her skull was cracked as she bled for days.  But two days later, Minty was sent back to work.  From that day on, Mintywould suddenly fall unconscious or have an epileptic seizure.  It was difficult to wake her from these spells.  Often she had visions, dreams, and felt that she received special messages from God.  Her fainting and epileptic seizures meant that she was often unable to work, meaning that the slaveowners thought she was less valuable, and therefore she was harder to sell.  Sometimes in her sleep, when she had these spells, she felt she got special messages from God.  Messages that told her how to escape slavery and find her way to freedom.

“We gots to keep going.  We can’t be letting them beat us up like they is.   Keeping us locked in like some caged animal.  Forced to do they work, selling us as they please”.