Festival season is over, and I’m still reeling from all the conversations and questions that have arisen offstage.

What it is about the magic of writers without microphones, with cups of coffee and plates of lunch, spilling in to small rooms offstage, that allow for dialogue that sometimes feels more heartfelt than the ones we have on stage?

Perhaps it’s because we are not pressured to sound like we know what we are talking about, that we can speak from the gut, in between forkfuls of pasta salad.

These offstage conversations have taught me to value what I hear just as much as what I ask.

Where is the magic to be found?

In the moment Rachel Manley turned to me after our panel was over, declaring, “everybody has a memory but not everyone has an imagination.” What does it mean to hold memory without imagination? Is it possible?

It’s in the silence Amanda Leduc and I shared after a packed morning of workshops, giving ourselves permission to leave what is unspoken, unspoken.

It’s in the odds of getting a ride back to Toronto from the Wild Writers Festival with none other than my former professor and kilowatt of energy, George Elliot Clarke. For two hours we spoke about everything from traffic to former-students-turned-authors who’ve have made him proud (we see you, Ian Williams). It’s in the effortlessness of shifting from the etymology of city names to the recollection of lines from Afrofuturist writers. 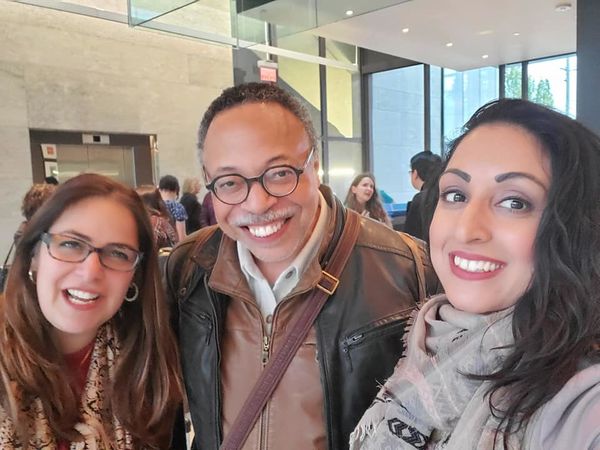 It’s the conversation between my beloved mentee, Natasha Ramoutar and I, over open bags of cookies and hot cups of tea in the author’s lounge at TIFA, where we dreamt up ideas for future panels— on craft and form, in addition to identity politics, homelands and immigration.

It’s in the joy of being held by the generations of BIPOC writers who came before us, setting the path ablaze for us. It’s in Natasha recalling how David Chariandy approached her and her fellow Scarborough authors Tea Mutonji and Adrian De Leon to declare their pride in how they put Scarborough on the map.

It in the strained voices of fellow authors trying to come to terms with contractual obligations that challenge their own ethics. Where do we draw the line, how do we shut off, how do we stay on, how do we remain relevant, and when is relevancy a hindrance?

It’s in remembering that BIPOC writers have choices. We can align ourselves with the vision of the writers we aspire to be, rather than simply agreeing to participate in gigs out of “gratitude” “guilt” or “lack”.

It’s in the hushed conversation in the bookstore after a reading, where I speak to a poet about the challenges of being a BIPOC writer in Winnipeg, that opportunities feel few and far between— the language of his ancestors, the untranslatable words, the pressures within and outside his community— is a heavy weight to bear on his own.

It’s what led to more conversations about how BIPOC find safety in numbers, that we need to advocate for each other across provinces, and acknowledge that we move through spaces of privilege based on our location and accessibility.

Perhaps it’s in the admission that this writing thing can be isolating— that we seek comfort in our own confusion, that we find camaraderie in our challenges, that we see courage in our stories, and yearn to keep telling them—

knowing that we’re not alone.