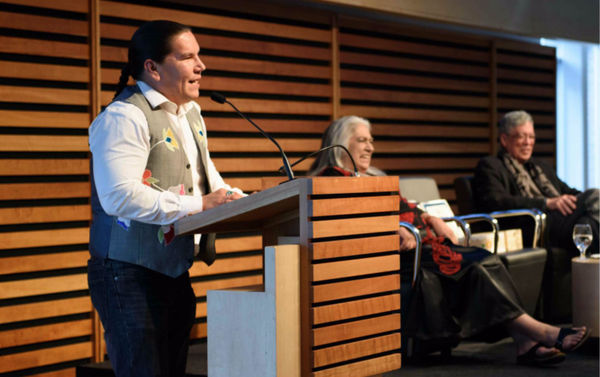 Over the winter I was part of two separate online writing residencies through the Banff Centre. Each cohort involved wonderfully talented writers from across the land, sharing their stories, truths, and life experiences in powerful ways. Both programs were enormously enriching, and I buzzed with inspiration for days after they ended. All of the presentations, workshops, and social gatherings happened over Zoom. They were entirely virtual experiences, and from what I concluded by their reactions and feedback, the participants found it all very worthwhile.

During the preparations for these online residencies, though, I was concerned whether the in-person experience of sharing stories together to learn about writing could be replicated online. Sitting in a room with other writers to hear their work and experiences can be very rewarding and inspiring. It’s a personal, intimate way to hear about practice, form, the publishing industry, and much more. But after closing my laptop at the end of the Banff programs and feeling as fulfilled as I would have in person, I was reminded that just talking to other people - no matter the platform or venue - is an essential part of the writing process.

Humans are vocal beings. We have communicated orally since long before anything was ever documented, either in art or script. As an Anishinaabe author, I often talk about how Indigenous writers come from an oral storytelling tradition, but really, we all do. Spoken stories have been passed down around the world since time immemorial, fortifying culture, language and history, and bringing people of different backgrounds together. In that spirit, I believe that all good writing begins with a spoken story, and it’s an essential step in my own creative process.

Any idea I have becomes vocalized, whether it’s for an article, essay, short story, or novel. That’s usually a natural part of the process, when pitching a story idea to an editor, or even just cogitating aloud to a loved one. To me, that gets the wheels turning, and the more I talk about the story, the more it gestates in my mind, prompting me to write down the thoughts that sprout from the initial one. By discussing it vocally, the story becomes a physical process that my mind and body begin to remember, and I feel the story itself expand in organic ways.

That’s because it becomes a communal experience where essential feedback comes naturally. Speaking a story - no matter how basic or complete - to someone else further refines its elements. Someone else’s discerning ears and mind can help guide a story along its path. They’ll hear things I may not have considered, and fill gaps I didn’t know existed. Facing other people to tell them a story is a profoundly intimate and valuable experience. I find that seeing and hearing reactions is immensely constructive, and I feel engaged in a circle that is usually very supportive.

And clearly, this doesn’t have to happen in person, as was proven to me through the Banff programs. The residencies were forced online because of the COVID-19 pandemic, just like almost every other kind of gathering over the past year. But the people involved ensured the seminars and workshops were enlightening and successful, thanks to their brilliant creativity and openness to share, and viable digital platforms helped that happen. And when Zoom or Skype or any other of those video calling apps aren’t available, a phone call is a wonderful tool in strengthening the spoken story. The pandemic has also prompted me to have regular conversations over the phone with my writing friends and mentors.

For me, at the core of telling these stories loudly is strengthening memory. I recently came across an old video of a teaching by an elder from my home community of Wasauksing. He talked about the importance of our oral tradition in preserving our individual and collective memories. He said by reciting our stories over and over, from generation to generation, we embed them and our culture in our minds, our communities, and the land around us. It’s a lesson I learned when I was younger, but only vaguely remembered. Watching him say that on a thirty-year-old video was a good reminder to continue to incorporate talking into my writing process. I’ve always tried to commit an entire story to memory before I actually turn it into words on a screen.

There’s a common image of writing being a silent, solitary process: a writer hunched over a keyboard all alone. That’s true much of the time, especially during the actual typing process. But I believe there’s important collective spoken work that happens at the front end to help establish a story’s foundation. Storytelling and writing are complementary processes. It takes a community to advance a story. The writer is the conduit.