In her new collection, decorated poet Otoniya J. Okot Bitek plays with form and expectation, rewriting history both colonial and literary. A Is for Acholi (Wolsak & Wynn) sees Okot Bitek rewriting the Acholi's 19th century contact with British colonial forces. She uses bold, witty techniques, hiding poems in footnotes and superscripts, to pay homage to the creativity and flexibility often demanded of diasporic peoples, including the titular Acholi people, an east African ethnic group with roots that extend thousands of years. She rewrites Joseph Conrad's racist texts, offering a genuine portrait to contrast his bigoted one, and explores the complexities of living far from one's ancestral homeland, particularly in a place scarred with its own colonial wounds.

At once a high wire show of literary finesse and a grounded, moving, and bracing call, A Is for Acholi is a powerhouse, and we're excited to speak with Ontoniya today about her writing process as part of our Poets in Profile series.

She tells us about a chance encounter that led to an important piece in her first collection, the iconic Canadian book that taught her that where she writes from "has a history of erasure and power and resistance", and why it's essential to remember that language—and poetry—can be used both for affirmation and for harm. 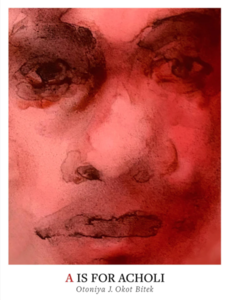 Once, while I was inside the endurance process of writing 100 poems for 100 days, I was on the bus, on the way home, when a man came to the back, sat next to me and started telling me “to be happy to be alive” and that “being alive is better than being dead”. He also said there was nothing we could do about it. I asked him what his name was and he said Walter. So when I got home, I made a poem from that encounter and it became Day 63 of 100 Days poems. In the context of that collection, Walter’s words landed really differently so I was grateful for that strange encounter, afterall.

I generally think about a poem that’s not working as one that’s not ready yet. Or, I’m not yet ready for it. Either way, I give it time. I put it away. There was the one time I insisted on sending in a poem for publication. Got rejected twice. Third editor looked at it then showed me how that poem was three poems crowded in one so when I teased them apart, there was the poem I’d been looking for! So yes, too, to trusting that others might be able to see a poem in a way that you can’t. That awesome editor and also a brilliant poet, is Joanne Arnott.

Both, I think. How a poem welcomes you in and how it lets you go at the end. How a poem’s hospitality is illustrated is worked through the beginning, inside it, at the end and how it lingers afterwards. I’m not suggesting that one should feel taken care of in a poem, but for sure, the poem’s integrity is in the whole piece.

Obit (Copper Canoyn Press, 2020) by Victoria Chang. A brilliant, brilliant book of poetry, oof! In that book, Victoria Chang takes the form of the obituary to write through the process of grief after her mother died. It’s so powerful that I still get goosebumps thinking about this book. Not the most recent books I’ve read, but two book I keep returning to are M.NourbeSe Philip’s Zong! (Wesleyan University Press, 2008) because it reminds me that to interrogate the language I write in. And Dionne Brand’s The Blue Clerk (2018) because it teaches me that where I write from has a history of erasure and power and resistance, too.

Best thing about being a poet is that all language is your playground and you can do whatever you want within the raison d’etre of the poem. Worst thing about being a poet is recognizing that language can be resistant, and that others in the playground – artists, poets, powerbrokers – have also used to the same language to oppress people and abuse power. Not really the worst thing, just seriously humbling to know that writing poetry is serious work and can be life affirming, or harmful.

Otoniya J. Okot Bitek is a poet and scholar. Her collection of poetry, 100 Days, was nominated for several writing prizes including the BC Book Prize, the Pat Lowther Award, the Alberta Book Awards, and the Canadian Authors Award for Poetry. It won the 2017 IndieFab Book of the Year Award for poetry and the 2017 Glenna Lushei Prize for African Poetry. From the fall of 2020 to the spring of 2021, Otoniya was the Ellen and Warren Tallman Writer-in-Residence and one of the SFU Jack and Doris Shadbolt Fellows. She has recently moved to Kingston, Ontario, to live on the traditional territory of the Haudenosaunee and Anishinaabe people. Otoniya is an assistant professor of Black Creativity in Queen's University, Kingston.

A Is for Acholi

A Is for Acholi is a sweeping collection exploring diaspora, the marginalization of the Acholi people, the dusty streets of Nairobi and the cold grey of Vancouver. Playfully upending English and scholarly notation Otoniya J. Okot Bitek rearranges the alphabet, hides poems in footnotes and slips stories into superscripts. The poet opens up ways of rethinking history as she rewrites both the 1862 contact of the Acholi people with the British and the racist texts of Joseph Conrad, while also searching for a way to live on lands that are fraught with the legacies of colonization, similar to her ancestral homeland. With writing that is lyric, layered and deeply felt, the poems in A Is for Acholi unfold maps of history, culture and identity, tracing a route to a present where the poet dreams of writing a world without empire.