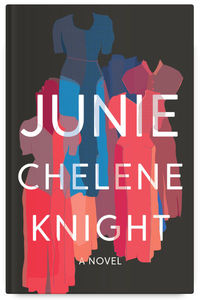 In 1930s Vancouver, Junie and Maddie move into Hogan's Alley, a vibrant Black and immigrant community in the East End. Things look hopeful: jazz singer Maddie has talent and ambition and her young daughter Junie makes new friends quickly. But difficult times lie ahead – from Maddie's issues with alcohol to the prejudice, hatred, and inequity that will pull Junie's once-hopeful community apart in the years to come.

Junie (Bookhug Press) is celebrated multi-genre author Chelene Knight's newest book, and it showcases her talent for truth-telling, with authentic characters who leap from the page and neighbourhoods that feel like you're right there on the sidewalk with the locals.

Following Junie into adulthood, the novel is gripping, wise, and thoughtful, celebrating the Black lives Knight creates on the page while unflinchingly charting the unjust barriers her characters struggle against. Junie shines throughout in both third and first person perspectives, from child to woman, an unforgettable character.

We're excited to share an excerpt from Junie today, courtesy of Book*hug Press. Here we follow Junie as she explores her new world, meets a friend who will become important in her life, and witnesses the subtle early warnings of her mother's growing addiction.

Excerpt from Junie by Chelene Knight:

I PRESS MY FACE against windows—shops, cafés, hardware stores, and boutiques. The misshapen, uneven, rusted metal sheets used for fencing in some yards are charming. I take note of the sawdust, hickory, and smoke in the air. The whistle of the trains in the distance, a sign of dialogue. The men who work on the trains walk to work looking regal in their freshly pressed uniforms. My thoughts deviate and I wonder about all the pain they carry when they walk back home. I wonder if rest ever finds them. What colour would that be? I can’t stop the questions that pour in. The men who work on the trains cater to white folk, making sure they are comfortable. I’ve heard the sleeping car porters are on call twenty-four hours a day. Polishing some man’s shoes deep into the night or carrying in some drink, careful not to spill as the train jostles. All day. All night. But why? Why does the world want to drain the soul out of them? What would it look like to just breathe and think and paint and slow down and just exist? My ears perk up as bits and pieces of conversations swim through the open curtainless windows I pass. I follow the loud yelps from men sitting on the steps outside, passing a cigarette back and forth, and ogling the finely dressed women walking by. I need to capture all of it. I want to make the world sit inside this beauty. Then, I hear Mama’s voice telling me to stop asking so many damn questions, even the ones in my head, and my thoughts simmer down to a dull hum. 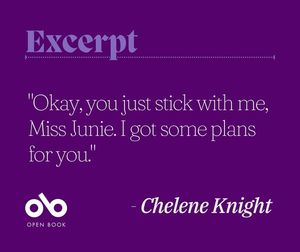 Junie surveyed the room as she entered the poorly lit, cramped classroom. She spied a small window and was instantly hypnotized by the rain that pelted down on the outside of the glass. Miss Shirley’s voice cracked open her concentration. She couldn’t hold back her nervous smile as she tugged at the hem of her homemade dress patched together by someone else’s mother, and made from a thin fabric that itched. Junie wriggled her bony but lotioned knees, bending them awkwardly underneath her dark stockings. She caught a glimpse of a smiling girl in the back row, her hair gleaming. Junie’s own hair was self-braided into thick pigtails that jutted out at an awkward angle because she could never part her hair evenly. The girl’s shoes were a pristine, glossy red, like roses dipped in melted pig’s fat. Junie had never seen anyone wearing shoes so fancy, at least not at school. Her heart fluttered. She looked down at her own shoes, one sole still running away.

“Class, this young lady here is Junie. She and her family just moved here from the other side of town, and I want you all to make her feel welcome.” Miss Shirley had her thick hand planted on Junie’s shoulder as they both stood at the front of the class. Junie fought the urge not to look up at the berry red of her lips.

“Now you go on and take that seat next to Estelle there.” Miss Shirley pointed at the girl with the gleaming tresses, who immediately sat up straighter. “And, Estelle, you share your reader with Junie until I can get her one from storage, you hear?”

“Yes, Miss Shirley.” Estelle fussed around in her desk and pulled out her book and scooted herself closer to Junie.

“No, she has a friend who makes them for her daughters and gives the ones that don’t fit them to me.”

Junie ran her palms over the fabric and looked up at the front of the class where Miss Shirley was fumbling through a desk drawer and shuffling papers.

Estelle cut her off and raised her hand to Junie’s face. “Okay, you just stick with me, Miss Junie. I got some plans for you. For now, here, let’s start looking at chapter six before Surly comes over here huffing and puffing.” Estelle shoved the small book between her elbow and Junie’s hand.

“Surly?” Junie whispered under her breath.

I HELP CINCH A thin tea-rose stretchy garment with a thousand mini eye hooks around Mama’s broad waist and the lower half of her body. A lit cigarette flaps between her lips as she grunts, pries, stretches, and pleads with the fabric. The veins in her neck stand guard. “Come on, Junie, now pull that other end!” Mama stands in front of her vanity, the room dismal. Me, on my knees, I fasten the first three eye hooks as Mama takes another inhalation and then quickly secure the other teethlike hooks in between. I feel hot ash land on my head. I brush it away without a word and stand up. I step back and look at Mama. It’s eating her. The skin around her waist is pulled in so tightly but I can’t stop my imagination from spinning. I picture the flesh folding over itself like an unplayed accordion. A squeezebox. I see all the air in Mama’s body vibrating, flying up into her throat and back down to her toes, her torso a concave hollow shell. Why would anyone want to suck the sound out of themselves like this?

In the kitchen, Junie found her mother bent at the fridge, its white light accentuating her newly found waistline.

“Mama? Are you singing tonight?”

Maddie slammed the fridge, cracked the cap off a bottle of lager with the opener and tossed both across the kitchen counter. “Girl, what do you think? I’m not headlining just yet.” Her gaze fell. “But it don’t matter. Once the crowd hears me, at all these spots, they’ll be signing me as regular, just you wait and see.” Maddie took a long sip from the bottle and Junie watched the lump in her throat jump up and down with each swallow.

“How was school? You get on okay? They ask you all kinds of questions?” Maddie took another sip, her eyes watchful.

Junie’s thoughts drifted to the girl with the gleaming tresses and the melted pig’s fat shoes. She thought her teach- er Miss Shirley was remarkable in how she paid attention to Junie. And the berry red of her lips. And how she seemed to slow down enough to notice things. She wasn’t distracted by the ins and out of the world around her, at least not while her students were present. “It was just fine, Mama. My teacher seems kind.”

Junie inched closer to her mother. “Mama, who’s the Empress of Blues? The Village is plastered with posters.”

Maddie took another sip. “Oh, look at you taking an interest in the entertainment world, eh? Girl, she’s one of the best singers out there. Better than me, dare I admit.” She took another swig. “Rumour has it she’s making her way to Vancouver sometime soon. I bet her and I will be fast friends, too!”

Maddie lifted the bottle to her lips again. “And let me tell you something. Music, now that’s where real living is done. Stories. I think about all the ways I choke down notes and throw them right back up, and white folks swallow ’em faster than their fish dinner. That’s what real music does. But I don’t sing for them. Best believe that, Junie. I don’t sing for them.”

Junie looked at her mother as her eyes seemed to shift in colour and size into slender curved moons, glinting. She lost herself in her own thoughts.

Maddie sparked back to life, cackled, and slapped her knee. “And those posters don’t do the music scene no justice. The feeling you get when you walk into one of these back-alley clubs as an entertainer, why it’s like you are one of the most important people in the world. Can’t capture that on no poster. Don’t pay for nothing while you’re on the clock, either. Everyone dressed in their finest. But never you mind. I gotta get going.”

Junie swallowed her excitement at the fact that her mother had answered her question. At that moment, she was a mother.

Chelene Knight is the author of the Braided Skin and the memoir Dear Current Occupant, winner of the 2018 Vancouver Book Award, and long-listed for the George Ryga Award for Social Awareness in Literature. Her essays have appeared in multiple Canadian and American literary journals, plus the Globe and Mail, the Walrus, and the Toronto Star. Her work is anthologized in Making Room, Love Me True, Sustenance, The Summer Book, and Black Writers Matter, winner of the 2020 Saskatchewan Book Award. Her poem, “Welwitschia” won the 2020 CV2 Editor's Choice award. She was shortlisted for PRISM's 2021 short forms contest. Chelene's novel Junie was published by Book*hug Press in 2022, and her book on Black self-love and joy is forthcoming with HarperCollins Canada in 2023.

Knight was the previous managing editor at Room magazine, and the previous festival director for the Growing Room Festival in Vancouver. She has also worked as a professor of poetry at the University of Toronto. Chelene is now founder of her own literary studio, Breathing Space Creative through which she’s launched The Forever Writers Club, a membership for writers focused on creative sustainability. Chelene works as a literary agent with the Transatlantic Agency.

A riveting exploration of the complexity within mother-daughter relationships and the dynamic vitality of Vancouver’s former Hogan’s Alley neighbourhood.

1930s, Hogan’s Alley—a thriving Black and immigrant community located in Vancouver’s East End. Junie is a creative, observant child who moves to the alley with her mother, Maddie: a jazz singer with a growing alcohol dependency. Junie quickly makes meaningful relationships with two mentors and a girl her own age, Estelle, whose resilient and entrepreneurial mother is grappling with white scrutiny and the fact that she never really wanted a child.

As Junie finds adulthood, exploring her artistic talents and burgeoning sexuality, her mother sinks further into the bottle while the thriving neighbourhood—once gushing with potential—begins to change. As her world opens, Junie intuits the opposite for the community she loves.

Told through the fascinating lens of a bright woman in an oft-disquieting world, this book is intimate and urgent—not just an unflinching look at the destruction of a vibrant community, but a celebration of the Black lives within.