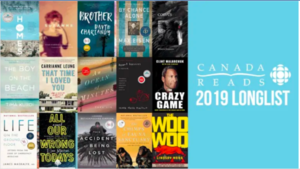 CBC Books has announced the Canada Reads longlist and the 2019 competition's theme: "One book to move you".

The 15-title list includes fiction and nonfiction, new titles and older ones, from authors across the country.

CBC's Ali Hassan, who proved a popular host in 2017 and 2018, will return for his third year hosting the book brawl. The five celebrity panellists, who will each pick and defend a title from the longlist, will be announced January 31.

Canada Reads is a televised debate where five panellists pick their favourite book from the longlist and attempt to convince one another their selection best fits the year's theme and criteria. Each day, one book is voted off by the panellists until a final winner is chosen on the fourth and last day of the debates.

On January 31, 2019 (7:00pm), the panellist announcement will be followed by an event in the Atrium of the Toronto Reference Library, with Ali Hassan chatting with the panellists as well as the shortlisted authors. The event is free and open to the public. Ticket information for the Canada Reads debates will be released on January 31 as well. The debates will take place from March 25 to 28, 2019 at CBC studios in Toronto.