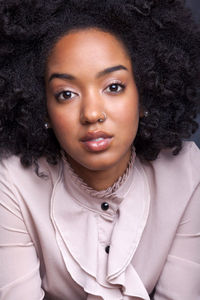 How do you change a society that seems stuck in its biases and ignorance? This is one of the urgent questions at the centre of CBC host Amanda Parris' powerful new play Other Side of the Game (Playwright Canada Press).

Other Side of the Game follows Black women working to make a difference, organizing in their communities, and fighting pervasive anti-Black racism with everything they've got.

Beverly, in the '70s, and Nicole, over 40 years later, are bonded by their determination and strength in the face of police discrimination, biased court and penal systems, and daily aggressions both subtle and overt. It's an insightful, thoughtful, absorbing look at the demands placed on Black women to be superhuman, to be perfect mothers, partners, and workers all while never tiring in the fight for their communities. Parris' voice is compelling and wise, crafting characters that will stay with readers and audiences for long after the last page or curtain call.

We're very excited to welcome Amanda to Open Book today to talk about Other Side of the Game. She tells us about her careful process in crafting dialogue to get her character's voices just right, sums up the character of Nicole in three pithy words, and tells us about her next project, which will see her transition to the screen.

Dialogue is one of my favourite parts of the writing process. I enjoy figuring out the rhythm and cadence of a character and how that shifts depending on the situation, their mood and their relationship with the other character they’re speaking to. Research is important not only for developing story but also for crafting authentic and grounded dialogue and that research can happen in a variety of ways. In crafting the dialogue for Nicole, I really wanted to make sure that she sounded like the women I grew up around. Nicole’s slang and style of speaking isn’t something that I’ve read in many novels or plays, but it does show up in certain Hip Hop songs, on social media and in the YouTube channels of local influencers. So alongside my own experiences, those were the spaces I perused for reminders and refreshers. I highly recommend reading dialogue aloud and making sure it flows well from your own tongue. Always keep in mind while writing dialogue: there are many things that make sense of the page but that doesn’t mean it will translate to the stage.

Nicole is: loyal, tired, and ambitious.

Pecola Breedlove is a character from Toni Morrison’s The Bluest Eye. Although this little girl is arguably the protagonist, she’s not necessarily a character who feels real in the sense of being a nuanced, complex and fleshed out human being. She feels real because she is a representation of so much pain and trauma that has been carried by Black folks for generations. Pecola Breedlove is a character who has haunted my imagination and my heart for years.  I think of her, I dream of her and I’ve also cried for her many, many times.

This is going to sound a little ridiculous but Jessica and Elizabeth Wakefield from the Sweet Valley High book series are characters I think about all the time. It’s embarrassing but true. I devoured those books when I was in elementary and middle school and for better or worse they shaped so much of my expectation for what high school and my teen years were supposed to be. The identical twins with the blonde hair and blue eyes (I think they were always described as “strawberry blonde with aquamarine eyes”), one superficial and fun loving, the other serious and ambitious, represented the personality traits and beauty ideals I thought I needed to grow into. These books also made me believe I’d be driving a convertible at 16, but that definitely didn’t happen.

I’ve learned a lot since I wrote my first play (which will never see the light of day again!) and there are a lot of things that I would change about it in terms of story and structure. However the characters are one element that I remain proud of. Although they weren’t as fleshed out as I would require from work that I create now and could probably benefit from more clarified motivations, each character had a strong point of view, distinctive qualities and individualized styles of speech. I think of them fondly from time to time.

I wrote a short film over the winter called The Death Doula and I’m producing it this summer. It was a really fascinating experience writing a screenplay and I thoroughly enjoyed it. There are a lot of pieces to maneuver as I get it ready for production, but I’m really excited about manifesting my writing for the screen.

By day, Amanda Parris is a television and radio host and writes a weekly column. By night, she writes stories for the stage and screen. Other Side of the Game is her first published play. In Amanda’s past lives she was an educator who wrote arts-based curricula, attended numerous acting auditions and dreamed of opening a school that Blue Ivy Carter would attend. Over the course of her career, Amanda has worn a variety of hats, working as an educator, a researcher, an actor and a community organizer. She is the co-founder of the award-winning alternative education organization Lost Lyrics and worked with the Remix Project and the Manifesto Festival. She has spoken about her work at United Nations conferences around the world. Parris completed her Honours B.A. degree in Political Science and Women’s Studies at York University and her M.A. degree in Sociology of Education at the University of Toronto. She was a playwright-in-residence at Cahoots Theatre Company and Alameda Theatre Company and studied writing and acting at b current performing arts, anitafrika dub theatre and the Lee Strasberg Theatre & Film Institute.

Other Side of the Game

I don’t think you can expect society to change if you’re not ready to take the first step.

In the 1970s Beverly walks into an office of Black activists, wanting to join the Movement, and has to prove she’s angry enough to fight. Some forty years later, in the Hip Hop Generation, Nicole reunites with her ex-boyfriend on a basketball court, wondering where he’s been, when a police officer stops them.

In this striking debut, Amanda Parris turns the spotlight on the Black women who organize communities, support their incarcerated loved ones, and battle institutions, living each day by a ride-or-die philosophy, strengthening their voices and demanding to be heard.