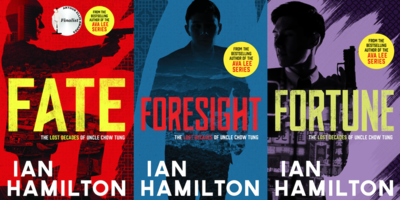 Inspired by the love pouring in for Uncle from Ava Lee readers, Hamilton gave Uncle his own series, digging into his backstory that starts in the early 1970s, in China's ruthless underground gangs.

The Lost Decades of Uncle Chow Tung series contains three books so far and House of Anansi Press is generously giving away a prize pack with all three titles (including the brand new instalment, Fortune) to one lucky winner. Get your dose of gangs, corruption, and power-chasing with this addictive series from one of Canada's top page-turning writers.

The Ian Hamilton Uncle Series Prize Pack contains one copy of each of:

To enter, just send us an email at contests@open-book.ca with your full mailing address and the subject line "Uncle series contest". To be considered, your entry must be sent by 11:59pm on Sunday, January 17, 2021. One entry per person. This contest is open only to Canadian residents. One winner will be selected at random and notified by email after the contest's closing.

Good luck to all who enter!