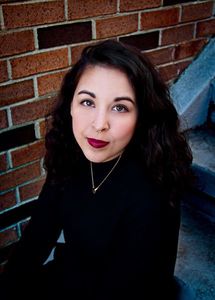 Mallory Tater's debut collection of poetry This Will be Good (Book*hug) delves into the push and pull between the feminine body and disordered eating - not only the tension and pain of that experience, but the effect it has on relationships of all kinds.

By interrogating the performative and sometimes punishing aspects of gender and femininity, the poems in the collection reveal the body and its pressures as a complex battleground for identity.

Dina Del Bucchia praised the collection, saying "This Will Be Good details the truths of girlhood."

We're excited to have Mallory, whose poems and fiction have racked up numerous honours, including prize nominations from Room Magazine, The Malahat Review, and Arc Magazine, on Open Book today.

She responds to our Poets in Profile series, telling us how poetry helped her on a healing journey, sharing the great file name where she keeps poems that didn't quite work, and describing her (and her partner's) fascinating theory about how poems end.

When I was growing up, I loved to share stories. I’d fill notebooks with ideas and I’d also make up stories to tell my little sisters before bed. I pursued this creativity in a mostly prosaic way until around my undergrad degree. At the University of Victoria, Dionne Brand visited and read from her collection Ossuaries. The book’s narrative grasp, pulsating language and incredible imagery made me want to read more poetry and write more poetry.

I never thought I’d write so many poems that pay attention to the body, particularly my own body. I was always self-conscious and really loathed the feeling of being in my body. Healing these unhealthy thoughts through poetry brought me closer to my body. I find our writing about bodies, both physical and emotional, so moving in ways I never thought I would when I was sick with anorexia, feeling insecure and objectified under a patriarchal lens following puberty. Embracing my body and the idea of space and ownership, comfort, became a very unlikely source of inspiration for my writing and I am very grateful it did.

I write poems individually but if there’s a theme, person or image that keeps coming to mind, I will dedicate several poems to that certain obsession. I like poetry collections that stretch over more than one theme or narrative and I do strive to accomplish this by not thinking of the whole initially, but various parts that will eventually create a succinct, compelling whole.

I place it in a file on my computer I call “Almost” instead of deleting anything because maybe an image or line or sentiment still rests in that ‘failed’ poem. Poems may not always work at first but they don’t expire like milk. I return to the “Almost” file when I need inspiration. I borrow images or elements from unused poems. They’re like bits of scrap paper.

The way it ends. My partner who is a terrific poet, Curtis LeBlanc, and I created a theory we think about often for poetic endings—they either land or take off. The ‘landing’ effect means the poem settles toward a concrete point—rhythmically, thematically—the poem kind of find itself home or at some point of return in relation to the introduction. If the poem ‘takes off’ at the end, it deviates from previous themes, attempts to speak of something new or leaves the reader with an abstraction, new thought or a journey that the writer could continue on consciously or subconsciously in other poems. I’m always really excited when I write a poem to re-read it and find out if my ending ‘landed’ or ‘took off.’

Mallory Tater is a writer from the traditional, unceded territories of the Algonquin Anishnaabeg Nation (Ottawa). Mallory’s poetry and fiction have been published in literary magazines across Canada such as Room Magazine, CV2, The Malahat Review, The Fiddlehead, The New Quarterly, Carousel, Prism International and Arc Magazine. She was shortlisted for Arc Magazine’s 2015 Poem of The Year Contest, The Malahat Review’s 2016 Far Horizon’s Contest and Room Magazine‘s 2016 Fiction and Poetry Prizes. She was the recipient of CV2’s 2016 Young Buck Poetry Prize. She is the Publisher of Rahila’s Ghost Press, a poetry chapbook press. She lives in Vancouver.

This Will Be Good

Mallory Tater’s This Will Be Good tells the story of a young woman’s burgeoning femininity as it brushes up against an emerging eating disorder. As the difficulties of her disease reveal themselves, they ultimately disrupt family relationships and friendships.

These poems deftly bear witness to the performance of femininity and gender construction to reveal the shrinking mind and body of a girl trying to find her place in the world, and whose overflowing adolescent hope for a future will not subside.