We're counting down to the holidays the best way we know how - by gifting excerpts from fabulous books! Today is our final instalment for our December spotlight on excerpts and we're finishing with the incredible Alex Leslie's We All Need to Eat (Book*hug).

The linked short stories follow Soma, a young Queer woman living in Vancouver. Each story captures a turning point in her life and the quest for nourishment, whether spiritual, physical, or emotional. Timely, powerful, and expertly crafted, the stories weave the moments of a heartbreaking and relatable life into an unforgettable narrative.

"The Sandwich Artist", an excerpt from We All Need to Eat by Alex Leslie: 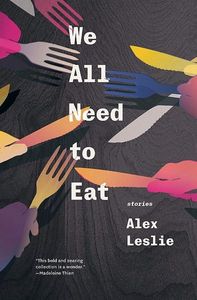 Forget everything you’ve heard about latchkey kids. I loved the freedom. The unclocked arrivals, my backpack’s contents spread out across the three couches, the TV guiding me into the trashiest dead ends of adulthood. I microwaved bags of frozen gyoza, dressed them in Kikkoman teriyaki sauce and honey, and watched drag queens claw each other’s gender identities on Montel, watched Judge Judy preside over trailer-park divorces, watched Maury Povich call paternity test results like a hockey referee bracing for a fistfight. Hustlers and salesmen populated my afternoons while I spooned up Bear Claw ice cream, sucking frozen marshmallow bulges from my spoon while middle-aged women bemoaned their sex drives. It doesn’t even work in the bathtub anymore.

But my favourite show was Boot Camp. Obese teenagers with multiple misdemeanours scoured toilets with toothbrushes and did push-ups while men in security uniforms bellowed down at the folding adolescent bodies. Sally Jessy Raphael, my favourite TV personality for her inexplicable cruelty and rhinestoned disdain, presided. In my memory she’s a redhead in a white suit with a gaudy red collar. Cruelly cut rhinestones. The teenagers sob, then are blessed by her hand. She absolves us, her watchful monsters. I watched, inhaling my Ichiban instant noodles with an egg swirled in, my hot chocolate bloated with marshmallows, Kraft Dinner with butter and instant milk crystals sprinkled on like Pop Rocks. I felt sorry for the kids on the screen, my fellow prisoners who’d somehow had the bad luck of getting caught. But I disapproved of their weakness, looked down on them for losing it on camera. How they sobbed and pleaded for release—I will get better, I will be better. I watched, the judicious observer, stuffing myselflike a beast being prepared for her roasting day. My hunger was insatiable.

After my mother left, my father put Josiah in after-school care; he never asked me if I would prefer to go too. I was a small adult from now here on in—our secret bargain. Until my father brought Josiah home on his way back after his work commute, at sevenish, I was alone. Those hours, after Rosie O’Donnell and Montel and Judge Judy, were when I learned to cook. My father started giving me weekly cash in envelopes. I pushed the shopping cart from the store. Five blocks to our house, neighbours accustomed to my routine, the clatter of the cart on the dimpled sidewalk. I white-knuckled it, always afraid that someone would pursue me from the store for taking the cart. Nobody ever did. My fear placed its wide hands on my shoulders and pushed me forward. But who’s going to chase a ten- or eleven-year
old pushing a cart full of chicken breasts, garlic and spaghetti? I ferried my ingredients up the hill.

I loved frying the most—sautéeing, the cookbooks I started to check out of the library taught me. A new vocabulary of taste and heat.

I was twelve, thirteen, fourteen; I melted olive oil and butter together, swivelled the pan until they rose in a brown lather, lay the chicken breasts skin-down, inhaled the crackle. I seasoned my meat well. When they got home, it was always seasoned and ready. My father catches me at the front door before I can head to Josiah’s room.

“Josiah’s tired. So maybe we’ll just cook for a while, till he has time to come around.”

I hear the dim snarl of Josiah’s electronica from his room at the back of the house. He’s almost twenty, not a baby anymore, but he’s our baby.

My father studies my face. He’s going to tell me what’s going on with Josiah. Why he won’t return my calls, my emails, Facebook posts that linger on his wall. “Soma,” he says. “I remembered to leave the chicken out to let it come to room temperature. Like you said.”

“Did you dry it before you oiled it?” I ask.

“Yep.” If I haven’t been able to make my family happy, I’ve at least taught them something about how to eat.

We set to work on the chicken. He hasn’t preheated the oven. “I forgot what temperature,” he complains, “because you never write anything down.”

I oil the skin, drop the neck in a saucepan of water to simmer for the jus, plunge my hand wrist-deep into the bird, fill it with lemons and garlic and a small hoop of rosemary. Cold in there, small ribbed cave. I pull and seal the skin over the hole. I snow the bird with salt. Always hold your hand at a height, so the salt distributes evenly.

He slides the chicken into the oven. The door shuts gently. He bought a new fridge and stove last year. The springs are still eager, jump shut. The stove he threw out was the stove of my childhood education, those adolescent banquets prepared in afternoon isolation. The light in the oven was shot for half a decade. Two of the burners were crooked from use—my hands and wrists developed to rotate the slanted pans so the meat cooked evenly. He didn’t tell me when he threw out the old stove—I arrived one day to the new one, its face gleaming mutely. It felt like my first car had been stolen. I didn’t know that I had loved it, the chipped silver-faced dials and the top encrusted with a generation of spitting pots and my father’s granulated garlic, my first serious burn inflicted by steam, not sunlight. How years of family flavour become paint.

He flips the oven light on and we kneel side by side, stare in at the bird, pale and naked above the glowing bars.

“Glad you’re here,” he says, puts an arm across my shoulders. Josiah has locked his bedroom door. I pound on it, a Sally Jessy Raphael warden all over again.

“What the fuck. I can’t believe you. I came here to see you.”

I haven’t come in a month from my bachelor apartment on the other side of the city—I’ve been swamped in shifts at the restaurant where I worked as a line cook, the most recent in my string of shitty jobs. Josiah works out of his bedroom, programming online games that people buy from a friend’s site. He has online friends he’s worked with for years who he’s never met; last year he drove across the border to meet a few of them for burgers and nobody got along in person, so they went back to being techie internet soulmates. He emailed me the master password a year ago and I trolled his games, searching for a way into him. A world of elves, trolls, and fairies. Rapunzel-like plots. Rescues and escapes. I surfed through, knowing he would look up my catalogue of movements indexed to the username. The next time I saw him he was eager and bashful. “I liked it,” I told him. “A lot of the games seemed to be about love.” He shrugged, gave me a disappointed look. “All games are about love,” he said.

I pound the door again.

His voice thuds through the hollow-core wood. “Go. The. Fuck. Away. Now.”

Cranks his music up, a remix of songs I don’t know.

He’s the person I have most memories of feeding. His birthday cakes, his favourite potatoes, the instant Farkay brand Chinese noodles I tossed in smooth peanut butter and honey for him until his voice broke and his legs swept out from under him, the slender trunks of poplars. He was so eager, so easy to fill.

We were never siblings who gave gifts. People mistook our silence for distance. Friends didn’t mention our absent mother—thought it taboo or rude. But I was frequently told by other people’s mothers, to compensate, You’re lucky to have such a great dad. As if one thing can replace another. Josiah and I knew better, and because we always already knew, we didn’t need to say it.

Nobody had spoon-fed us. We were greedy but self sufficient. Hard with want. When I was about fourteen, my father started going away on business trips for two days, three days. Longer and longer. Another kid’s mother dropped Josiah off from his after-school daycare. I bought us Ruffles, Cheezies, cheddar Bavarian smokies, bacon, tubs of frozen cookie dough that we ate raw with spoons from the bucket. Food we never ate in front of other people’s mothers. I rented the old Disney family movies. Candleshoe, Escape to Witch Mountain. Boxes of frozen mini sausage rolls. We were a trashy cocktail party. Mini quiches. Rootbeer floats clanked together. We slept on the thick dirty carpet in front of the TV. Bellies painfully hard, pressed together. Conspiracies of sugar and loneliness. We ate and we ate and we ate and we ate and it was never enough.

For more information on We All Need to Eat by Alex Leslie, click here.

We All Need to Eat

We All Need to Eat is a collection of linked stories from award-winning author Alex Leslie that revolves around Soma, a young Queer woman in Vancouver. Through thoughtful and probing narratives, each story chronicles a sea change in Soma’s life. Lyrical, gritty, and atmospheric, Soma’s stories refuse to shy away from the contradictions inherent to human experience, exploring one young person’s journey through mourning, escapism, and the search for nourishment.

The stories slipstream through Soma’s first three decades, surfacing at moments of knowing and intensity. The far-reaching impact and lasting reverberations of Soma’s family’s experience of the Holocaust scrapes up against the rise of Alt Right media. While going through a break-up in her thirties, Soma becomes addicted to weightlifting and navigates public mourning on Facebook. As a child, Soma struggles to cope with her mother’s sorrow by becoming fixated on buying her a lamp for seasonal affective disorder. A friend’s suicide prompts a drinking game that takes mortality as its premise. But alongside the loss in Soma’s life is a pursuit of intimacy, resounding in the final story’s closing words: “Look me in the eye.”