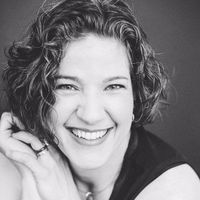 In Nightwatch: The Vet Suite (Invisible Publishing), acclaimed poet and novelist Gillian Wigmore takes readers into the unique lives of rural veterinarians. Wigmore comes by the incredibly in-depth knowledge on display in the three linked novellas honestly—as the daughter of a vet, she grew up surrounded by the kinds of situations her characters encounter.

Caring for animals in circumstances that are by turns strange, funny, and downright terrifying, the vets in Nightwatch experience a microcosm of human emotion played through their trusting (or ornery, or playful) charges. The structure of the three novellas provides a unique point of interest and lets Wigmore stretch her considerable literary talent, packing triple layers of depth, humour, and insight into the three complimentary tales.

The stories are filled with moments of unexpected grace, heartbreak, and connection and move readers from rural landscapes of small town BC to locations in the South of France and Fiji, spinning a narrative about the universality of the way humans love—and connect with—animals in their care.

We're proud to present an exclusive excerpt from Nightwatch here today, courtesy of Invisible Publishing, featuring an intense scene of a pregnant cow in crisis leading the narrator to delve into her own family history. 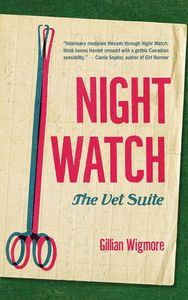 Inside, the barn was lit with a bare bulb screwed into an extension cord, strung over the rafters to illuminate a wide aisle flanked by dark stalls. The light left deep shadows on all it didn’t touch and the hay was old and trampled, dirty with manure and use. A cow lay heaving in the centre of the aisle, tied by a halter to a beam. Her neck stretched awkwardly toward the wall. Her wet, shallow breathing was the only noise in the barn. I stopped when I saw her. Nausea washed through my guts. I set the bucket and jugs down, stepped into the shadows and turned away.

A farmer walked toward us from the other end of the barn. “Hey Doc,” he said. “And hello, there,” he called to me. “Glad you could make it. Sorry about the bad timing.”

“Maybe you can tell me. She’s been breathing like that for hours. We got her tied up there and we tried to figure out what that calf ’s doing, but we can’t tell. I reached in and felt something. A nose, I think. Feels big, anyway.”

Dustin set his case down by the wall and walked toward the cow. The blue collar of his vest stuck up from inside his dust-coloured coverall. I watched him lay his hand on the cow’s flank and run it up her side, and I heard him start, low and mumbling, to talk to the cow, just like we’d always heard Dad do it. “There’s a girl. That’s right, it’s just me. There we go, there we go. Not so bad, is it? Not so bad.” I’d seen it calm cows before, a million times I’d seen it and heard it, but I’d never noticed its effect on me. I felt my chest unclench. I fought to keep in mind it was Dustin and not Dad talking, and the talking shouldn’t work because Dustin was Dustin, but it worked, and I calmed. I felt my breathing slow and my hands relax.

The cow, who had calmed as well, suddenly flinched and breathed harder, a contraction bunching up her hind end in spasm toward her front. Her eyes rolled white in her head.

Her legs stuck straight out stiff and then sagged, her breath rasping. Dustin’s hand was still on her stomach. “She been labouring long?”

“A few hours, like I said. She lay down about an hour ago.” The farmer stepped forward into the light with Dustin. The cow relaxed against the halter and blinked and breathed. The farmer put his hand on her neck where it bent funny and stroked the red fur.

“This is her first time, right?” Dustin had his stethoscope out and listened to the cow’s distended abdomen, then placed it on her back, listening to her heart.

“That’s right. She’s a good-natured sort, but she’s having a tough time with it.”

I watched the men’s hands on the cow and the cow resting between contractions. I knew the smooth, warm plastic of the stethoscope and the cool of its flat face from being allowed to hold it while Dad worked. It could have been a new one—it could have been Dustin’s stethoscope from vet school—but it looked like Dad’s. I knew how the stubby plugs felt in Dustin’s ears because I’d felt them before, straining to hear over my own breathing, trying to keep my brother still while I sat on him, squashing him down to listen to his little beating bird heart when we were kids. I stood behind a stall wall and looked into the bright aisle. The wind blew between the cracks in the walls of the barn behind me. I pressed myself up against the wood and watched the heifer bunch and seize again, the contraction pulling her muscles taut. I saw my brother’s hands stroke the fur on the cow’s broad forehead. I saw the blank whites of her eyes.

“Nope, just a big old nose. You want me to help you get her up?”

“Come on, girl, up you get.” He whacked the heifer on the back near her tail. She startled, but didn’t rise. “Come on, now.” He grabbed her tail and bent it in half and whacked the cow again. She startled and lowed and struggled to get her legs under her. Dustin got his arms beneath her back and he and the farmer heaved her up. She stood splaylegged and wobbly under the light, the halter holding her head down, now at a different angle. The farmer patted her and came close against her side, there if she started to fall.

“Thanks. Now let’s see what we can do.” Dustin walked over to his bucket and jugs of water where I’d dropped them at the barn entrance. He slopped enough water into the bucket to wash his hands and arms, then he picked up his brush and bucket and took them back to the cow. He scooped water on her vulva and washed it with his hand. He tried to lighten the mood. “There must be divine logic in the placement of the arsehole over the vagina, but I can’t figure it.”

I winced. We weren’t religious, but ninety-five percent of the town of McCall were. Was it risky for him to say that? I watched the farmer’s face, but he only smiled. We watched Dustin scrub the cow and walk away dripping from elbow to fingertip.

He looked like Dad in this light, or this circumstance. Maybe it was his gait. He was broader in the shoulders, shorter, so he didn’t stoop as much as Dad, but his forehead was the same, and the way he pushed his glasses up his nose. Even his hair—short on the sides, the little bit left on top combed over to the right—just like Dad’s.

Dustin opened his black case and stepped out the trays that accordioned from the box. He squirted lubricant all over his right hand and arm, then walked to the cow’s hind end. “The lubricant will help her clean any poop out of there. It’ll help me get in and the calf get out without hurting her.” He said this to himself as much as to the farmer, I knew. I recognized Dad’s teaching voice—low and slow, and a little apologetic. He turned his attention back to the cow. “There’s a girl, that’s right, don’t worry about me.” He slid his hand into the swollen vulva, pushing as far into the vaginal canal as he could. He made a face. “You sure you felt a nose, there?”

The cow had blinked when he slid his arm in, then she strained against him. He winced and stood still as she contracted on the calf and his arm. He pushed farther into her. “Relax, girl, relax.” The cow’s breathing was loud and she lowed as Dustin probed her insides.

The barn creaked and moaned in the wind. I knew this part of the farm call well: the figuring and finding out, the examination and questions, but I also recognized the audacity—if that was the word—of the men. I’d always felt the cow’s part, the indignity of needing help, and I knew the potential for everything to go wrong in an instant, so the necessity of the intervention, but I also recognized the matter-of-fact invasion of the cow’s body. Like growing up a girl. Maybe that was what I meant by audacity—maybe I meant passivity when forced face-to-face with science, the lie-back-and-let-it-happen of the Pap-smear or the breast exam. It was complicated. There was the cow, the pregnancy, the misfortune of a too-big calf or a placenta previa, or prolapse, or whatever, and then there was the way doctors solved those problems.

Dad had gone into these nights with gentleness, and Dustin did, too, but the boldness of their interference was something I couldn’t get over. My own Caesarean was ever-present, even though it happened ages ago. The way my body lurched from side to side behind the blue curtain, hiding my open abdomen from me, what I’d felt despite the epidural, when they’d hauled Jonas, and then Sean, out of me. I was helpless—insensate, but also helpless to the events—and in order to survive I’d had to submit to such gross and base proceedings. I leaned against the rough boards of the enclosure and sweated in my coat, the backs of my legs freezing.

Dustin slid his arm out of the cow, bringing forth a gush of red fluid that splattered over his boots onto the hay. The barn shifted in the wind gusts and snow drifted in across the floor.

A library branch manager and the daughter of a veterinarian, Gillian Wigmore has published three books of poems: soft geography, winner of the ReLit Award; Dirt of Ages, shortlisted for the George Ryga Award; and Orient. In addition to Night Watch, she has written a novella, Grayling, and Glory, a novel. She lives in Prince George, BC.

Three poetic novellas centred around the author’s background of growing up as the child of a veterinarian.

Full of humour and compassion, Night Watch collects three novellas that explore the lives of rural veterinarians. Wigmore’s vets struggle to stay awake during unending calving seasons, reaching for moments of stillness and grace between phone calls and farm calls; they balance their own family’s births and deaths with shepherding animals through caesareans and euthanasia, covering miles of road in their vast jurisdictions during harsh winters and muddy, ruthless springs. Travelling from small towns in northern BC to the south of France and Fiji, sometimes in the span of a night and sometimes over a lifetime, the men and women in Night Watch work with their hands, keep their hearts in check, and strain to define themselves against the backdrop of an unforgiving job that puts them at the mercy of the elements—and each other.