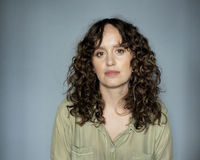 What's more relatable than griping about the repetitive and dull nature of a bad job? Except for the nameless characters in Olga Ravn's Booker nominated The Employees (Book*hug Press, translated by Martin Aitken), the jobs are as a crew members on a deep space ship, hundreds of years in the future.

The darkly funny tale, told in a series of reports and memos, follows crew members both human and humanoid, as they complain about the daily grind aboard the Six-Thousand Ship. Everything changes though when the ship takes on board artifacts from a planet called New Discovery. The objects become obsessions for the crew members, who fixate on the ideas of love, home, and family—things left far behind on Earth—that the objects represent.

By turns witty and dark, distant and intimate, The Employees is a totally original creation, from one of Denmark’s literary superstars. Thanks to acclaimed translator Martin Aitken, English speakers can read this stunning novel, which we are proud to share an excerpt of today, courtesy of Book*hug Press.

Here we meet numerous human and humanoid employees sharing their thoughts on the day's work. What at first seems straight forward takes on a haunting quality, as Ravn performs a kind of emotional subterfuge, finding the grief at the centre of each character's existence without ever straying from a believable and at times deceptively bland recitation of fact. This sleight of hand, both literary and emotional, that she performs in each short memo makes each one its own tiny, heart-wrenching universe.

Excerpt from Olga Ravn's The Employees, Translated by Martin Aitken: 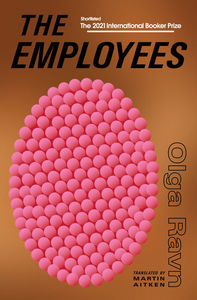 I’ve never not been employed. I was made for work. I never had a childhood either, though I’ve tried to imagine one. My human co-worker sometimes talks about not wanting to work, and then he’ll say something quite odd and rather silly. What is it he says now? There’s more to a person than the work they do, or A person is more than just their work? Something like that. But what else could a person be? Where would your food come from? Who would keep you company? How would you get by without work and without your co-workers? Would you be left standing in a cupboard? I like him, this human co-worker of mine, his interface is impressive. I’m stronger than him, and have more endurance, but sometimes he’ll get an idea that means we can do our job in less than the designated time. He’s got an incredible knack for streamlining, from which I gladly learn. I’ve become a lot better myself at seeing how a workflow can be adjusted so that the task at hand can be completed more efficiently. This has surprised me rather a lot, because I’ve never known such improvements in my performance without an update being involved. Whenever we save time, I’m ready to move on to the next task straight away, but my co-worker always says, Now let’s sit for a bit. I’m not sure what he means by this, but I sit down with him all the same, sensing that I might offend him otherwise and jeopardize our excellent working relationship. Perhaps it’s an old custom from before my time? It’s not possible for me to continue our work on my own, so I hope you’ll be kind enough to overlook the matter, and anyway, it’s only about fifteen minutes a day at the most that we sit for a bit. He tells me about the bridge and the woods near his childhood home, about the stream that flowed under the bridge, how they used to swim there, and a lot of other things from the place he calls Earth. He’s shown me a stream that runs down in the valley. Obviously I can’t leave the ship, but he’s pointed it out to me from the panorama room. The stream glitters, and it runs like a silvery thought through the landscape. He put his hand on my shoulder. It was warm. A human hand. He said: “You’ve lots to learn, my boy.” An odd thing to say, seeing as how I was made a man from the start.

The first smell that disappeared was the smell of outside, of the weather, you could say. Of fresh air. Now that I’ve acquired some small knowledge of it, I can say: the smell of gravity. The last smell that disappeared was the smell of vanilla. That, and the fragrance of my child when I would bend over the baby carriage to pick him up. What I smell now are the rooms, and I dream that their walls are covered with great sheaves of hay and dried herbs, and that from these sheaves chains dangle with little pomanders of silver filigree, and the pomanders contain eyes, and the smell in the rooms comes from the sheaves and eyes together. And in the dreams, twigs and branches appear from out of the sheaves, as if they were alive, and we try to escape them, but they come crawling out after us from under the door and cause us to faint. When I’m in the rooms, it feels as if the objects know about these dreams, and I become embarrassed.

My work here is mainly of an administrative nature. Yes, that’s correct. I allocate the day’s tasks. It’s also my responsibility to make sure the human section of the crew doesn’t buckle under to nostalgia and become catatonic. We saw a lot of that to begin with. To everyone’s surprise, the objects in the rooms have been shown to alleviate the discomfort of these nostalgia attacks, and the human employees whose functions allow them to get out into the valley on New Discovery quickly show signs of improvement and lifted spirits.  My own favourite is the big one with the deep yellow grooves. When the sun hits the object, the grooves glow and a resin-like substance oozes from them. Since there are no windows in the room where we keep them, we sometimes bring this object up into the panorama room. When our orbit around New Discovery brings us into the right position, the sun strikes the panorama room, filling it with warm and shimmering light, like luminous water. The big object then radiates from its place in the middle of the room. The fragrant liquid flows from every groove. Anyone present in the room at this point will be filled with a happiness I can’t describe in words. When the ship continues its course and exits the light of the star, the big object emits a sigh, as if fatigued. We wipe it clean with moist cloths and carry it back to its room. It appears fatigued in our arms. I’ve granted the crew permission to keep these cloths, which I know they like to place over their faces when going to sleep. I lie with one myself in the same way, and it helps me, even if I can’t explain how.

I work closely with Cadet 08 and have got to know her quite well. Unlike me, she was born out of a human body and has walked on the planet, and when we talk she nearly always tells me she misses Earth. She’s not proud of the fact, because she does want to be a good employee, I assure you. In the same place that she feels this longing for Earth inside her, I feel a similar longing to be human, as if somehow I used to be but then lost the ability. I know I’m only humanoid and that it’s not the same. But I look like a human, and feel the way humans do. I consist of the same parts. Perhaps all that’s needed is for you to change my status in your documents? Is it a question of name? Could I be a human if you called me one?

The thing that’s made the biggest difference for my work is without doubt being allocated half an hour with a child hologram of my son before lights out in Wing 08. I watch him play with plasticine, and sometimes I just like to watch him sleep. Other times I let him cry, and I put my arms around myself and pretend I’m holding and comforting him. As you predicted, it was hard for me to look at the child hologram initially, and I would miss him even more when I did. But now, after a while, I can say it’s unburdened me and that the child hologram has now without a doubt helped stabilize me as an employee here, and I can see that it’s been beneficial to my work effort.

Every day I check the suits for tears and holes, a seam that might be coming apart or a stud that’s been lost. It’s not just an item of clothing, but a capsule too, that protects not only whoever’s wearing it, but also co-workers who enter the wearer’s intimate sphere. Once I’ve inspected the existing suits for wear and tear, I start constructing the next one.

Excerpt from The Employees by Olga Ravn (translated by Martin Aitken), a novel published by Book*Hug Press. Copyright 2022, Olga Ravn. Reprinted with permission.

Olga Ravn is one of Denmark’s most celebrated contemporary authors. Her work combines several genres, often crossing over into visual arts. Her debut poetry collection, I Devour Myself Like Heather, was published to critical acclaim in 2012. Alongside Johanne Lykke Holm, Ravn ran the feminist performance group and writing school Hekseskolen from 2015 to 2019. She has also worked as a critic, teacher, and translator. In collaboration with Danish publisher Gyldendal, she edited a selection of Tove Ditlevsen’s texts and books that relaunched Ditlevsen’s readership worldwide. The Employees, translated into English by award-winning translator Martin Aitken, was a finalist for the 2021 International Booker Prize. Ravn lives in Copenhagen.

Martin Aitken has translated the work of contemporary Scandinavian writers such as Karl Ove Knausgaard, Peter Høeg, Ida Jessen, and Kim Leine. He was a finalist at the U.S. National Book Awards 2018 and received the PEN America Translation Prize 2019 for his translation of Hanne Ørstavik’s Love. His translation of Olga Ravn’s The Employees was shortlisted for the 2021 International Booker Prize. Aitken lives in Denmark.

Shortlisted for the 2021 International Booker Prize, The Employees reshuffles a sci-fi voyage into a riotously original existential nightmare.

Funny and doom-drenched, The Employees chronicles the fate of the Six-Thousand Ship. The human and humanoid crew members alike complain about their daily tasks in a series of staff reports and memos. When the ship takes on a number of strange objects from the planet New Discovery, the crew becomes strangely and deeply attached to them, and start aching for the same things—warmth and intimacy, loved ones who have passed, shopping and child-rearing, and far-away Earth, which now only persists in memory—even as tensions boil toward mutiny, especially among the humanoids.

Olga Ravn’s prose is chilling, crackling, exhilarating, and foreboding. The Employees probes into what makes us human, while delivering a hilariously stinging critique of life governed by the logic of productivity.