The story of Baba Yaga, the forest-dwelling witch who grinds bones in her chicken-legged house, is one of the most enduring, strange, and iconic images from world folklore, and that's saying a lot. So it no surprise that Kat Sandler, the artistic director of Toronto's Theatre Brouhaha, who has proven herself to be one of the most exciting playwrights working now, would be drawn to the timeless witch's enduring appeal.

Sandler is consistently witty, unflinching, dark, and (in the best way) strange in her plays, and Yaga (forthcoming from Playwrights Canada Press) is one of her most compelling pieces yet. Translated to the modern day, Yaga follows a detective to a small, isolated town where he is investigating the disappearance of the heir to a yoghurt empire (yes, you read that correctly).

He meets a mysterious a university professor with a taste for younger men, as well as a lot of interesting and suspicious characters, giving the Baba Yaga myth a murder mystery twist that makes for great comedy and spectacular storytelling. Nominated for the Dora Mavor Moore Award for Outstanding New Play (an award Sandler has already won once and been nominated for another, separate time), Yaga is a delicious retelling that empowers the female character at the centre of the story.

We're proud to present an excerpt from the play here today courtesy of Playwrights Canada Press.

Excerpt from Yaga by Kat Sandler: 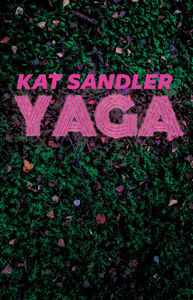 Rapp: Your office is very fucking cool. This is a fucking cool... skeleton thingie... Was it like a / bird or...

Rapp goes over and pokes at a fucking cool skeleton thingie.

Kath: You seem a little young to be a detective.

Rapp: (takes a sip of coffee) Oh, blech. Oh, fuck me. Oh, this is your coffee! You must have mine. You wanna trade?

Rapp: Come on. I just took one sip! What—you afraid I got cooties?

Rapp: You can’t just go around asking people how old they are—how old are you?

Rapp: Well you don’t look a day over fifty.

Kath: Well, thank you very much. I looked great at fifty.

Rapp: You look great now, and it’s, Detective Rapp... “How old are you, Detective Rapp.” Like you didn’t go through, what, a decade of training to be called Mrs. Yazov, right?

Kath: Someone has to die for me to be unmarried?

Kath: Yeah. Please call me Katherine. Everyone does, even my students.

Rapp: Got it, but I’m gonna call you Dr. Katherine then, you know, because we go through all this training to be official, right, to get like, your doctor badge?

Kath: We don’t get badges.

Rapp: But wouldn’t that be funny, if a doctor had to like, show you his badge—just a second, Ma’am, let me just find my doctor badge, ah shit! Where’d I put that fucking thing? (as nurse) Doctor, doctor, he’s bleeding out! Beeeepppp.

Kath: I’m not that kind of doctor.

Rapp: Right, you’re an academic doctor. You must be very smart.

Kath: No, bones. And zoology is the other one—I believe you just observed a lecture of mine.

Rapp: Hey, you saw me? I didn’t just look like a student, on account of my youthful demeanour?

Kath: I notice a new face.

Rapp: You must be very observant.

Kath: Yes, I am. Sorry, am I being interrogated?

Rapp: No, no, I just have a few questions about a student, are you single?

Kath: That’s relevant to your investigation?

Kath: I’m sorry, how old are you, Detective?

Rapp: You have a kid!

Kath: Yes, I’m very progressive, unmarried with a child, can you just ask me questions like this?

Rapp: We’re just chatting. Sparring. You don’t like sparring with me?

Rapp: That’s not a real word.

Rapp: Sounds made up.

Rapp: You’re fucking with me.

Rapp: Are you flirting with me?

Rapp: Did you want some harder questions?

Rapp: How old are you really?

Rapp: You don’t look a day over fifty-five.

Rapp: What’s your stance on abortion?

Rapp: Do you know any Henrys?

Kath: Well, I know he’s missing—it’s all over the school. Are you only just talking to people now?

Rapp: No, I’m only just talking to you now.

Kath: Well he’s not my student —

Rapp: That’s not what I asked—

Kath: You think something happened to him?

Kath: Well, what can I do to help?

Rapp: How well would you say you know him?

Rapp: (listing) Not well, well, like a brother, intimately, biblically?

Rapp: Well, but... that’s not really true. He interviewed you for his podcast, a couple months ago—didn’t he?

Kath: Oh that, you listened to it?

Rapp: Yeah, but not your episode, because that’s the weirdest thing... your name is there... the date... the subject... but you click on it, nothing happens. Dead link. How come?

Kath: Technology, alas, is not my strong suit.

Rapp: Well, maybe you can fill me in on what you talked about.

Rapp: Well not just bones, right? Baba Yaga. That’s the name of the episode. I Googled her, (pulls out phone) from Wikipedia: "In Slavic folklore, Baba Yaga is a supernatural being or one of a trio, appears as a deformed and ugly old woman, flies in a mortar, wields a (pronounces PESTAL) pestle"—

Rapp: Pestle, thank you. "Often seen in tales like Ivan the Bold."

Kath: Or a fairy tale.

Kath: Most of them are.

Rapp: But she is a witch, right?

Rapp: Pam Riley said something about a Witch.

Rapp: Yeah, the boxer? She’s the one who told me you were on the podcast.

Kath: So you’re talking to me because I was on Henry’s podcast? That’s a crime?

Rapp: No, no. Although maybe it should be, that podcast is so bad, it’s criminal. But I was just speaking to some people and... I mean you seem to have a bit of a... kind of a...

Rapp: Don’t they call you something? You know what it is I don’t need to / repeat

Kath: Lots of professors have / nicknames.

Kath: Bone Beast. Because I teach about bones and animals, and I’m tough. It’s a joke.

Kath: Who told you that? Pam Riley?

Kath: Oh yes, Pam Riley, was in my class, she hates me. (Rapp: Oh). I failed her last semester. She has certifiable anger issues, and I’ve heard can be quite violent. (Rapp: Hmm.) So, if I were you, I’d look into her.

Rapp: I’ll keep my options open, but she also said that you and Henry maybe...

Kath: You have an ambiguous nickname, and a podcast interview and you’re suggesting I... ?

Rapp: Yeah, not your student, you’re not some predator... I mean, technically you are in a position of authority, but because you’re a woman it wouldn’t be as creepy, even though he is like, so much younger... what is he, twenty-one? Twenty-two?

Kath: —Maybe you should check your sources before you go around making serious accusations that could affect / people’s livelihood—

Rapp: What exactly do you think I’m / accusing you of

Kath: I’m very sorry that boy is missing, and I sincerely hope you find him. If you’ll excuse me, I have a class to teach.

Rapp: Well, I’ll just leave it here. In case you want to get Ethiopian sometime. (on his way out) Hey, you know about any witches here in Whittock?

Kath: I’m sure I don’t need to tell you this, Detective, but witches aren’t real.

Excerpt from Yaga by Kat Sandler, a play published by Playwrights Canada Press. Copyright 2022 by Kat Sandler. Reprinted with permission.

Kat Sandler is a playwright, director, screenwriter, and the artistic director of Theatre Brouhaha in Toronto. She has staged seventeen of her original plays in the last eight years, including Yaga and the concurrent double bill of The Party and The Candidate, where the same cast raced back and forth between two theatres to perform two simultaneous plays. Her play Mustard won the Dora Mavor Moore Award for Best New Play and BANG BANG was nominated for the same award. Kat is a graduate of the Queen’s University Drama Program and is based in Toronto.

She’s more than just a wicked old witch. Baba Yaga is a legend, usually known as that elderly woman who lives alone in the woods and grinds the bones of the wicked. But what if she was actually a sexy, smart, modern woman operating off of morally ambiguous motives?

A detective finds himself in a small, isolated town asking, what does the disappearance of the young heir to a yogurt empire have to do with some random lore about an old witch? Matched by an apprehensive local sheriff, a university professor with a taste for younger men, and a whole cast of curious characters, the Slavic myth of Baba Yaga twists into a new labyrinth of secret lives, ancient magic, and multiple suspects.

This genre-bending comedic fairy tale meets thrilling whodunit gives voice to an antihero of epic proportions while interrogating how her story has historically been told by men. From now on, you’ll remember the name Baba Yaga for the right reasons.