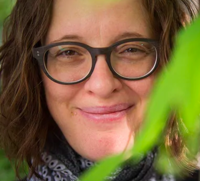 A walk in the woods is a deceptively simple thing. From the complex ecosystems we pass to the psychological effects of spending time in a natural setting, our simple walks can be something fascinating - as Ariel Gordon knows so well.

In Gordon's Treed: Walking in Canada's Urban Forests (Wolsak & Wynn), she takes readers along with her on walks in the heart of Winnipeg's forests, in BC's northern Rockies, in rural Manitoba, and more. As she walks, we learn - about trees and mushrooms, climate change and urban forestry. The relationship between the individual and the natural world, as well as the city and nature, are explored in thoughtful, witty, passionate prose.

Walking with Gordon is a treat, and we're thrilled to invite readers along via this excerpt from Treed, courtesy of Wolsak & Wynn, where Gordon reconsiders her definition of what counts as part of an urban forest, tells us about baseball bat-sized zucchini, and more. 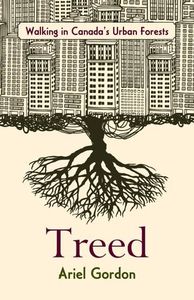 My teeth are full of emergency carrots and dirt.

Two weeks ago, I had side-stepped the shoes writer Donna Besel stored under a zucchini leaf in her section of the condo garden in St. Georges, Manitoba, to pick carrots. It was August. Donna had proposed a meeting of our writing group at her house, which meant two hours in the car from Winnipeg. She’d promised us a swim in the Winnipeg River as partial payback, so we’d brought our bathing suits. Donna had also invited us to pick what we wanted from her garden.

The garden is on a long grassy swath of land between the road and the river that belongs to Manitoba Hydro. The land is technically water storage land, a Hydro easement. Manitoba Hydro allows all kinds of semi-permanent structures on easements, including docks, boathouses and sheds as well as gardens. But nothing permanent, because rivers and lakes can flood and shorelines can collapse.

Typically, the products of a garden – fruits and vegetables, flowers and herbs – wouldn’t be considered part of the urban forest. But the more I think about it, the more I feel my way through the concept, the more I keep adding any greenery under the trees and shrubs to the total. My conception is now closer to the idea of biomass than urban forest, which is to say "the amount of living matter in a given habitat, expressed either as the weight of organisms per unit area or as the volume of organisms per unit volume of habitat."[i] Some treed cities, for instance, have sequestered the same amount of carbon (measured in tonnes per hectare) as temperate forests and tropical rainforests.[ii] Or maybe ecosystem is a better term, being "a system, or a group of interconnected elements, formed by the interaction of a community of organisms within their environment."[iii] We’re used to categorizing forests in provincial parks and in the wild by the types of trees present, and the urban forest, in most “settled” places, has a mix of native and introduced tree species. When you add in common urban animals like squirrels and raccoons, coyotes and white-tailed deer, you’ve got yourself a recognizable ecosystem.

For me, everything that isn’t asphalt and concrete is part of the urban forest and helps us survive the city. So that’s boulevard trees. That’s apartment planters and full-on gardens, greenhouses and cemeteries. That’s anything that sustains, that provides comfort or supports life.

Cue the writers wading into the late-summer garden. Poet Sally Ito was after Donna’s beets, which were as big as a baby’s head. Sally had found a gardening fork. Novelist Erna Buffie wanted Donna’s cucumbers and was rooting around amidst the soft, prickly vines.

Erna called out: "Donna, there are shoes in the garden!"

"I know," Donna said as she bent over a row of plants. As her plot was on one edge of the garden, she could throw the summer squashes she’d just picked on the soft grass. "Those are my gumbo shoes."

I wanted carrots, so I found that row and got to work, pulling on the greens attached to two fat carrots, their necks sticking up out of the soil. They didn’t budge. I scratched at the dirt, wiggled the carrots back and forth, and pulled some more.

"Ariel, are those carrots resisting you?" Donna asked, a mischievous smile on her face.

"I think I’ve got them," I answered, heaving them out. I took the greens from Sally’s beets and hauled on a few more carrots, but Donna said that I couldn’t take them unless I also took at least two zucchini.

That’s a common arrangement in late-August Manitoba, when zucchini are as big as baseball bats but still edible. Around this time of year, Manitoba gardeners start to fizz with anxiety that they won’t be able to find homes for all their zucchini, that they’ll get bigger and wider and become inedible or, worse, rot on the vine. I sent Mike a picture of my haul: two summer squashes, a respectable bundle of carrots and some beet greens.

Most of the veg I eat in summer comes from local sources: my CSA farmer grows carrots that I’d characterize as sweet, even pretty. My plan for Donna’s carrots was to dice half of them into veggie chilli, a week’s worth of lunches for Mike, Anna and I in one pot. The other half I would grind down with my face, one carrot at a time.

But the next morning, I heard that my friend Lauren Carter’s mother, who’d flown in from Ontario to help Lauren unpack her new house, had almost immediately had a trio of brain bleeds brought on by an enormous blood clot in her head. Which is to say that she had three strokes. Three hemorrhagic, or non-typical strokes, and no-one knew what was going to happen.

Lauren and her husband Jason and her sister Carey, freshly flown in from Ontario, had already spent a day and night in the hospital. Lauren said that every time they left the hospital, they half expected their mother to die before they returned. But they needed to eat, and since I live close to the hospital, I asked them to dinner and served Donna’s carrots, which I roasted and served alongside ground turkey sautéed with onions, garlic and brown rice.

The three of them put their heads down and ate with quiet gratefulness. I knew they were feeling life return to their tired bodies. That their stomachs were less sour, their eyes less sandy, just because they’d eaten something. Seven excruciating days later, Lauren’s mother put on lipstick and started fretting about her own garden, back in Ontario.

Three days later, while eating Sunday dinner at his parents’, Mike got an email. Patrick, his oldest friend, wrote to say that he’d heard that his backcountry hostel in BC was close to an active forest fire. The fire service was loaning out pumps and fire hoses to homeowners in the affected areas, but the pumps needed gasoline every ten hours.

The cabin was fifteen kilometres down a poorly maintained logging road. And Patrick’s friend, who kept an eye on the place when Patrick wasn’t around, couldn’t make the arduous, axle-breaking trip two or more times a day. Patrick was in Winnipeg, taking care of his own stroke-affected mother. But he needed to get out to BC now.

"Do you want a ride out there?" Mike replied.

"Yes, please," Patrick said. They agreed to leave the next morning.

I got up early that Monday morning and packed them lunches from what was in the fridge: sandwiches stuffed with shaved turkey, a little container of homemade pickles, baggies of dried apple slices, and a big bag what I now referred to as “emergency carrots,” split like kindling.

It took them seventeen hours, driving straight through, to get to the cabin. The email messages from Mike counted off the hours.

"Just stopped for gas in Wolseley, SK. The sandwiches were great. Thanks so much for making them. There is supposed to be frost tonight! Smooches."

"Fuelling up in Medicine Hat!"

"In Golden stopping for a nap in the car..."

That night, they saw the meteor that streaked through the skies of Alberta and British Columbia and filled my newsfeed. According to some estimates, the meteor was a metre wide when it entered the atmosphere and weighed up to five tonnes. The bright flash on most videos was the meteor exploding, scattering fragments around the Kootenay region.[iv] When they arrived in Revelstoke, it was choked with smoke.

Ariel Gordon is the author of two collections of urban-nature poetry, both of which won the Lansdowne Prize for Poetry. Recent projects include the anthology GUSH: menstrual manifestos for our times, co-edited with Tanis MacDonald and Rosanna Deerchild, and the third installment of the National Poetry Month in the Winnipeg Free Pressproject. She lives in Winnipeg, Manitoba.

With intimacy and humour award-winning poet Ariel Gordon walks us through the streets of Winnipeg and into the urban forest that is, to her, the city’s heart. Along the way she shares with us the lives of these urban trees, from the grackles and cankerworms of the spring, to the flush of mushrooms on stumps in the summer and through to the red-stemmed dogwood of the winter. After grounding us in native elms and ashes, Gordon travels to BC's northern Rockies, to Banff National Park and a cattle farm in rural Manitoba, and helps us to consider what we expect of nature. Whether it is the effects of climate change on the urban forest or foraging in the city, Dutch elm disease in the trees or squirrels in the living room, Gordon delves into our relationships with the natural world with heart and style. In the end, the essays circle back to the forest, where the weather is always better and where the reader can see how to remake even the trees that are lost.