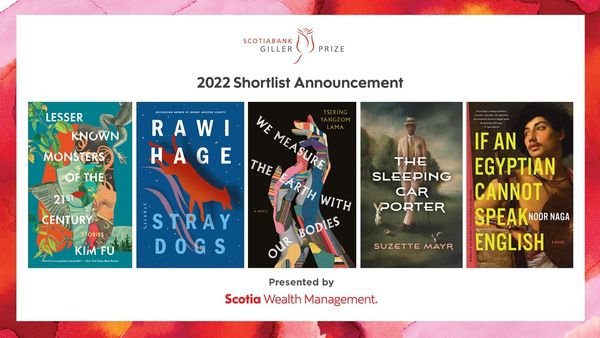 This morning during an event in Toronto which took place, appropriately, at The Jack Rabinovitch Reading Room at the Toronto Reference Library, the Scotiabank Giller Prize announced its 2022 shortlist. The late Rabinovitch established the prize in 1994 in honour of his wife, Doris Giller, the former literary editor of the Toronto Star, who passed away in 1993. Rabinovitch passed in 2017 and was much mourned by the Canadian literary community.

Judges Kaie Kellough, Katie Kitamura, Casey Plett (jury chair), Scott Spencer and Waubgeshig Rice, had the task of selecting the five finalist books from the 14-book longlist, which were in turn selected from over 140 submissions from publishers across Canada.

It's a good year for short stories – both longlisted short fiction collections made it through to the shortlist, along with three novels. Also notable is the debut on the list, We Measure the Earth with Our Bodies, an impressive feat from a new writer up against highly decorated veterans. It's also a great year for Coach House Books, the Toronto-based independent press that is celebrating not one but two books on the shortlist this year, by both Mayr, who has long published with the press, and Seattle-based Fu, whose work has also won numerous awards. Hage has been nominated for the Giller Prize previously for his novel Cockroach.

The winner will be announced November 7 at an in-person gala and will receive $100,000 courtesy of prize sponsor Scotiabank, which has supported the award since 2005.