Nearly 100 years of history separate Cyril and Edward, two mixed race Black men who made Toronto their home in Sheila Murray's Finding Edward (Cormorant Books). When Cyril arrives from Jamaica in 2012, he navigates racism, education, friendships, love, and financial pressures. But it isn't until a chance encounter leads to his discovery of a suitcase packed with old photos and letters—in which he finds information about Edward, a man whose life mirrors his own in many ways—that his purpose is revealed to him.

Cyril becomes determined to find the end of Edward's story, which started so similarly to his own, with abandonment by a white parent. In his quest, he discovers much of Canada's hidden Black history as he traces Edward's cross country travels. As his personal mission becomes intertwined with larger questions about what, like Edward's story, has been concealed over the years, Cyril finds himself considering not only his connection to Edward but to his new home.

Sheila joins us today to speak about her powerful new book as part of our Long Story interview for novelists. She tells us about her connection to the Toronto neighbourhood that forms a vibrant backdrop for the story, how she related to each of the two main characters, and how her research, much like Cyril's, "revealed the remarkable achievements of Blacks in Canada over centuries". 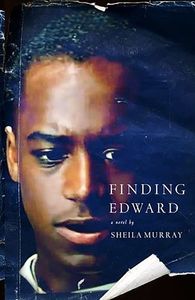 I had been writing short fiction for many years, and belonged to a terrific writers’ group with seven people, most of whom were publishing short fiction. Most of us, around the same time, began writing novels. We got pretty good at sharing and critiquing chapters, and discussing plot and character development. Producing chapters for the group was a rewarding commitment and pretty much guaranteed that I’d finish the book.

Finding Edward is largely set in Toronto where I had lived for decades, always near Queen Street. Some scenes are in the hip and dynamic Queen Street West neighbourhood where I lived, and where Cyril, my central protagonist, visits his mentor. A fabulous urban park is a landmark there, and that’s where Cyril not only despairs, but also celebrates friends and inspiration. Edward, the book’s eponymous character, lives near Queen but much further west, in a neighbourhood characterized by rooming houses that range from dangerously inadequate to sustainable. I have also lived there. Cyril’s basement apartment is a long way from Queen, in Toronto’s northern outer ring, which has become a destination for immigrants from around the world, far from the urban dynamic of downtown. The novel follows Edward to other Canadian places as he travels the country. Closest to his heart is Africville, in Nova Scotia, where he settled and was deeply in love. By the time the City of Halifax obliterated the village, he was long gone. The story also sees Cyril in Jamaica, where he was born and raised, and whose small family has become his financial responsibility. His studies at Ryerson University (where I earned an MA in Immigration and Settlement Studies), are motivated not just by a thirst for learning, but also the need to establish a career with a decent income.

My impetus for writing the novel was an image that I’d had in mind for some time: In the storefront window of an antique shop on Toronto’s Queen Street West at night, I see a young, mixed-race man, sitting at a dining table under a large crystal chandelier with five other people of different ages and races. That was my starting point, an idea for a final scene that is no longer in the book, nor are any of the other characters at that table—except for the young, brown man, who is Cyril. The feelings the scene evoked for me, friendship, resilience, pleasure, belonging, accomplishment, celebration, all remain in the book.

I am nearer to Edward’s age, than to Cyril’s. In the earlier stages of writing I felt closer to Edward, even though he grew up in an era and milieu that was utterly foreign to me. But, over time, I found my younger self in Cyril. Despite being social, and eventually making friends, he is a nonconformist at heart, and I understand the choices he makes, and the directions he takes. Among the minor characters, Pat is a particular favourite. Her condition would meet a mental health diagnosis, but she is as alive and exuberant as any other in the book, and is possibly Cyril’s most important connection. Rachel, with whom Edward has a loving, sexual relationship, only appears in one chapter that’s set in a remote logging camp in British Columbia. Her time on the page is brief, but she haunts me. Rachel represents the monstrous things that human beings do to each other. I am also fond of the man who teaches Edward that there are two ways to see the world as a railroad porter on the Pullman carriages. His is a sophisticated perspective on the accumulating horrors of microaggressions that are deemed acceptable in the context of systemic racism.

Finding Edward quickly became a look at Black history in Canada, not only through Edward’s experience over 92 years, but also encompassing glimpses and fragments of history since the first Black adult, a translator, and later, the first enslaved child stood on British North American soil in the 1600s. Like Cyril, I spent time searching through microfilm and computer databases for the sorts of experiences Edward would have had as a hardscrabble and marginalized man, growing up in a work house, and escaping to make his independence. Black historians and sociologists have established a growing record of Black experience in Canada, and for that I am truly indebted. Personal, experiential research took me to Africville, in Nova Scotia. A chapter in Jamaica is informed by my annual trips there after my parents fulfilled my Jamaican father’s dream of retiring to the outskirts of a busy market town in the hills up from the north coast. But figuring out where a car would turn left, further afield, or the accuracy of colloquial references, was informed by my young Jamaican friends.

The colour of my skin is brown. I am mixed-race, raised in England and transplanted to Canada as a teenager. Finding Edward is, in part, an exploration of what it means to be bi-racial in an alien culture. The book’s central character, Cyril, is a young, Jamaican, mixed-race man, newly arrived in Toronto. In his determination to discover what happened to Edward, a mixed-race man born in Toronto in the 1920s, Cyril’s research (and mine) revealed the remarkable achievements of Blacks in Canada over centuries—histories that are buried beneath the mainstream narratives that frame our understanding of Canada. Fully grasping the implications of those hidden histories has been a very welcome revelation for me.

Sheila Murray’s short fiction has been published in many literary journals including Descant, The Dalhousie Review, and The New Quarterly. Finding Edward is her first novel. Murray is an advocate for social justice and currently leads a grassroots, volunteer-driven initiative that engages urban residents in adapting to local climate change impacts. She was born and raised in St. Albans, England, and now lives in Hamilton, Ontario.

Cyril Rowntree migrates to Toronto from Jamaica in 2012. Managing a precarious balance of work and university he begins to navigate his way through the implications of being racialized in his challenging new land.

A chance encounter with a panhandler named Patricia leads Cyril to a suitcase full of photographs and letters dating back to the early 1920s. Cyril is drawn into the letters and their story of a white mother’s struggle with the need to give up her mixed race baby, Edward. Abandoned by his own white father as a small child, Cyril’s keen intuition triggers a strong connection and he begins to look for the rest of Edward’s story.

As he searches, Cyril unearths fragments of Edward’s itinerant life as he crisscrossed the country. Along the way, he discovers hidden pieces of Canada’s Black history and gains the confidence to take on his new world.