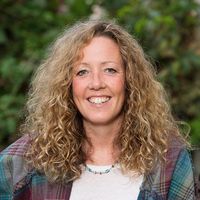 There are a lot of novels that open with disappearances, but very few with the return of the disappeared. Not only does Katie Welch's extraordinary new novel Mad Honey (Wolsak & Wynn) see Beck Wise wandering back to his girlfriend Melissa three month after vanishing without a trace, but he returns with the memory of having lived as—and here is where things get really interesting—a swarm of bees.

From this utterly unique set up, Welch only gets more fascinating. The mystery of Beck, which in turn brings up the mystery of Melissa's long-vanished father, unravels in twists and turns against the backdrop of Melissa's struggle to keep her family farm going. Richly descriptive, tightly plotted, and wonderfully fresh, Mad Honey celebrates both the tenacity of a woman determined to find truth and peace and the mysterious insect species whose history is so interwoven with our own.

Today we're proud to share an excerpt from Mad Honey, courtesy of Wolsak & Wynn, in which we meet Melissa on her birthday and get a glimpse of her complex nature and her initial reaction to Beck's return. 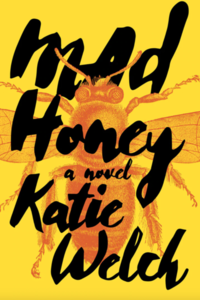 The day Beck came back, Melissa was trying to take a day off. It was September 14, her birthday. Daphne had insisted she would do all the morning chores, so Melissa was lying on her side in the grass beside the flower garden, pushing away a dynamic, omnipresent mental list: harvest pears and tomatoes, clear out bean rows, check on the chickens, feed the goats and the donkey, get an oil change on the truck, clean up the outdoor canning kitchen, go over the farm financials and on and on.

It was a breezy day, and the way the grass moved was mesmerizing – swords of pale green clashing silently, battling against a backdrop of white and blue. The breeze blew strong enough to sway individual blades of grass but not the stalwart orange poppies beyond the lawn. The world was sideways from where she lay, the clouds tall instead of long. Orange poppy petals exploded around pointillistic black centres suspended on hairy, pale green stems perpendicular to her body. The weight of her head pressed into the bent elbow of her warm, suntanned arm. A dark lock of hair tumbled across her line of sight, and she tucked it slowly, neatly, behind one of her prominent ears, the fleshy earlobe triple-pierced and adorned with three silver rings. Her broad hands were proportionate to her taller-than-average height and perennially dirty. She wore a creamy white sundress that day – unusual, because she eschewed dresses; they weren’t farming clothes. Daphne, who rocked splashy, multicoloured sundresses in the fields, would disagree.

Melissa was blissing out on poppies painted against deep blue sky. The centre of each poppy was made up of tiny, delicate petals arranged in ever-tightening concentric circles, swirls of orange deepening to a red that was almost black. A rivulet of drool escaped the low side of her mouth and descended, slow and glistening, to her outstretched arm. She observed one poppy in particular, the most splendid flower. The breeze settled, and her whirring thoughts settled too. For a few seconds she experienced the illusion of suspended time, achieving meditative success, the elusive quiet mind she’d heard yoga enthusiasts brag about. She felt and saw only the perfection of the tableau: border of spiky grass, vermillion floral profusion, hemisphere of sky extending to the limits of her vision.

A sound broke the spell, the characteristic buzzing of a honeybee, a high, soft pitch, not the guttural rumbling of a bumblebee. She heard the insect approach but didn’t look for it, focused as she was on the epitome of an orange poppy in all its resplendent stillness. When the bee flew into her sight, she pinpointed the little creature’s location by its insistent hum. Every hair on the bee’s body stood out in sharp definition. Melissa imagined she could see the mosaic of its compound eyes, thousands of iridescent surfaces creating pixelated sight. Quivering in anticipation, the bee navigated the forest of orange flowers and, improbably, chose to land on the very flower she observed. Six black legs twitched, extended and contracted as they assumed the insect’s weight: landing complete.

Melissa broke her meditation, reminded again of yoga classes she had once attended, and how she used to lie still during savasana, waiting for the all-clear so she could get going. She sat up slowly, abs contracting bottom to top, and the universe righted itself. In the distance, the back side of a stone farmhouse loomed up behind the flower garden, erupting out of the earth’s crust, but she kept watching the bee, zeroing in on the delicate filigree of veins in its wings. The flicker of something human in an upstairs window, an arm waving, caught her eye. She tore her gaze away from the poppy and its fascinating striped occupant. Why would you interrupt me now?

Daphne was waving frantically from a bedroom window. Her hair, which she either twisted into tidy braids or allowed to puff out freely, defying gravity, was big that day. A halo of tight brown curls filled the window, and the whites of outsized eyes shone like searchlights in the middle of this mane. Her mouth opened and closed in a pantomime of a spoken name – wide, narrow, wide, repeat.

The faraway voice was an itty-bitty insect noise by the time it reached Melissa, but there was no mistaking the urgency in the swing of Daphne’s arm, or the too-round aperture of her mouth. In an easy movement Melissa levered her nearly six feet of muscle and bone to its default upright position. She reached down and snatched a pair of mirrored sunglasses from the grass, catching a glimpse of her distorted features in the lenses – broad lips, roman nose, black caterpillars of never-plucked brows like thick bridges over hazel eyes. Genetic gifts from her father, mostly; nobody believed her short, blond, snub-nosed mother was biologically responsible for her Amazonian frame and glossy dark-brown hair. She didn’t hurry back, but sauntered, relaxed for the first time in weeks and loath to get uptight again. Daphne and her arm disappeared from the upstairs window, then emerged with the rest of her springy, lithe limbs from the kitchen door at the back of the house. She had the knack of being beautiful, and could do it in ripped pyjamas with a head cold. On the day Beck came back Daphne was especially striking in a green tie-dyed tank top, frayed jean shorts and bare feet. She pursed her lips and arched her eyebrows; Melissa could tell that she’d regretted yanking the birthday girl away from the repose that was supposed to be her present.

“Sorry. It’s Beck. I wouldn’t have interrupted you for anything less.”

Beck had departed one evening in spring, leaving a short note saying he would be back, but taking his toothbrush and his favourite jeans and shirts. As ever, Melissa had been busy. A week had gone by before she’d wondered if he would keep his written promise to return, and at a month she’d known he wouldn’t. She supposed he had broken her heart; Daphne assured her it was definitely broken, but there were ways to shut off inconvenient feelings. When she was young Melissa had found a toggle-switch in her chest. Flipped to ON, the switch opened a circuit and allowed pain to course through her body like electricity through a wire. In the OFF position, the current halted. With her heart switched off she could still profess love, nurture animals and mourn sad news. It was as simple as saying the right things, pantomiming feelings, playing emotional charades. But hurt accumulated behind this electrical gate, and there were nights when alone in her room, she flicked the switch and let pain circulate, wiping away the weakness of tears with rumpled bedsheets. As time passed she’d found she could live without Beck her lover. But he was also her beekeeper, and he cared for the livestock: a dozen chickens, Hotay the donkey, and goats Jeffrey and Edna. She had muffled romantic sorrow when Beck had evaporated, but business-wise, his departure had been a letdown and a big inconvenience, and it had pissed her off. Ironically, when Beck vanished, he had been trying to protect the Hopetown Farm beehives from colony collapse disorder, a mysterious plague marked by vanishing bees. In the crispy, stifling last weeks of August, the rest of the farm staff had cobbled together what they knew about beekeeping and honey extraction, and planned for the imminent honey harvest. When Melissa had cursed and complained and worried out loud about the bees, she’d overheard sticky sympathy: This is so hard for her – she misses Beck so much.

Daphne chewed her bottom lip and shifted her weight from side to side in an impatient dance, waiting for a reaction. Melissa stifled a germ of excitement – he’s back, he came back – and concentrated on summoning up the bitter taste of Beck’s betrayal.

“Do me a favour? When he gets here, tell him to go away.”

“But don’t you want to know where he’s been?”

“Not really. I stopped wondering a long time ago. Please tell him to leave.”

Daphne narrowed her eyes and folded her arms. “Maybe he got amnesia,” she said. “You don’t know what happened.”

“Natalie called. She spotted him on the road and pulled over to talk to him. He told her he was coming over here today to check on Hotay.”

“Check on Hotay?How does Beck know Hotay’s still alive? What is he thinking, that he left just yesterday? Wow. Just, wow.”

Melissa pushed past Daphne into her favourite room in the farmhouse, an oversized, sunny, butter-yellow kitchen with a blue, red and green Mexican tile splashboard running along spacious wooden countertops. Scooping an apple from a big terracotta fruit bowl, she took an aggressive, juicy bite, chewed vigorously, and swallowed hard.

“I don’t want him here. Deliver that message for me. Come on, it’s my birthday – please?”

Daphne picked up her own apple from the bowl and crunched into it, her bite matching Melissa’s in intensity. She spoke wetly, around a mouthful of fruit.

“Nuh-uh. I’m not going to deliver that message.” Daphne wiggled a remonstrative finger. “You need to tell him yourself.”

Katie Welch writes fiction and teaches music in Kamloops, BC, on the traditional, unceded territory of the Secwepemc people. Her short stories have been published in EVENT Magazine, Prairie Fire, The Antigonish Review, The Temz Review, The Quarantine Review and elsewhere. She was first runner-up in UBCO’s 2019 Short Story Contest, and her story “Poisoned Apple” was chosen as Pick-of-the-Week by Longform Fiction.

Katie holds a BA in English Literature from the University of Toronto (1990). Her daughters, Olivia and Heather Saya, share her passion for nature and outdoor recreation. Katie loves to cycle, hike and cross-country ski with her husband, Will Stinson, and they are creating a remote home on Cortes Island, in Desolation Sound.

When Beck Wise vanished his girlfriend Melissa Makepeace poured herself into caring for the family farm, silently absorbing yet another man disappearing from her life. But when Beck reappears three months later, thin, pale, with no idea what day it is and filled with memories of being bees, a series of layered mysteries begins to unravel. What had happened to Beck? Where did her father go? How can she keep the farm together? With gorgeous descriptions, deft characterizations and a page-turning plot, Mad Honey immerses the reader in a search for truth bounded by the everyday magic of beekeeping, of family and of finding peace, all while asking how much we really understand the natural world.