Lorrie Potvin knows a lot about telling stories. Her first book, First Gear: A Motorcycle Memoir, told the incredible story of her motorcycle journey from Ottawa to Winnipeg, at age 50, while living with multiple sclerosis. Now, her new memoir Horses in the Sand (Inanna Publications) acts as a sequel to First Gear, collecting the stories of her journey, from living through trauma and violence as a child to working as a successful tradesperson and artist who built her own house, and finding herself as a queer woman along the way.

With the frank, funny, brave voice she honed in First Gear, Potvin returns to inspire readers with her journey of self-acceptance and celebration, both as a queer woman and a survivor. Raw and honest, unflinching about the difficulties her early life created around relationships and identity as an adult, Horses in the Sand is a story of homecoming both internal and external, including Potvin's moving and unexpected discovery of her birth father and half siblings, and the Indigenous community she found through them.

We're excited to announce that Lorrie will be joining the Open Book team as our October 2022 writer in residence, sharing original writing on the WIR page throughout the month.

You can get to know her here today as we discuss Horses in the Sand. She tells us about taking clues from her mother's "fluid truth telling" to find her family story, how she's put in a lot of hours "circling the chair" as part of her writing process, and how her siblings have supported the healing journey she has found in her writing life.

And be sure to stay tuned for Lorrie's writer in residence postings through October. 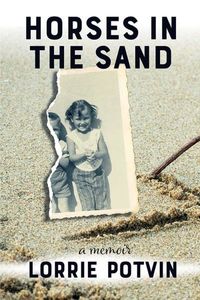 Horses in the Sand is the follow up memoir to First Gear: A Motorcycle Memoir (2015). When First Gear ended, it left a couple of questions unanswered. The question of who my biological father was was the most important one. My mom told me a story and had given me a name before she died. Since she tended to be fluid in her truth telling I was unsure if I’d ever find the ending to her story, but I did. I share that process about finding family.

I also tell the story of growing up queer, not quite fitting in, and how my identity has grown and changed throughout my lifetime.

Growing up in the 70s I wasn’t allowed to take shop in high school, but had to learn home economics, typing, and shorthand. I describe how I ditched secretarial work and entered the world of blue-collar trades when I was 20. I completed an apprenticeship as an Auto Body Repairer, and later taught the trade at the college level before becoming a high school shop teacher. A full circle moment.

Building my own house, getting tattooed and travelling through the mid-west, landing in the Standing Rock protest camp are some other stories.

Yes, it did. I wrote the content with the intent that I would arrange it in the same way I wrote First Gear, where the motorcycle trip was the structure for holding my stories. With Horses I didn’t struggle so much with writing the stories, but I wasn’t able to shape it in a way I thought would fit a greater vision. I ended up sequencing the stories in a way I thought made sense and submitted it to Inanna. After it was accepted for publication I agreed to a developmental edit, and my editor, Kaitlin Littlechild, did her magic. She saw the bigger picture that escaped me, identified the common themes, and organized my stories in a way that made the book so much better.

As an artist, even with my other work, there are time when I get too close and lose my way. I did step back, to give the pieces some time to percolate, but I still couldn’t grasp my vision, so I’m very grateful to Inanna for seeing the potential of Horses in the Sand and their continued support and guidance.

The space I have set up for writing is in a U-shape using three tables with a screen on the centre desk facing the window. I can lay out material and easily swivel around in my chair to access what I need. For my current project I drew two maps of the locations I’m writing about, and they are pegged in a way that I can easily see them. I’m a hands-on person that needs visuals.

I also need music and use noise cancelling headphones. When I’m especially engaged in the material, I never hear the tunes until I get out of the spell of writing. I don’t know why it works, but it does.

Lastly, when I’m deep in a story or project, my mind is crazy busy, so I have notebooks everywhere – my truck, beside my bed, my workshop, my bag, and numerous places I’ve forgotten. If not, I end up scribbling notes on napkins, envelopes, work benches, even egg cartons so I don’t lose those crazy thoughts, because you just don’t know which one is the diamond.

Great question. I call this circling the chair. I’ve put on a lot of mileage circling my chair. And, if I wrote as much as I thought about writing I’d have a stack of novels to claim.

There are several amazing and productive women I admire who get up early to work, somewhere between 4:00 to 5:00 a.m. I thought to be the same I had to wake as early as they do. It just doesn’t work for me. I do get up early, but I’ve learned not to imitate others. Squeezing myself into a space that doesn’t nurture me is toxic. I’ve come to understand that I’m happy and more productive when I’m accepting of my true way of being.

My prime time is morning to early afternoon. If I’m doing more circling than writing, I tell myself to just sit and write for an hour. It won’t hurt. There are days when it’s just an hour, others when it’s more, which is beautiful.

I also acknowledge it’s a privilege to have the energy, time, and resources to write and create art. It’s a special place to be, it gives me life, and there are people in my world who love and support me so that I’m able to be creative. They are deserving of my best.

Yes, I do, but I have the experience with First Gear to help me. It was about a motorcycle trip, but it was also about living with violence and childhood sexual abuse. I didn’t tell anybody, including my family, that I had written a book and that it was getting published until a few weeks before it was released.

My older brother and my mom had died by then. My other two brothers who lived with the same violence were very proud of me. Writing is healing and their support was incredibly affirming.

I touch on some of the abuse in Horses and even though self-promotion is still difficult for me I have lots of hope for it.

Having social anxiety, the thought of my first reading at a book launch in front of a large group of people made me incredibly nervous, like I needed a bucket. I practiced first with people I knew, and then read in front of those I didn’t know very well. It helped a lot.

I’m working on my first work of fiction called Two Rivers. It’s a novel about a community coming together, taking over local resources to find a missing girl. Secrets are revealed and the community will never be the same.

It’s been a lot of fun to have the flexibility to develop storylines and create characters.

Thanks for having me.

Tradeswoman, artist, and teacher Lorrie Potvin, a queerishly two-spirited Métis, is the author of Horses in the Sand: A Memoir and First Gear: A Motorcycle Memoir (2015), published under the surname Jorgensen. Potvin holds an Inter-Provincial Red Seal in Auto Body Repair and Refinishing and a diploma in Technological Education from Queen’s University. Lorrie lives on a lake north of Kingston in the area served by the High Land Waters Métis Council.

Horses in the Sand

Horses in the Sand, the author’s sequel to her first book, First Gear: A Motorcycle Memoir, is a collection of stories that document a queer woman’s journey from her sparse beginnings as a child to becoming a tradeswoman, teacher, and artist. With courage, humour, and frank honesty, the stories describe what it was like to grow up as a girl who was starkly different from “normal” and how “coming out” became a lifelong process of self-acceptance and changing identities. The stories also speak to the difficulties in participating in and maintaining healthy adult relationships when childhood beginnings are rooted in violence and trauma, and end with a triumphant account of fulfilling a long-time dream of buying land and building a home with her own hands. Ultimately, the memoir is a celebration of making art, telling stories, and of finding her birth father, a family of half siblings, and an Indigenous community whose presence she had always felt, but never knew she belonged to.