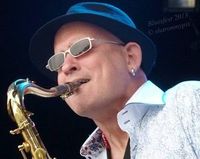 Born (Groundwood), author, poet, and musician John Sobol's newest picture book, dives into an experience that bonds us all yet is discussed relatively rarely: that of our own birth.

Told through a lyrical poem and featuring beautifully textured illustration by Cindy Derby, Born focuses on the sensations and feelings of an infant about to leave the womb. From the initial, ocean-like currents around her, she begins to journey forward into a world of breath, voices, and light. Swaddled by blankets and her mother's arms, she cries for the first time as a new world reveals itself.

A touching and compassionate look into the beginning of new life, Born is a truly unique work of love.

We're very excited to have John at Open Book today, where he discusses the deeply cathartic experience in Cairo that inspired his new book, the objectivity of creative choices, and why the audience is all that matters.

My first children’s book, Friend or Foe (Groundwood), was based on a story I made up one night for my young kids. It’s the story of a mouse who wonders if he might be friends with a neighbouring cat. After a series of unexpected events and close encounters, the book ends with the mouse still asking himself the same unanswered question.

When Friend or Foe was published, I was surprised by the reviews. They were positive, but many reviewers reacted quite strongly to the open-endedness of the book and mentioned how unusual it was for a kids book to not have a pat ending. Two different reviewers even used the word ‘existential’ in speaking of what seemed to me a light-hearted tale. I found this amusing, but it nonetheless made an impression on me.

When I sat down to write my second kids book, wondering what it would be about, it occurred to me that there might be a niche out there for me as an ‘existential’ children’s author. Not that I wanted to write Nietzsche for three-year olds, but I do have a knack for taking big ideas and making them accessible.

With this idea in mind, I tried to think of the deepest, biggest, and most ‘existential’ topic I could find for my next book. And I was both surprised and pleased to discover that I did indeed have a highly existential children’s tale to tell, one rooted in a deep and personal experience; a story about what it feels like to be born.

Although – truth be told – I don’t actually remember what it was like to be born, as a young man I experienced a profoundly immersive and deeply sensual memory of what it had felt like before I was born, when I was still in my mother’s womb, and I drew on that experience to write my story.

That strange event had occurred long ago, very late one night as I sat in a state of extreme psychological and physical exhaustion by the banks of the Nile River in downtown Cairo. At that time, I was a world-weary backpacker resting beneath the Egyptian moon without visa, money, friends, or backpack (stolen), on the verge of relapsing into a severe illness that had recently laid me up for weeks.

And yet it was a beautiful and rejuvenating moment, one that took me some time to make sense of as I was suddenly transported to a different sense of self, a different awareness of space and sound, of body and being. Eventually, as I sat there marveling at my altered state, I remembered a poem that I’d been writing as I travelled, one whose concluding line I had crossed out – and written back in – time and time again over the preceding weeks. And suddenly I understood why that line had fought so hard to stick around. The line read: ‘the traveler is welcomed back to the womb.’ And now, sitting beneath the heavy palms in an amniotic ecstasy, I understood that I truly was being welcomed back to the womb. It felt unmistakably like ‘home’.

I luxuriated in that comforting universe for what must have been an hour, until slowly the feeling faded. Yet I can still remember it, still feel it now, nearly forty years later.

Which is why, when I began writing Born, I was able to write with confidence from the perspective of an unborn baby and share the sensual intensity and richness of that version of ourselves; one we have all experienced, yet which is buried so deeply in our memories that it is for most of us irretrievable.

What’s more, as a father, having supported my wife through two pregnancies and births, I have been a part of that magic from the outside as well.

All those experiences and motivations led me to want to write a simple, deep, and inspiring story – an existential story – about the extraordinary magic of birth, as experienced by a child being born.

Life is good. Love is beautiful. It is amazing that you were born!

I think there is both more and less craft in writing for children than most people think. My late father, Ken Sobol, was a wonderful children’s writer. Among other things, Astrid Lindgren handpicked him to write the Pippi Longstocking animated series that Nelvana produced! I wrote a few of those episodes myself, under his guidance, and learned a tremendous amount from him. He taught me that – contrary to the widely held belief that artmaking is subjective – the creative choices we make are either right or wrong. In particular when you try and write funny, as he could do brilliantly, you either succeed by making people laugh, or you don’t. There’s no subjective middle ground. There are degrees of rightness or wrongness, and there are countless ways to be right, just as there are countless ways to be wrong. But every choice lies somewhere on that scale, not floating subjectively in a sea of relativity. The goal is to always know how to differentiate between right and wrong creative choices, and to always make the best choice available. It’s what I strive for anyway. Sometimes I even succeed.

What's your favourite part of the life cycle of a book?

A socially-distanced opera with composer Tim Brady, and another children’s book about a band touring Canada in an old car.

John Sobol is an author, musician and poet who has performed at festivals and clubs in a dozen countries. His first picture book, Friend or Foe (illustrated by Dasha Tolstikova), was described in Brain Pickings as “a charming modern-day fable.” He has toured an acclaimed one-man show called Two Million Years of Technology, and he has written many popular TV shows for children, including Pippi Longstocking and Under the Umbrella Tree. John is a father and a feminist. He lives in Ottawa.

In this lyrical poem, author John Sobol brings us his imagined vision of a universal experience, that of being born. As she is born, the baby in this story goes through a time of intense movement and change before she takes her first breath and cries. Warm hands wrap her in a blanket, and she is held in loving arms. She has arrived!

Sobol captures the mystery and wonder of the birth experience in this deeply sympathetic tale. Reading this book together will enable children and their parents to celebrate the joy and emotional power of that remarkable moment.