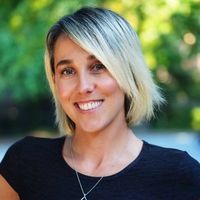 Empathizing with others and speaking out against injustice are central themes to author Bree Galbraith's newest book Usha and the Stolen Sun (Owlkids).

Little Usha's town has been deprived of sunlight for longer than she's been alive. Her grandfather, who still remembers the days when it shone, tells her stories of the sun's warmth and brightness, and of the people who took it away, building a wall to keep it all to themselves. Usha, indignant, storms to the wall with everything she has: she kicks at it, yells at it, and even tries to climb it. But the wall doesn't move. Exasperated, Usha gets one final idea: she remembers the power of her grandfather's stories, and begins to tell them to the people on the other side of the wall. Using a quiet voice so they can barely hear her, the people on the other side strain to hear her. Eventually, intrigued by her stories, they begin dismantling the wall to let the sun shine on Usha and her town once again.

Featuring vivid, imaginative illustration by Josée Bisaillon, Usha and the Stolen Sun teaches children about the importance of standing up for what's right and the power of open, non-violent communication.

We're thrilled to have Bree at Open Book today to discuss how a strong-willed little girl inspired her newest book, the battle against self-doubt, and how a plot involving a wall suddenly became more politically relevant than she expected.

Tell us about your new book and how it came to

Usha and the Stolen Sun is about a little girl who lives with a terrible injustice forced upon her by people of generations ago – a wall built to block the sun from shining on them. She goes on a mission to bring down the wall, but when she finally faces it, she realizes it’s completely unmovable. But Usha is cunning and brave, and knows she has a voice that deserves to be heard. She begins to tell the stories her grandfather told her all her life to the children on the other side of the wall and speaks quietly so that they have to remove the bricks to hear her! Usha inspires the people behind the wall to take the action she needs to create change. The story came to be when I met a little girl much like Usha at a reading of another book of mine. She was sitting right up at my feet, and during a Q&A period, she told me to write a book about her. Obviously, she was a dynamic, strong minded little girl, but I asked her to tell me more about herself – what about her would make a good story? She was direct and clear and told me that when she speaks, no matter if she’s whispering or yelling, people listen, and yet she had never seen someone like her in a book! She instantly reminded me of a Rumi quote I used to tell my boys when they were younger, and it was then that Usha was “born” in my mind!

Find your voice. If you see something that is unfair or unjust, speak up! Not only does what you have to say matter, it’s integral to your health and the health of your family/classroom/city/country/planet. Never give up on sharing your story, no matter if it makes other people uncomfortable to hear. And, on the other side of the coin, listen to others who are telling you when something makes them upset. Really listen, even if you have to move something out of the way to hear them.

The book went through a lot of small changes in the text. It was originally written before a certain someone announced he was running for president across the border, and his focus on building a divisive society and an actual wall made us very aware of the way the book could potentially be received in the minds of children. Having children of my own, it was impossible not to see that a connection would be made between current events, and the use of a wall as a metaphor in the book. Small sentences were reworked to make the book stronger and stand alone, and to make the point hit home even harder. We have to work to bring walls down, NOT build them up!

I relate to both Usha and her grandfather. I often feel like some of the stories I tell my kids about a time when I had to put up with things simply because I was a girl are much like what Grandfather tells Usha. He felt powerless as I once did. There are structures in place today that ensure some people have a more difficult life than others. Grandfather shares this fact, and Usha makes it her job to bring an end to it. She is much like me, in that I hope to use writing to do the same thing. Books like Usha, with this message, are my way of dismantling what I see to be unfair by shining a light on it and motivating kids to look at life in a different way, through a more critical lens.

When I am at the point of writing a story, it has existed in my head as a moment I have captured, a snapshot that I can’t un-see. It then grows into an idea, then migrates to the notes section of my phone, and then finally I am overtaken by the story, and I get it out! So, I need patience from my family who see me going through the process and have to put up with me talking about a character (like Usha) as if she were a real person. They humor me as I wonder aloud, “what would Usha do?” in different scenarios, until she’s fully formed, and ready to be shared.

I know now not to stress so much that I will never have any more good ideas (which is a nagging feeling each time I finish a book). I have learned that part of my process is self-doubt and being able to reign it in is what I need to do. I have to continually prove to myself that I can do this by doing it.

Yes, I feel that people think writing picture books is easier than it is. Not among other writers, but in general, there’s a lack of understanding of the process. You have to tell a full story, with strong, multi-faceted characters, and a rich plot without holes, have a message without preaching, and be okay with having massive sections cut out because all this has to take place in under 1000 words! You also have to learn when images can tell the story better than words can, push your ego aside, and accept that it’s a partnership between words and pictures!

Bree Galbraith is a UBC Master of Creative Writing graduate and author of award winning titles, Once Upon a Balloon (Orca 2013), and Milo and Georgie (2017). Usha and the Stolen Sun is Bree’s third book, and several more follow in the coming years, including the Wednesday Wilson series (Kids Can Press 2020-22). She lives in the heart of Vancouver with her family, where when she’s not writing, she’s definitely outside enjoying the wonders of the west coast.

Usha and the Stolen Sun

Usha lives in a town where the sun hasn’t shone for as long as anyone can remember. Only her grandfather remembers its brilliance and tells Usha stories about the time before other people took the sun away, building a wall to keep it all to themselves. So Usha decides to do something and sets off in search of the sun.
When at last Usha reaches the wall, she tries to kick it down, climb it, yell her way through it—but the bricks don’t budge. It’s only after remembering her grandfather’s words and hearing voices on the other side of the wall that cunning Usha changes her plan to make sure her voice is heard. She shares her grandfather’s stories, even the ones that rightfully make her angry, and piques the curiosity of the people on the other side until they are inspired to remove the bricks, one by one to better hear what Usha has to say.
Because Usha didn’t give up, they bring the wall down.
Inspired by the idea of civil discourse, this book offers a timely message of communication and compassion.