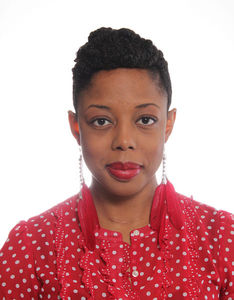 Nadia L. Hohn is a teacher and an award-winning children's author, known for Malaika’s Costume and Malaika's Winter Carnival. This summer she's back with a new picture book: A Likkle Miss Lou: How Jamaican Poet Louise Bennett Coverley Found Her Voice (Owlkids Books, illustrated by Eugenie Fernandes), which tells the story of the titular poet.

Known as Miss Lou, Louise Bennett Coverley (who later spent more than 20 years living in Canada) was an iconic Jamaican artist and entertainer and has been credited with popularizing and normalizing the use of Jamaican patois in poetry and music. Focusing on her early life as she struggled to reconcile her love of the poetry she learns in school with the beauty and rhythm of her beloved patois dialect, the story is one of art, identity, and finding a voice. The book even includes a glossary of Jamaican patois words and phrases, letting young readers explore language and connect with the story of one of Jamaica's most treasured figures.

We're excited to welcome Nadia to Open Book today as part of our Kids Club interview series. She tells us about the class assignment that sparked A Likke Miss Lou to life, the Canadian university archives that helped shape the book's identity, and her important observations about the strengths and weaknesses in children's publishing in Canada.

Also, you can catch Nadia in person at the Toronto launch for A Likkle Miss Lou on September 14. Get all the details here!

In winter 2012, I took the Writing Non-Fiction for Children course in the continuing education program at George Brown College, taught by author Cathy Rondina. I was given the assignment to write a biography about someone, as well as a query letter for a publisher or agent. I had no difficulty choosing the person for my biography. I chose Louise Bennett Coverley, better known as Miss Lou. I had loved her work and it inspired me since I discovered her in a book called Mango Spice: 44 Caribbean Songs and its cassette at age 10. In reference to a quote that Toni Morrison said, I wrote the book that I wanted to see in the world. I would have loved to read a book like A Likkle Miss Lou.

To young people in the Jamaican and/or Caribbean diaspora, I want them to learn more about who they are and where they come from. I want them to feel proud about their language and culture, and to learn about a hero that shares their roots, one who was not ashamed of where she came from. I would like for Black and African-descended children to see themselves positively reflected on the page, to a see a hero that they can look up to. As a Canadian author, I am happy to be writing a diverse book and getting it published in this country, as I know that there is a lack of these books by #ownvoices authors. I want Jamaican and Caribbean people to see themselves in this book and portrayed in a positive light. I want everyone to understand and appreciate the process of coming to voice. I also think that these are all universals for children who come from marginalized communities.

For everyone else, I want them to understand Jamaican culture more. Reggae is one of the most popular genres of music globally. This tiny island has gained popularity and influenced people around the world through this music genre—which was largely influenced by Jamaica’s history, culture, struggle, and language. I also want girls and young people, especially Black, Indigenous, and People of Colour, to see themselves as having a voice and that people want to hear what they have to say. If there is resistance, to still believe in themselves.

I want people to understand the contributions of Louise Bennett Coverley. There is not a lot of information published about her upbringing and contribution to Jamaican culture. I hope this book will help renew an interest in her work.

This book did not at all look the same in the end as I originally envisioned it. It went through dramatic changes. Originally, I wrote the story completely in patois, in a poetry rhyming style similar to Miss Lou’s. The challenge was that Jamaican patois is very much a spoken language, and it was difficult for a non-native speaker to read it when it was written. If you are not Caribbean or Jamaican, if you have never heard Jamaican patois spoken, you would have had a difficult time understanding what is being said and stumbling over words. I had a hard time envisioning the illustrations (I am an aspiring illustrator and often I think about my picture books visually as I write them). I pictured artefacts and real life photos interspersed but was not sure if that would appeal to children. These would have made sense, but not for this book.

As I spent time in the Miss Lou archives at McMaster University in Hamilton, took some time away from the text, spoke with people who knew her, and watched her videos, a narrative began to emerge. I am not even sure exactly when this happened. Perhaps I can attribute this partially to watching a few of her interviews. Louise Bennett constantly referred to an experience she had on a tramcar. Gradually, I learned more specific details of her life and read a few Jamaican Gleaner articles. However, being that there is not a lot of biographical information published about her in books, I was able to “flesh out” her story. The storytelling, workshopping, first-page pitches, and critiquing came in and I filled in the details. The nature and backdrop of Jamaica was also a wonderful muse. Some of the original patois and Jamaican folk songs are still in the book, but now they are framed in the context of a story told in standard English. The patois words appear in the book’s illustrations, by Eugenie Fernandes, too. I quickened my pace in 2017 when I learned that it was Louise Bennett’s 100th anniversary in 2019. It took seven and a half years from writing this book for an assignment to the physical copy.

Yes, I feel that there are misconceptions about writing for young people. Some people think that it is easy or “just a picture book,” trivializing what children’s book authors do. Others think that if they don’t have children, there will be nothing in these books that will interest them. What about bestsellers like Harry Potter, The Hunger Games, and The Hate U Give? Books for young people can be quite complex. I also think many people do not treat writing for young people with the same level of respect as other genres. They think the whole process is easy, or that anyone can do it.

I wish for people to know that writing for young people is gratifying and my first choice as an author. I do have other books up my sleeve but some of the main reasons I write are to inspire, educate, and entertain young people. Nothing is more gratifying than to share these stories with young people and see the delight on their faces while sneaking in the empathy and teachable moments. Writing for young people takes as much grit and passion as it does to write for adults. You also really need to know your audience. What do young people like?  How do they see the world? What we do is not “cute” and not “everyone can do it.”

How would you describe the writing community in Canada in terms of authors writing for young people? What strengths and weaknesses do you observe within the community?

I describe the writing community in Canada, or the authors writing for young people, as very welcoming. I find the ego factor is low and people are generally very willing to share information, advice, feedback, and experiences. Although it took me a while (I had a lot of imposter syndrome going on) to feel like I belonged, I started to use my voice more. I have become an advocate for diversity in children’s and young adult literature. In the “who’s who” in children’s books in Canada, I do not see a lot of diversity. This lack of diversity, I think, is one of its biggest weaknesses. We need to have diversity at all levels of the publishing industry. In the meantime, we have to be very responsible about the books we put out there—do research, get sensitivity readers, honour #ownvoices authors, mentor more diverse writers and publishing professionals, and create more pathways to publication. Another weakness I see is how economics can be a prohibitive factor for many to write and work in publishing—from unpaid internships to low annual incomes for writers. As a result, the writing profession becomes somewhat elitist. So, if you don’t have a benefactor, earning supportive spouse, inheritance, grant, wealth, or second/third job, you cannot afford to write. It shouldn’t be that way.

I am currently editing and revising one of my three novel manuscripts. This one is a contemporary young adult novel set in my community in Toronto. I am also working on the other novels to some degree, picture books, and a play.

Nadia L. Hohn is a classroom teacher, presenter, and award-winning author of the picture books Malaika’s Costume and Malaika's Winter Carnival. Named by CBC as one of the top Black Canadian Writers to Watch in 2018, Nadia holds degrees from the University of Waterloo and OISE. She lives in Toronto, Ontario.

Jamaican poet and entertainer Louise Bennett Coverley, better known as “Miss Lou,” played an instrumental role in popularizing Jamaican patois internationally. Through her art, Miss Lou helped pave the way for other poets and singers, like Bob Marley, to use patois in their work.
This picture book biography tells the story of Miss Lou’s early years, when she was a young girl who loved poetry but felt caught between writing “lines of words like tight cornrows” or words that beat “in time with her heart.” Despite criticism from one teacher, Louise finds a way to weave the influence of the music, voices, and rhythms of her surroundings into her poems.
A vibrant, colorful, and immersive look at an important figure in Jamaica’s cultural history, this is also a universal story of a child finding and trusting her own voice. End matter includes a glossary of Jamaican patois terms, a note about the author’s “own voice” perspective, and a brief biography of Miss Lou and her connection to Canada, where she spent 20 years of her life.