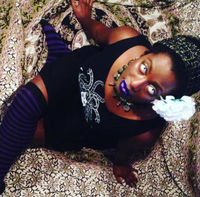 Yume (Rare Machines/Dundurn Press), the debut novel from Sifton Tracey Anipare, follows Cybelle, a young woman teaching in a Japanese city. Her love for her adopted culture is apparent, motivating her to stay even in the face of discrimination and at times, danger. But there's more to the city than even discovery-hungry Cybelle knows; a crucial line, which divides the spirit world of the yokai and the quotidian world Cybelle lives in, is beginning to weaken and flicker.

When she is caught up in a deadly conflict between spirits, Cybelle not only has to race to find out how to survive but to discover for certain what is real. A rollicking, fresh fantasy packed with rich, lovingly detailed worldbuilding, Yume is a unique and deliciously creative, tightly written debut, and further evidence of the ability of Dundurn Press' new Rare Machines imprint to find undiscovered gems.

We're extremely excited to welcome Sifton as our February 2022 writer-in-residence. She'll be sharing her voice on our writer-in-residence page throughout the coming month, and you can get to know her here today as she takes on our Dirty Dozen challenge, which asks writers to share 12 unexpected facts about themselves.

She more than meets the challenge (doing so with wit and charm to boot), as she tells us about an unexpected celebrity interaction, names the iconic fictional character she counts as an important influence (90s kids will approve), and makes us very keen to take a peek at her Pinterest boards.

(This content contains a very mild spoiler for the movie Parasite)

1. My Myers-Brigg personality type is INFJ.

2. If I was a cake ingredient, I think I’d be rum – many might flinch at the idea of it and say it doesn’t belong, but more people like it than one might assume.

3. My best celebrity interaction has to be the time Henry Winkler snuck up on me and pinched my elbow. (Long story)

4. When I can’t find anything to watch, I’ll usually put on a random CoryxKenshin or Corpse Husband video on YouTube, but I recently found a way to finish Don’t Trust the B— in Apartment 23, so that’s my new go-to. Sometimes I’ll put on Only Lovers Left Alive or Star Wars for background ambience. It depends on my mood and whether I’m multitasking or relaxing.

5. I have many odd quirks, and I’m sure I have several that I haven’t realized are odd yet, but the one I’m most aware of is how before I eat something big, I will cut it all up at once instead of cutting as I eat – e.g. a stack of pancakes or French toast, or steak. Or if it’s a massive burger, I’ll cut it in half first. I learned too late that it bewilders and even angers people (at least it did during my university residence years) but it makes giant things so much easier to deal with that I can’t break the habit. I also hate it when people ask me, “Can I ask you a question?” (I have several reasons, but they’re probably more of my odd quirks.)

6. I don’t know if I’d call it “silly”, but one of my biggest fears is the idea that there are things which might only exist in complete darkness. That, and the ocean. (What. Is. DOWN THERE ಠ_________ಠ)

7. When I was a kid, I thought the best thing about being a grown-up would be how I wouldn’t have to ask anyone to buy me the newest video game systems anymore. *hugs her Nintendo Switch*

8. Not going to lie: besides my parents, the one person who taught me the most about life was Xena: Warrior Princess.

9. When I’m with people I’m comfortable with, I’ll relax, joke around, make conversation…you know, usual “friend” behaviour. When I’m with acquaintances or strangers, it’s a miracle if I can manage full sentences. (Let’s just say I have a Pinterest board titled “Things to Make You Look Like You’re Texting in Public” – spoiler alert: 90% of it is just pins of Adam Driver or Lee Pace being awesome. I haven’t updated it since the pandemic started. I am open to suggestions.)

11. The last movie I saw in theatre was Parasite. I loved it, but now I look at indulging in birthday cake VERY differently.

12. I used to have a Simpsons quote for any situation, but I’m currently at least five seasons behind, so now I have a reaction gif for any situation. And yes, several of those gifs are from The Simpsons.

Sifton Tracey Anipare is a Ghanaian Canadian writer who lived and taught in Japan for four years. She loves video games, bubble tea, and Japanese coffee mixes, and is an avid collector of stickers and stamps. Yume is her first novel.

A captivating fantasy novel about demons, dreams, and a young woman teaching English in Japan.
“With empathetic characters, terrifying monsters, and a cinematic feel, Yume is a dream that will keep readers awake at night.” — RICHARD FORD BURLEY, author of Displacement
Cybelle teaches English in a small city in Japan. Her contract is up for renewal, her mother is begging her to come back to Canada, and she is not sure where she belongs anymore. She faces ostracism and fear daily, but she loves her job, despite its increasing difficulties. She vows to do her best — even when her sleep, appetite, and life in general start to get weird, and conforming to the rules that once helped her becomes a struggle.
Meanwhile, yokai feast and cavort around Osaka and Kyoto as the barrier between their world and the human world thins. Zaniel spends his nights walking the dream world and serving his demon “bodyguard,” Akki. But there is a new yokai on the scene, and it has gotten on Akki’s bad side. When Cybelle gets caught up in the supernatural clash, she has to figure out what is real and, more importantly, what she really wants … before her life spirals out of control altogether.