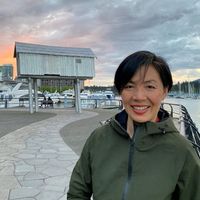 Why are we still so uptight about boobs? Long after Canadian women won the right by precedent (if not technically by law) to be topless in public anywhere men can be, we've still got debates raging about breasts. Enter Nancy Vo's cheeky new book, Boobies (Groundwood Books), a celebration of all things boob.

With wit and charm, Vo walks young readers through the reality of breasts – how all mammals have them, how they feed babies, how they vary from person to person, how they change over time, and even the different numbers of breasts different species sport. Diving into art, history, and science while keeping her tone light and her artwork fresh and so cute you'll want to tape it up on the wall, Vo's book is a breath of fresh air and a great non-judgmental, fun way to help our youngest readers understand and love bodies of all kinds.

We're speaking with Nancy today about Boobies, and she tells us how the idea for the book emerged from a shocking diagnosis, how long work to be comfortable with bodies led her to become "pretty much the household nudist" in her home, and how a complete overhaul of the original illustration style unlocked the right tone and feel for the book. 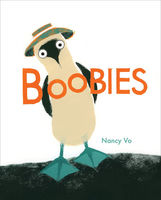 The short answer is that Boobies started out as a dare.

I hesitate to give the long answer, yet don’t want to give the impression of withholding information from my readers. Let’s preface this with, I was not good at handling some of the feelings extended to me when I first broke the news. And I’m not looking for a pity party.

Boobies started with a breast cancer diagnosis, which quickly degenerated into me random googling about breasts, boobies, et cetera. My doctor said please don’t google random things on the internet, and promptly scribbled down a URL to a reputable cancer agency. I followed her advice for half a day and found it too depressing and boring. Back to random googling. The information was piling up! I shared some of these findings with my writing partner who also has a similarly dark sense of humour. Somewhere in there I accepted a dare to make a picture book. The first image I scribbled at work on a post-it note (thank you, RPG Inc) was a badly drawn blue-footed booby bird (Sula nebouxii) wearing a bra. That was how Boobies came to be.

I realized very early during the “research” for the book that, in North America, we are not so great at talking about our bodies. I mean why else would we have so many slang words for breasts? It is also true in my own upbringing that my family did not talk about or expose our bodies. I didn’t even have the Chinese word for breast cancer to tell my mother the diagnosis. Luckily, she is a tailor, so I knew the word for bra! Anyway, I am now the exact opposite in raising my own kids. I’m pretty much the household nudist. I’m not advocating for that, but I do want kids to not be ashamed of their bodies and their body parts. Boobies is a celebration of two of our glorious parts.

Not at all. I started the illustrations using watercolour and pen, similar to the media that was used for my first two books, The Outlaw and The Ranger. I made an entire dummy this way and it’s only in hindsight that I see how weird it looks – realistic in a creepy way. The feedback in the rejection letters was that Boobies was either 1) a topic they did not want to touch, or 2) the style of the art was unappealing. So when I was in Calgary over Christmas, I decided to try a new technique using matte acrylics and stencils. Somehow, this was the answer. The stencils forced me to simplify the images into block shapes. The look of the illustrations suddenly looked more comical and less weird. It was the tone that Boobies needed.

The most important thing for me in writing for young readers is that you never patronize or hide things from them. If you need to deal with a tough topic, you can always, always find a way to do it respectfully. With picture books specifically, there needs to be a great interplay between words and images; if you took away one, the story would not work anymore. As for great kids’ books, it’s almost not fair to pick only two books because there are many more on my list. Recent favourites however are Sydney Smith’s, Small in the City, and Jason Reynolds and Jason Griffin’s, Ain’t Burned All the Bright.

I am terrible at this aspect of interacting. I could definitely learn a thing or two from authors who do social media well. However, there’s a good story about my interaction with the Glenn Gould Facebook Group. When I was illustrating the picture book, As Glenn as Can Be (written by Sarah Ellis), I would test out rough drawings by posting to the group. Members have very specific knowledge about their favourite Canadian icon. I knew I landed one image when within an hour of posting the sketch, someone identified Gould’s childhood home on 32 Southwood Drive and that the birds on the telephone wires represented the notes in the first two bars of the Aria in the Goldberg Variations. Bingo!

Book three of the Crow Stories trilogy, The Runaway.

Nancy Vo was born on the prairies and now lives in Vancouver, British Columbia. She studied fine arts and architecture, and now works as a facility planner and a picture-book maker. She is the author and illustrator of the first two books in the Crow Stories trilogy. The Outlaw was described by the New York Times as “Bewitching,” while The Ranger received a starred review from Kirkus and was praised as “visually arresting and enigmatic.” Nancy has also illustrated As Glenn as Can Be by Sarah Ellis.

A cheeky celebration of boobies!

“You have just opened a book about boobies.” Meet the Blue-footed Booby, who does not have any boobies at all, since only mammals have boobies. We learn that mammals have boobies to feed babies — even though milk can also come from plants. And did you know that boobies, or breasts, vary from person to person, that boobies change over time, and that different animals have different numbers of boobies? Witty and wide-ranging, this eye-opening picture book goes on to explore connections between boobies and mountains, boobies and ancient art and, of course, boobies and you!

Nancy Vo’s latest creation is fresh and funny, while serving up just the right amount of fact. Punchy prose is complemented by striking stencil art in a retro palette, making this the perfect gift for curious young children, older children getting to know their bodies, and anyone ready to boldly celebrate boobies!