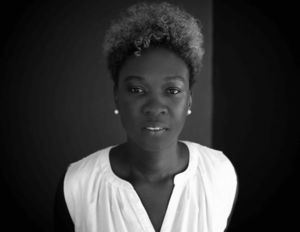 Poet Canisia Lubrin's much buzzed about debut Voodoo Hypothesis (Wolsak & Wynn) is a powerhouse of a collection. Lubrin is endlessly creative in pulling from science, pop culture, news stories, and more to create pieces that challenge insidious, constructed prejudices about black people.

Clever and playful, the poems give no quarter to religious and cultural assumptions and desires to control. Weaving together Caribbean Creole, English patois, and baroque language, she deconstructs colonial images of the so-called "other" and questions the process of othering so intrinsic to the west.

It's a collection that will be noticed, shared, and loved widely, and we are absolutely thrilled to announce that Canisia will be joining us here at Open Book as our writer-in-residence for October 2017.

To introduce her to our readers (though we know many of you know and love her already!), Canisia took our Lucky Seven interview questionnaire.

She tells us about how the fundamental nature of poetry resists easy answers, why the final book is quite different from the manuscript she originally submitted, and her thoughts on the idea of writer's block.

Stay tuned to Open book throughout October for essential reading from Canisia.

Voodoo Hypothesis is poetry that asks what is black life in the west. This may be a question with the most obvious answer for the hyper-politically and hyper-historically and hyper-socially aware. In contrast, I mine language for things that can illuminate the realities of simply being alive today, mostly, through the lenses of science, fake-science, popular culture, religion (and those histories) while avoiding the simplifying scaffolds in which human conduct is increasingly understood. I hold others and myself up against those systems, beliefs, and values, which are obviously part the clandestine cosmos, but I am very interested in language and its potential to do things that are—on account of mystery—actual and physical in the world. So, I wrote this book while reacting and confronting and mourning and celebrating and observing many of the things contained in it.

I think that poetry has a fundamental nature that maybe resists answers in favour of vast possibility. So, while there is in my book a central question (why is othering so deeply embedded in Western mythology and why is living while black in this mythology constantly subjected to a violence of inferiority)—I did not really set out to answer this question. I don’t think that the question emerged from the writing process but from this business of being alive and responding to what is happening in the world. So the poems that were initially accepted for publication were mostly all replaced by the new poems that I wrote in the last two years as thematic and structural considerations became clearer. This clarity is the result of the poems all yielding and unfolding as being part of the world’s working on my mind.

The manuscript I submitted for publication is quite different from the final book. I had had a brief conversation with publisher and editor, Paul Vermeersch, at a book launch in the spring of 2015, which led to me sending off a vaguely realized manuscript. This was the accumulation of four years of writing poetry which represented whatever I found I could write about: my interests are many. I was not, in fact, in a poetry headspace at that time, having just completed my MFA in long fiction. But I will tell you that I was frightened sending in what I did. Imagine my surprise when Paul informed me that he’d like to publish the book. That I’d have to wait to two years to see it done was no big deal. I had waited more than a decade for much less. But Paul encouraged me to write new poems. The dramatic shift that occurred in that was in realizing the central attention of the book while systemic and other abuses against people of colour was increasingly propagated through the media. It was, all of it, impossible to ignore and, of course, made for what is now Voodoo Hypothesis.

Teas and candles are lovely. If I can have the comfort of gooseberry jam (Caribbean style) and some fresh fruit, especially mango, I’m golden. I need to find the words, and, in the case of poetry, to be ready and available to listen intently for what the words bring as they come.

I wrote Voodoo Hypothesis mostly at night—when my family is at its quietest. I cannot say that I’ve ever experienced what people call writer’s block because I lost all fidelity to perfectionism when I was a child (it’s a long story). Yet, I know all too well when the work is not yet right. I tend to remind myself that there is an illusory work and an actual work and as long as I can moor and unmoor from the space between the two points, I can stay confident in the work. But, above all, writing is a thing I love. It is my Achilles heel. It is my joy. It is my mischievous best friend when I am alone. Other than that, give me the world.

If a book can usher me into an alien/mysterious encounter with things—whether those things are familiar or unfamiliar to me; if a book can make and let me be vulnerable, including my awareness that I am entering a world that has been constructed by someone for what gathers to the sum of a reader’s enjoyment (for me this is something that is usually an amalgam of emotional, intellectual and physical living); if a book can take me through a spectrum of human emotions—if a book can do all of this and still be equal measures myth and real: that’s a great book for me on any day. Dionne Brand writes great books and if I must choose among her poetry titles, I’d say Inventory moved me so profoundly that I still struggle to explain exactly how it changed me, though I know it did. More great recent poetry books: Tell: Poems for a Girlhood by Soraya Peerbaye, And I Alone Escaped to Tell You by Sylvia D. Hamilton, Cannibal by Safiya Sinclair. Simone Schwarz-Bart’s The Bridge of Beyond is my most recently read truly great novel. Anyone should be so lucky to experience the kind of spellbinding prose that Schwarz-Bart deploys, seemingly without effort.  Hers is a dark tale but she takes mystery, joy and love into one of the darkest recesses of the French Caribbean—and lets imagination illuminate the legacy of slavery there with a searing brilliance. Great books demand listening, sometimes deep listening and that listening is part of the ultimate magic of their effect.

I am editing my first novel and intermittently writing short stories. Of course, more poems: these, I write as they come.

Voodoo Hypothesisis a subversion of the imperial construct of "blackness" and a rejection of the contemporary and historical systems that paint black people as inferior, through constant parallel representations of "evil" and "savagery." Pulling from pop culture, science, pseudo-science and contemporary news stories about race, Lubrin asks: What happens if the systems of belief that give science, religion and culture their importance were actually applied to the contemporary "black experience"? With its irreverence toward colonialism, and the related obsession with post-colonialism and anti-colonialism, and her wide-ranging lines, deftly touched with an intermingling of Caribbean Creole, English patois and baroque language, Lubrin has created a book that holds up a torch to the narratives of the ruling class, and shows us the restorative possibilities that exist in language itself.