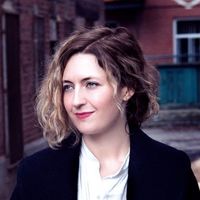 Erin Robinsong's debut collection Rag Cosmology (BookThug) is an arrival - of a literary talent, a unique point of view, and an insightful connection between the ecological and the personal.

Bringing together a deep love for nature and language with the current atmosphere of ecological anxiety, Rag Cosmology eschews fatalism and finds the beauty in one of our most formative relationships - that of the individual and the natural world. These powerful poems have been called "spellbinding" (Ruth Ozeki), and the collection hailed as "long-desired" (angela rawlings).

Today we are talking to Erin about her thoughtful and moving collection. She tells us about what the titular "rag" means to her (and manages to make rags sound downright beautiful), discusses the relationship between the city and nature, and tells us where readers can catch her in person at upcoming events.

Tell us a little about your title, Rag Cosmology, and how you arrived at it.

It’s a book that is really thinking about this ragged time. Rags are what we’ve got – the ecological fabric is pretty threadbare. I used to get so fixated on this in a doomful way – and still do – but more I’m thinking about what to do with these rags and holes, both in terms of acts of repair, and also as a record and a rhetorical and perceptual style. Not to push the metaphor too far – but a rag is useful. It’s also a word for sensationalist journalism, in the tabloid sense – a rag. Alien takeover and celebrity break ups are so dull in comparison to the outrageous, lascivious, too weird to be true nature of the ‘mundane’ world we actually inhabit, of violescent sea whips, semi-aggressive flower animals  (reef dwellers) not to mention the way our own bodies are in constant very literal communication and exchange with the world, the cosmos, what we call ‘the environment.’

Cosmology of course refers the study of the world, the cosmos, as a whole. How the whole system fits together. My cosmology has nothing of the kind of divine geometric order of the 17th century cosmologies by people like Robert Fludd or Kepler, but it is a way that I have found to put my sense of fracturedness and majesty together, and to give theories to the communal question – what kind of intelligence are we part of? I’m enthralled by this weird, sexy, pulsating intimacy we share with the earth, and also deeply confused about what it means to be a person right now. How do we become less deadly? (to borrow Donna Haraway’s phrase)

Rag Cosmology feels especially relevant right now as progress seems be faltering on ecological protections and concerns. When did you start this project and do you feel more or less concerned about ecological issues now?

The book that is Rag Cosmology grew out of an earlier manuscript I started maybe 10 years ago. Both projects were thinking about ecological harm, but the mode of my thinking changed so much in that time that I essentially wrote a new book, so most of the poems in the book now are very fresh – written in the last year or two. The poems themselves are much less grim – or not grim at all – even though I am more concerned than I have ever been about issues like climate change, ocean acidification, and the health of water, air and food security – but who isn’t?

I realized in writing through ecological alarm and grief that while poetry seemed to be a pretty ineffectual tool against what is happening, it could be a place for a wider and also more intimate kind of thinking.

I often come back to Lawrence Buell’s observation that the environmental crisis is also a crisis of the imagination. Then the obvious panic and rage and depression, while there, seems like a cheap reaction, and what might actually be useful is deeper imaginative work about what is happening and what we mean by ‘the environment’. We’re in the midst of a slow, world-altering violence that, as Donna Haraway puts it, is both too big a story, and not big enough. And this violence is occasioned by the story we have been telling ourselves about the rights of people in relation to this thing we call nature, and the implicit separation of the two. The limits, the sheer falsity of that story are becoming very obvious, at the same time as we’re coming to understand more and more about how ecology works – things like plant intelligence, mycelial networks that connect trees underground in an ancient sort of ‘internet’, how ocean health is related to terrestrial health, or my latest favourite – how dolphins get high!

So we have more and more understanding of the kind of intelligence we’re part of, at the same moment as it’s being exterminated by, of all things, something as lacklustre as corporate profit. And by ‘it’ I do mean ourselves as much as the wild bees, because there really is no border between us and them, us and nature, us and the world. That’s what ecology is – interrelations. There are no separate selves, no individuals; they do not exist. All there is is interaction and relation.

So while I refuse to believe something as comparatively dull as corporate mechanisms will have the final say, it does not look good, obviously worsened by Trump’s insane crusade to expand pipelines, give coal a comeback, rip up the Paris Agreement, and generally make the world more unsafe and afraid than it already is. But perhaps in making the problem worse, we’ll have to get more decisive and intelligent.

As a city dweller, how do you find yourself connecting to the natural world in the intimate way these poems convey? Is that connection part of your writing process in any way?

I think cities exist in the natural world as much as forests do. I grew up on a small island, six hours from the nearest city, and two ferries from the nearest town, but it was only when I moved to the city to go to university that I really started to become aware of ‘nature.’ It’s hard to describe, but I remember feeling the pull of the earth through the floorboards of my third floor apartment. In retrospect, maybe I was just noticing gravity for the first time – because everything was new.

But because I am from such a rural place, it was totally exotic to encounter sidewalks and urban outfitters, and also massive deciduous trees pulling all this green and cool and shelter and personality right out of the sidewalk. I think in an urban environment, there is the potential to notice trees and gardens and gravity and weather and wildlife and water more closely, perhaps because they are against a more static backdrop. But concrete is flowing too! So to answer your question, yes connecting to the natural world is part of my process very much, and mostly that just means paying attention – to surroundings, to the way things move, sensations… I also go home every summer to Cortes Island, and though I don’t really write there, being in the woods and the ocean and the dark nights restores me in a way that nothing else can. But then so does the city, in a different way. Not that they are comparable kinds of habitats – one is clearly dependent on the other.

I don’t have typical writing days so much as periods and pockets of time where I work in different ways depending on what else is happening and where I am. The most intensive periods of this book were written in Banff during a residency, at home in Toronto and Montreal, and in London, UK, in the reading room at the Wellcome Centre where I finished the book.

When I’m at home and can, I find the best rhythm when I work in the mornings, which means getting up early to read, move about, and write til about 1. If I can do this before working, before email, before meeting anyone then I have so much more energy for everything else, but I’ve found the reverse is not true! Even though I am the opposite of a morning person, mornings have a very particular energy that I love.

But my most productive, voluminous, revelatory writing times seem to happen when I can just be in writing brain all day, every day, and work from morning til night and then dream about it – I think I’m more of a long-distance runner in that way – I like to get lost in it, and not have to come up for air, or responsibility, and residencies are amazing for this because you can just live in it and everyone around you is doing the same. I’ve done this at Banff, Spain, Tofino, and also sometimes do this at home – where I don’t see anyone, stock up on groceries, and follow a thought for as long as I can.

Most immediate are readings and launches for Rag Cosmology. The BookThug launch was on April 13 at the Garrison in Toronto, then I have a launch at Skybarn in Prince Edward County, and in Montreal I’m launching with the amazing Aisha Sasha John and her new book I have to live. We’ll be joined by dancers who are creating performances for the night! I’m also reading at Pivot in Toronto and Resonance in Montreal, and then in Dublin and Cambridge in July, and BC in August.

Apart from that, there’s a little pause after a few years of being too busy, so besides write, which I always do, I’m thinking about starting a business that sells ephemeral things with my friend and longtime collaborator Andréa de Keijzer. For years we have made performance together – most recently Facing away from that which is coming that showed at Tangente Danse in March and This ritual is not an accident, a performance that looks at the slow-motion accident of climate change. We may show or tour these again soon, but for our next project we wondered what if we applied the skills we use in making performance – all manner of figuring and problem solving and intuiting and making and grant writing – to a different medium? I’m the furthest thing from business minded but in that way I think it could be an amazing art project that is also real. But mostly I just want to write, and I’m also doing a collaboration with British poet Florence Uniacke for a manuscript of hers which I find incredibly exciting.

Erin Robinsong is a poet and interdisciplinary artist. Her work has appeared in numerous Canadian journals and anthologies, and onstage at the &NOW Festival of New Writing, The Conference on Ecopoetics, Tangente Danse and others. With longtime collaborator Andréa de Keijzer, she is featured in Mike Hoolboom’s film We Make Couples, a Marxist love story. Erin has an MFA from the University of Guelph, is a recipient of the Irving Layton Award for Poetry, and has been nominated for a KM Hunter Award. She has driven horse carriages, sold knives, restored books for a living, and is currently a teacher and editor. Originally from Cortes Island, Erin lives in Toronto & Montréal. Rag Cosmology is her debut collection.

The ecological is personal; the personal is ecological. Rag Cosmology is a pulsating meditation on this most intimate relationship. These poems inject pleasure deep into the tissues of our language and state, countering fatalist narratives with the intimacy of entanglement and engagement.

two weeks ago I arrived here

simply to shake in the green plosions