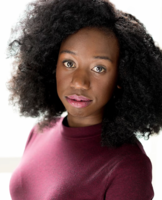 It's a gutting image: a seventeen-year old Black boy, a child in a hoodie, dead far too soon because of hateful and unchecked anti-Black racism. Makambe K Simamba's Our Fathers, Sons, Lovers and Little Brothers (Playwrights Canada Press) opens on Slimm just moments after he arrives in the afterlife. Alone, and with no one answering his calls, he embarks on a journey of bravery and discovery.

Celebrating Black life and strength and acting as a loving epitaph for the countless Black men and boys violently taken from their families, Our Fathers, Sons, Lovers and Little Brothers is a tour de force from an insightful and memorable playwright.

We're thrilled to welcome Makambe to Open Book to discuss her evolution as a playwright as part of our On Stage interview series. She tells us about the iconic American play that was one of her first introductions to the idea of exploring the "complications of human existence" on stage, the excellent advice that she gives herself when difficulties crop up in the writing process (fellow writers will want to repeat this to themselves!), and both the best and worst things about being a playwright.

“Because it is my name! Because I cannot have another in my life! Because I lie and sign myself to lies! Because I am not worth the dust on the feet of them that hang! How may I live without my name? I have given you my soul; leave me my name!”
- John Proctor

Like many people who were educated in a North American school system, I first encountered The Crucible by Arthur Miller in a high school English class. I remember the ending scene so clearly. John Proctor is given the chance to falsely confess to practicing witchcraft (for those who don’t know the play, it is set in Salem in the 1600s, so they took the witchcraft thing real seriously) or hang. Just at the moment where we all think he might go ahead with the confession so that he can get his life back, he refuses to sign his name. Spoiler alert: John hangs.

I thought to myself, Dang, did he really let himself die over a signature?? At the same time, I felt for him as much as I felt for everyone who played a role in getting him to that point. It is then that I started to realize that compelling stories for me, are less about “good vs. evil” or “right vs. wrong” but rather about the complications of human existence; the layered reasons why people do the things they do, playing out as how far characters are willing to go in order to live their truths.

It would be a few years until I would have the realization that the plays I read in English class were created to be performed, more so than read—so you can imagine my delight when I had the chance to see a production of The Crucible years later.

Shout out to Arthur Miller for making tenth-grade Makambe stop and say, “Whoa. I didn’t know a play could do that.”

Little did she know she was destined to make plays for a living.

When a play wants to be created, it sneaks through my bedroom window at night. It knocks softly on a little door in my mind and quietly lets itself in. If upon waking up, I ask this idea to stay, it then starts to tell me how it wants to be created... and that’s where the fun begins.

Sometimes, an idea asks me to grab the closest pen and piece of paper immediately and simply allow it to dictate. Other times, it offers me a repetitive image to wrestle with, asking me to mine characters, settings, dialogue, etc., from that visceral starting place. Occasionally, an idea offers me the impulse to move, or dance. Some ideas have also asked me to travel far from home, to explore, to wiggle my toes in the grass, to interview people, to investigate. In the writing process of Our Fathers, Sons, Lovers and Little Brothers, the idea asked me to do all of the above. I try my best to listen to these prompts. I’m often surprised, but never regretful about where they lead me.

It took me a while to realize it, but I think everything I’ve ever written has something to do with ancestry—the connections we have with those who come before us, and the things we will pass down to those who’ll come after us.

Maybe the idea in my head isn’t quite ready to give me the next piece of the puzzle yet, or maybe I’m just not in the energy to receive it. It happens.

What I’ve been finding useful of late is to ask a really specific question, ie “Why is Character X afraid to go back to their childhood home?” or “What’s the significance of the apple tree in Scene 4?” Then I’ll leave it alone for a while.

Once I’ve given it a bit of space and have distracted myself, answers often show up.
This particular process takes a lot of trust and patience, which I’m better at some days rather than others, but I love the magic it’s led me to thus far.

What was the last play that you saw or read that really knocked your socks off?

The Worst: Imagining entire worlds in your head, and then somehow getting them on paper.

The Best: Imagining entire worlds in your head, and then somehow getting them on paper.

Makambe K Simamba is a Dora Award–winning playwright and actor for Our Fathers, Sons, Lovers and Little Brothers. Other plays include A Chitenge Story, The Drum Major Instinct Trilogy, Makambe Speaks, and MUD. Select acting credits include A Chitenge Story, inVISIBLE, GIANT, Bea, Winners and Losers, and SIA. She is the 2020/2021 Urjo Kareda Artist-in-Residence at Tarragon Theatre. She recently co-directed inVISIBLE (Too) at the University of Lethbridge and is a resident member of the artist-run theatre company ARC. Makambe is proudly Zambian, and her intention is to be of service to her community through her ability to tell stories. She is based between Calgary and Toronto.

Slimm, a seventeen-year-old Black boy in a hoodie suddenly finds himself in the first moments of his afterlife. He calls out for God. God does not respond. What happens next is a sacred journey through the unknown, as Slimm grapples with the truth of the life he lived and the death he didn’t choose.

Our Fathers, Sons, Lovers and Little Brothers is a protest for all Black life beyond headlines and hashtags, a prayer for all families left behind, and a promise to the community that all Black lives matter.