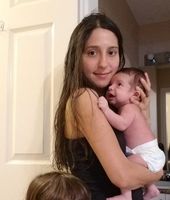 Rahela Nayebzadah's darkly magical new novel, Monster Child (Wolsak & Wynn), mixes the fantastical with the grimly real as siblings Beh, Shabnam, and Alif navigate a new world together. The children and their parents are Afghan immigrants attempting to make their way in a new country, settling into life in British Columbia, where they are greeted with suspicion and racism.

Finding their ways in a strange new society, locating halal meat, and cleaning their new house (a former grow op) fills their days until an act of violence threatens to tear the family apart. Anchored by memorable, vibrant first-person storytelling, Monster Child is a tour de force of creativity, spinning the tale of a family defined by both tragedy and resilience.

We're excited to welcome Rahela to Open Book today to take on our Dirty Dozen challenge, where we ask writers to share 12 unexpected facts about themselves so readers can get to know them on a person level. Rahela tells us about the narrow-minded advice she's been given about her name, the filmmaker whose writing always inspires her, and the impressive nickname she earned as a child.

The Dirty Dozen with Rahela Nayebzadah

A mother of two, Rahela Nayebzadah holds a PhD in the Faculty of Education from the University of British Columbia. Currently, she is a schoolteacher. Her autobiographical novel, Jeegareh Ma (2012), was based on her family's migration to Canada from Afghanistan.

In a powerful debut novel author Rahela Nayebzadah introduces three unforgettable characters, Beh, Shabnam, and Alif. In a world swirling with secrets, racism and a touch of magic we watch through the eyes of these three children as Nayebzadah's family of Afghan immigrants try to find their way in an often uncaring society. But as a sexual assault on thirteen-year-old Beh unleashes the past and destroys the family the reader is left wondering who is the monster child? Is it Beh, who says she is called a disease? Is it Shabnam, who cries tears of blood? Is it Alif, who in the end declares "We are a family of monsters"? Or are the monsters all around us?