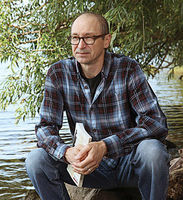 What does the word treaty mean? Deceptively simple, it's a word with great weight and Armand Garnet Ruffo spreads the word and its meaning open in his powerful new poetry collection Treaty# (Wolsak & Wynn).

Observational, wise, and diamond-sharp, the poems investigate relationships both personal and macro, from individual connections to the titular Indigenous treaties in Canada. Writing over the past with its misrepresentations and inaccuracies, Ruffo imagines new ways to bear witness and communicate, all while maintaining a deep link to what has come before.

Original, important, and arresting, it's a collection that will deeply impact readers, and we are incredibly proud to present an exclusive excerpt from Treaty# here today courtesy of Wolsak & Wynn. In three poems, selected by Ruffo, we get glimpse of this exciting new work.

On the Day the World Begins Again

On the day the world begins again
will it be the strongest animal
the swiftest bird
or the tiniest insect
that carries the news to humankind
announces rebirth in a roar
in a squeak or maybe in silence?

On the day the world begins again
will luminous light
rise from parting clouds
in unquestionable power
and refract a miraculous prism of colour
while the tallest white pine announces peace
in a sprinkling of communion?

On the day the world begins again
will those suspended behind bars
in and between grey ugliness
in their deadened shouts of protest
float beyond their circle of cigarette burns
and crude tattoos
beyond their sharp cries of where
they are and wish they were?

Substratum of living
room conversation
pleasant company
books and a fireplace,
safe and almost in
the affairs of the day:
gender, war, politics,
reconciliation, tv

a fractured shift
and a shadow jack pine
scrapes its perpetual
one-pitch note against
a single-pane window
as a dinner plate zings
and shatters, a white
towel soaks up blood,
and what was that?

another shift of head
and our gracious host
stands before us
announcing it’s time,
everyone rising on cue
like the sumptuous aroma
into a setting for six,
candles and fine china,
brimming anticipation

(1) In North America, since 1600 at least fifty-two Indigenous languages have become extinct while many others are threatened.

This excerpt is taken from Treat# copyright © 2019 by Armand Garnet Ruffo. Reproduced with permission from Wolsak & Wynn.

Armand Garnet Ruffo was born and raised in northern Ontario and draws upon his Ojibwe heritage for much of his writing. A multi-genre writer, he is the author of Grey Owl: The Mystery of Archie Belaney and Norval Morrisseau: Man Changing into Thunderbird, a finalist for the 2015 Governor General’s Literary Awards. His latest collection of poetry is The Thunderbird Poems. Other projects include “Sounding Thunder: The Song of Francis Pegahmagabow,” a musical drama that premiered in the summer of 2018, and “On the Day the World Begins Again,” a short film about Indigenous incarceration that will premiere in October 2018. His writing most recently appeared in ARC Poetry, GRANTA's Canada issue, EVENT and 150, Canada’s History in Poetry (Nimbus Publishing). Ruffo is the recipient of a Honourary Life Member Award from the League of Canadian Poets and an inaugural Mayor’s Arts Award from the City of Kingston. He is currently the Queen’s National Scholar in Indigenous Literature at Queen’s University in Kingston. He lives in Kingston, Ontario.

A treaty is a contract. A treaty is enduring. A treaty is an act of faith. A treaty at its best is justice. It is a document and an undertaking. It is connected to place, people and self. It is built on the past, but it also indicates how the future may unfold. Armand Garnet Ruffo’s TREATY#is all of these. In this far-ranging work, Ruffo documents his observations on life – and in the process, his own life – as he sets out to restructure relationships and address obligations nation-to-nation, human-to-human, human-to-nature. Now, he undertakes a new phase in its restoration. He has written his TREATY# like a palimpsest over past representations of Indigenous bodies and beliefs, built powerful connections to his predecessors, and discovered new ways to bear witness and build a place for them, and all of us, in his poems. This is a major new work from an important, original voice.