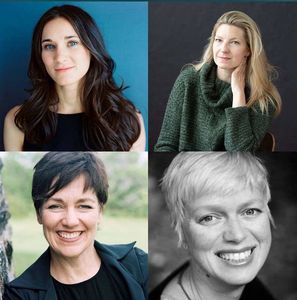 We're continuing our week-long spotlight on excerpts at Open Book, bringing you delicious free samples of some of the most exciting Canadian books out this year. Today we've got something special: our first-ever excerpt from a play, and what a play it is.

Anyone who follows Canadian theatre will know the name Hannah Moscovitch. The revolutionary theatre creator's latest offering, written with Maev Beaty and Ann-Marie Kerr and brought to life with their co-creator Marinda de Beer, is Secret Life of a Mother (Playwrights Canada Press), an incredible show that feels like eavesdropping on a deeply real, unflinchingly raw conversation between friends about motherhood, work, and life.

As our expectations, experiences, and perceptions of mothers and mothering change, Moscovitch et al push back against overlooked, over-polished, and over-simplified ideas around pregnancy, miscarriage, childbirth, and a mother's life.

Funny, painful, dark, loving, and formally creative with a "playwright within in the play" structure, Secret Life of a Mother goes beyond the idea of a mother as villain, angel, martyr, or drudge. We're extremely excited to present an excerpt here today courtesy of Playwrights Canada Press. 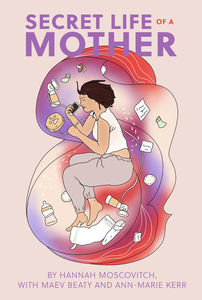 During the below section, Maev Performing Hannah sits close to the audience and remains very still:

Maev Performing Hannah: I lay Elijah in the middle of our bed. I go over to the closet and I put away some underwear. I’m unpacking our suitcases after a trip to Montreal. I’m still standing by the closet, tuned out, thinking about work, I don’t know for how long. I hear Elijah moving. I turn around and I see him slide down the side of the bed headfirst, catch for a moment on the frame, and then hit the floor. He’s only three months old.

I’m in Banff, working, and I let Elijah play in the sink. He fits right in it and seems happy. I have a feeling this is a bad idea, but I let him do it anyway because we’re in a hotel room in winter and there’s so little for a baby to do. While he’s playing in the sink, I lose focus. I think about other things. I hear him scream. I look down and he’s turned on the hot water tap.

Elijah and I are in the airport by ourselves. Christian is meeting us at home in Halifax with a station wagon load of our crap. I’ve opened a new play, then gone straight into a TV room for a week, then packed all our stuff up into the station wagon late into the night, and of course Elijah is still waking up two times a night for milk and I’ve only had three hours of sleep. Elijah cries and throws himself on the ground at the gate because he can’t understand that we have to wait to get on the flight and I carry him into the disabled-slash-family bathroom and I lock the door. I sit against the wall in the public bathroom and I watch Elijah unroll all the toilet paper. I call Christian. I tell him I am too tired to get on the flight with a baby by myself: I don’t know if I can get on the flight. I say coffee doesn’t work anymore. I say I am so tired I don’t know what will happen on this flight, that I feel like I don’t even like Elijah right now, that I feel physically angry at him like I want to hit him. I say all of this while Elijah is putting his hands into something wet on the floor that might either be spilled air freshener or urine.

And even if Maev plays me I’ll still be exposed.

Listen, I can work on myself, as a mother, but I feel fucked.

Banff only had standardized rooms, and they didn’t have cribs or any facilities, and I said yes to that gig, and that’s my workaholism, but I do have to take some gigs, and I let Elijah play in the sink because when I took him into the corridor and he made high-pitched sounds, I got hostile looks, and I know as a mother I have to hold my ground and if people are shitty about him being a baby, that’s their problem, but holy fuck, between taking Elijah on an airplane and having to eat in restaurants with him, because there’s no kitchen in my hotel room, I’m facing a lot of hostility. And he’s waking up at twelve a.m. and two a.m. and four a.m. for milk, and then I’m working all day as though I don’t have a baby, and then I am tuning out because I do that but also because on this little sleep it’s pretty hard to stay with it.

And—yeah—this whole mothering thing is such a racket, like, “Hey, be a mother, that’s super, just as long as you don’t expect us to set up any shit that would make being a mother feasible, and also, if you aren’t able to be a good mother in these fucked-up circumstances, well hey, fuck you.”

Maev would come over, sometimes, in the long summer we had together when Elijah was one and Esmé was three, at the Stratford Festival, working on a play together. And we’d be coming off of our different shit—Maev would’ve spent eleven hours in the ER with Esmé, who had diarrhea, trying to get her to drink Pedialyte while working to get her lines down, and I’d be being a mom and in rehearsal, jogging home on lunch breaks to nurse Elijah and making elaborate snacks for the nanny, as if to say, with my elaborate snacks, “Please fucking eat this snack so you can look after Elijah.” Maev and I would drink, and that meant a lot to me, not because we said meaningful things but because...

I’d admit to her that, say, when I was with Elijah, I went and hid along a forest trail so I could nurse him without getting my tits out in public, but it turned out it wasn’t a forest trail at all, it was the path from the parking lot to the theatre, and then whole busloads of fucking tourists traipsed by me and I was like... “Hey, so these are my tits, come see my show, it’s gonna be great. Enjoy your matinee!”

We’d talk about, you know, whatever was funny and terrible and happening.

And yeah, at some point Maev said to me, “Mothers make lives but they also make deaths,” and that... ! Stuck with me. And I admitted to Maev that I couldn’t stop thinking about it, because I was the one there picking Elijah up and holding him when he fell over, or when he was scared, and... I wasn’t going to be there for Elijah’s death—I mean hopefully!—and he’d die without me... there to... hold him, and it could be a bad death, he could be alone, and I... was... picturing it, and... I didn’t want it to happen that way, and what could I do about it? And Maev said, “Help him to know how to love people, so when he’s dying, someone’s there.”

Maev: Hi, so this is Maev, again, hi! I really want to tell you what I remember about those nights in Stratford, with Hannah. So the year before, Stratford had offered me three shows, and I was thrilled, because working at Stratford was my dream, but it meant I had to pull my family apart, single-parent Esmé for nine months while working more than eighty or ninety hours a week and nursing Esmé, and by the middle of the season I was... fucked. I-I was drinking and smoking and I was having dark thoughts, about getting fired. And I was failing, as a performer and a mother. And I felt so bad, so much shame, about having said yes, and wanting to work. That summer I told Hannah all about all that, all the shame I felt, and she said to me: “It’s who you are, the work and the mothering, and who you are is who you are. You are an art monster, that’s not something you choose to be, that’s who you are, and you don’t have to be ashamed.” And she set me free.

So Hannah wrote a text note here. It says, “Hey, this is weird but, guys, I have this picture in my mind of Maev floating or flying, so I’m writing it in here, just, you know, I don’t know, weird.”

Maev tries to get up on the chair for a second, then gives up on it. She goes off stage. Behind the black curtains, we hear sounds:

The curtain opens and Maev is flying.

Hannah Moscovitch is an acclaimed Canadian playwright, TV writer, and librettist whose work has been widely produced in Canada and around the world. Recent stage work includes Sexual Misconduct of the Middle Classes and Old Stock: A Refugee Love Story (co-created with Christian Barry and Ben Caplan). Hannah has been the recipient of numerous awards, including the Trillium Book Award, the Nova Scotia Masterworks Arts Award, the Scotsman Fringe First and the Herald Angel Awards at the Edinburgh Festival Fringe, and the prestigious Windham-Campbell Prize administered by Yale University. She has been nominated for the international Susan Smith Blackburn Prize, the Drama Desk Award, Canada’s Siminovitch Prize in Theatre, and the Governor General’s Literary Award. She is a playwright-in-residence at Tarragon Theatre in Toronto. She lives in Halifax.

Secret Life of a Mother

The raw and untold secrets of pregnancy, miscarriage, childbirth, and mothering are revealed in this true story of motherhood for the twenty-first century.

A playwright writes an exposé of modern motherhood full of her own darkly funny confessions and taboo-breaking truths. One of her real-life friends, an actress, performs the piece, and through it her own experiences of motherhood start to surface. These mothers are not the butts of jokes, the villains, or the perfect angels of a household.

This empowered and relatable play was written collaboratively between award-winning theatre artists Hannah Moscovitch, Maev Beaty, and Ann-Marie Kerr, with co-creator Marinda de Beer.  Uplifting and full of love, Secret Life of a Mother is a generous and powerful act of truth-telling for anyone who has thought about, been, loved, known—or come from—a mother.