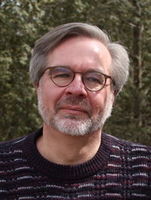 In 2018, Guernica Editions launched the inaugural Guernica Prize, an award for the best unpublished novel manuscript submitted, accepting applications from hopeful authors across the country. The jury read numerous manuscripts on multiple, timely themes, but there was one story that outshone the rest of the pack. That manuscript became K.R. Wilson's novel An Idea About My Dead Uncle (Guernica Editions), which tells the story of a young, mixed-raced composer who travels to China to search for his titular uncle.

A story of identity, family, perception, and, of course, music, Wilson's novel is a tale of healing through the creative process itself, set against a rich political and historical backdrop.

Juror and author Gabriella Goliger praised An Idea About My Dead Uncle, calling it "witty, sharp-edged [and] finely-crafted".

We're excited to present an exclusive excerpt from the novel, courtesy of Guernica Editions, here today. Get a glimpse of what the jury saw in this exciting new voice in CanLit.

Excerpt from An Idea About My Dead Uncle by K.R. Wilson: 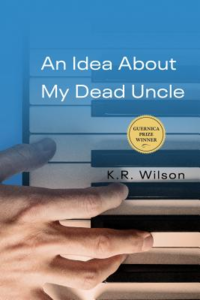 I have an idea. About my dead uncle.

Uncle Larry went to China when I was five and never came back. We don’t even know for sure that he’s dead. It’s a great story. Or would be, I imagine. If we actually knew what it was.

I just have bits so far: a made-up narrative arc for the second act, a melody half-cribbed from some incidental music that I wrote about five years ago for a local theatre company.  An ethereal harmonic progression that I’m sure I’ll find a place for. It wants to happen. It nags me in the night, sends me creeping to the kitchen table with a notepad or some music paper just to empty out my head so I can sleep.

Louisa never stirs, even if I’m up three or four times.

We pretty much assume that he’s dead, after twenty-five years. Or most of us do.

He isn’t even my uncle, really. He’s Mama’s cousin. Or was, if he’s dead. Aunt Jasmine believes he’s still alive, but then I guess a mother has to. If he is, though, you’d think he’d have contacted someone by now, no matter how hard it may have been to get letters out of China in the 70s. Or especially now, with the Internet. You’d think he’d have contacted Aunt Jasmine at least.

I used to sneak over to her place sometimes for tea and pastries, and the occasional family story. Stories from Mama’s side, that I wasn’t supposed to want to know about. She makes these great little pastries called moon cakes. Mama never made moon cakes. Mama was never allowed to make anything Chinese. There were a lot of rules for Mama.

I remember one day she was supposed to mow the lawn, but didn’t. When Dad got home she was asleep on the kitchen floor. I had cleaned up the spills and put the empties under the sink, but I couldn’t get her to wake up, to wash her face, to sit in a chair. I was probably six or seven. He twisted her arm up behind her back until she cried and pushed her out to the shed. She mowed the lawn one-handed, rocking the mower from side to side to turn it around at the end of each row. Her arm was in a sling for four days.

Oh, for a while we sometimes went out for Chinese food, but only the same way that we sometimes went out for steak or spaghetti. When we got to go out at all. There was a little place with chrome and arborite tables in a strip mall on Macleod Trail that served “Chinese and Canadian Cuisine”, the menu neatly segregated: egg rolls and chow mein on the left, burgers and club sandwiches on the right. I could always tell if Teresa was trying to suck up to Dad by which side she ordered from.

Dad always had the roast beef sandwich au jus. I can still see him turning his head sideways to bite into the gristly folds of meat, into the darkened bun dripping with what he always called “the awe juice”. Mama usually had coffee and rice.  Plain white rice. It wasn’t licenced, the Chinese food place. I was often the only one who ventured into the mysterious realms of chop suey and sweet and sour pork, or chicken balls in their sticky scarlet goo.  For a while.

But suppose he is still alive?

I’ve mentioned the opera-in-progress to a handful of my music acquaintances, but they just smile the way you smile at a five-year-old who says he’s going to be a fireman. The smiles are kind, but I see it all in their eyes. Waste of time and talent. No chance of it ever getting produced. Who besides Wagner writes their own libretto anyhow? Plus I think they’ve had me a little pigeonholed since last year when the CBC included Infernal Variations (String Trio), by Jason Lavoie on a CD of works by regional Asian-Canadian composers.

I’m Jason Lavoie, in case that wasn’t clear. La-voy, by the way, not La-vwa. Dad was always very insistent about that, and by now the habit is worked in too deep to get rid of, even though I get grief about it from people like Bill Bonenfant, the cellist from St. Albert who played on the recording. But that’s how it plays when you’ve been assimilated anglophones for multiple generations. Linguistic fidelity is fine for the folks in St. Albert, or in the towns south of the rail line in Saskatchewan, but here in Calgary it’s just considered snooty.

I have mixed feelings about even being on that disc. I hate playing the Asian card. I just want to be seen as a composer, not as some exotic sub-type. But hey, would you turn down a chance to be recorded?

It’s the part after he gets to China that’s troublesome, of course, especially since he probably spends about three-quarters of the opera there. There were only a few early letters, and no-one heard from him again once they stopped, so I pretty much have to make it all up. I have to base it on my general sense of him and on what I know about China, which is tricky, since he left when I was five and I know virtually nothing about China. So I’m mostly working on the music at this point.

I’m sitting at my keyboard—a Korg M1 I bought used about a year ago—trying to construct a quasi-heroic melody in the tenor range. I see Uncle Larry as a tenor, struggling for reform in the middle of a chorus of baritone bureaucrats. I have the headphones on to avoid disturbing Louisa, so I don’t hear her come in to bring me a coffee. She’s just suddenly there, reaching around me toward the side table where my manuscript paper is, and I twitch with surprise.

She sets the coffee down on a coaster and places a settling hand on my shoulder. She leans forward and peers at the manuscript. Across the top staff of a six-stave line are three bars of melody and about eight bars of eraser smudges. The other staves—intended for a three-part men’s chorus of bureaucrats and a piano score that I won’t orchestrate until later—are blank. At this point I have no idea who the bureaucrats are, or why they’re there, or what they have to say, or even if they’re historically accurate. I just like the image.

“What do you think of this?” I ask. I turn on the little amplifier that connects the Korg to the bookshelf speakers and play her the three bars of melody, half-singing along to illustrate that it’s a vocal line. It doesn’t seem like much for two hours’ work.

“Hmmm,” she says. She touches a knuckle to her lower lip. She’s not being evasive. She has a reasonable sense of modern music, especially after living with me for Jesus, is it really more than four years now?—and she’ll give me a real opinion. It’s probably just too small a sample to get much of a grip on.

“You have to imagine it kind of rising up above this chorus of bureaucrats,” I say, making a rising motion with my hand, fingers curled upward as if in struggle.

“Oka-a-ay,” she says, as if letting that notion sink in. “And what will the chorus sound like?”

I put my arm around her hips. She kisses the top of my head.

I remember Mama tapping the coffee scoop against the inside of the tin, to get it level before tipping it into the paper cone. I remember her hair, dead black in the living room sun, as she picked out tunes on the piano with one hand. Old MacDonald. Twinkle twinkle. Canadian tunes, they might have said, at the restaurant with the chrome tables. I remember moisture in the fold at the corner of her eye.

She didn’t drink every day, at least not then. Then it was only on the weekend, and sometimes not even until the afternoon. But it was enough, especially on the odd occasion when it spilled into pub lic view. Staggering down the front walk to the car. Overbalancing while reaching for the morning Albertan and tumbling down the front steps.

Mama sometimes said I had some special connection with Uncle Larry, but that she never understood what it was. I wonder now how much of that was bullshit.

The not understanding, I mean.

Excerpt from An Idea About My Dead Uncle by K.R. Wilson, copyright 2019. Reproduced with permission of Guernica Editions.

An Idea About My Dead Uncle

A young, mixed-race composer, raised without meaningful connections to his Chinese heritage and struggling with identity issues, travels to China in search of his long-missing uncle, an uncle who vanished in the aftermath of Tiananmen Square. An Idea About My Dead Uncle--winner of the inaugural Guernica Prize for the best unpublished novel manuscript--is about the identities we choose and the ones that are imposed on us. It is about being on the outside looking in. It is about dealing with pain through the artistic process. It is about delusion and healing. It is about the power of narrative. According to Gabriella Goliger, winner of the 2011 City of Ottawa Literary Award for Fiction for her novel Girl Unwrapped and a juror for the Guernica Literary Prize: A witty, sharp-edged, finely-crafted story about a young man struggling with identity issues, which causes relationship disasters and a quest for his long lost uncle in China. The introspective but straightforward narrative eventually plunges into the surreal, mirroring the madness that can result from an uncompromising search for self.