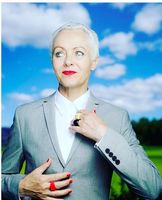 The spectacularly titled Because Venus Crossed an Alpine Violet on the Day that I Was Born (Book*hug Press) by Møna Hovring was a runaway hit in Norway, where it scooped major prizes including the Norwegian Critics' Prize for Literature. Now thanks to Book*hug and translator team Kari Dickson and Rachel Rankin, English language readers can enjoy the sharply rendered, compelling story of two sisters coming together after years apart.

Martha and Ella were raised practically as twins, but are virtually strangers by the time Ella agrees to accompany her sister to an isolated mountain hotel as she recovers from a mental health episode. Ella is hopeful for both Martha's recovery and a return to their childhood closeness, but when Martha disappears, everything changes.

A story of what we owe one another and ourselves, and how freedom and love interact with each other, Because Venus Crossed an Alpine Violet on the Day that I Was Born is a luminous story about connections both in and beyond the familial. We're proud to present an exclusive excerpt from the novel today, in which we meet Ella as she makes a monumental decision about her sister.

An excerpt from Because Venus Crossed an Alpine Violet on the Day that I Was Born: 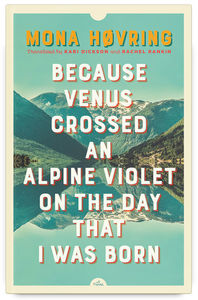 In the morning, as I sat eating breakfast, it all became clear, this thing between me and Martha, something that might never have happened had it not been for my unexpected peace of mind, which was perhaps thanks to having read Zweig. Then and there, I relinquished any responsibility for Martha. It was self-assumed responsibility. I broke the pact, you might say. The undefined obligation. Who benefited from it anyway? Not Martha. Not me. In other words, I let it go. It was a decision that had crept up on me, uninvited and encouraging. From then on, I thought, I would respond differently to my surroundings.

The world was merciful that day, in a way I’d never before experienced. No demands were made. I felt no degrading or wretched shame.

I stood in the doorway to the ballroom, where Saturday’s dance was going to take place, and watched a carpenter who was replacing some of the floorboards. I watched him without discretion. Like an overgrown schoolgirl, I leaned against the door frame with my arms akimbo and followed his every move, as if I were his apprentice—a pleasing thought. And when he turned around and said hello, I was neither embarrassed nor shy. I walked into the room and shook his hand. I told him my name, surname included. Without thinking, I said how nice it was to watch him work. I said the sound of carpentry was like music. I said I envied him, I envied the hammer and the saw, the spirit level and drill. I chatted away about the wood that the carpenter was fitting, about the sharp-edged peace of the planks. And before I pulled myself away, I said I wished we were somehow related.

Fortunately, it seemed that the carpenter, a lean, older man, was not put out by my rambling, as he continued to work with skill and focus.

Goodness. In retrospect, I think the man must have thought I was mad. But at the time, it never occurred to me. In the moment, I felt elated by my newly acquired inner peace, by my decision to be frank, by Zweig, by who knows what. Also, in retrospect, I have planted a seed of doubt as to whether it really was a state of inner peace, or if I, for a short while, had been bestowed a fleet- ing but nonetheless gratifying fervour, a much-needed confidence.

On the way back to my room, I was stopped by Ruth. She put her hand gently on my shoulder, as though she were afraid I might break, or perhaps she was so careful because I was obviously lost in my own thoughts. She apologized for the hammering and hoped the noise wasn’t disturbing. It would be a day or two before it was finished, she said, and our room was directly above the ballroom, so we would, of course, be compensated for the inconvenience.

“Where was Martha yesterday, by the way?” Ruth asked.

The question came completely out of the blue and my response was brief. I said that I was not responsible for my sister.

In the evening, I ate a three-course meal and got drunk. It wasn’t particularly obvious, I’m fairly certain of that, as alcohol actually makes me less talkative, more introverted. I sat peaceful and happy on my own at the table and did not plague anyone with pointless chatter. I didn’t want to give myself away, I wasn’t going to bother others with unwanted attention.

An older man, who had apparently lived in the hotel for twelve years, had his own table over by the door. He gave me a gallant nod, and I nodded in return. For a moment I was tempted to ask if he wanted company, but then couldn’t bring myself to do it, all the same. We raised our glasses to each other a couple of times. I decided to call him Apollo.

The snow was falling thick and fast outside. I liked the honesty with which the snowflakes settled on the landscape. I liked the feeling of being suspended in a dream. My movements slowed. I felt an almost friendly affection for the other guests, the families and couples seated around beautifully lit tables. They smiled and chatted, with an almost naive trust in words; they maintained the illusion that they were understood through the quiet, pleasant hum of voices. I sat there with a sense of spine-tingling, surging alertness. I feared nothing, I had no enemies. My offering was an open, accommodating silence. Ruth came over to my table and poured me a cup of coffee.

“That’ll put hairs on your chest,” she whispered in my ear.

When I took a sip, I burned my tongue, so I cooled it with a teaspoon. It undoubtedly looked rather odd. The large, round lamps hung from the ceiling like moons. It felt like I was alone on some unknown celestial body, a glowing satellite, despite the other guests, and even though Ruth was so attentively present.

That night, I dreamt that the snow had gone. The birds twittered as though possessed, and the beds in front of the hotel were full of crocuses and lilies of the valley. Spring overwhelmed me, it was too beautiful—in truth, alarming. I got it into my head that the ground would give way, that soon everything would be swallowed up. Would we continue after death? Would we still be ourselves? A white cat stalked across the small patch of gravel up by the chapel. I was filled with despair in my dream. I had no resistance, no way to protect myself. It was as though everything around me was about to fall apart, my pores lost their breath, my muscles felt stiff, my mind was foggy. Strong currents pushed against me. Nothing in me felt solid. In the coffee grinds at the bottom of a cup,I saw a bear, a fish, a herd of goats in the shade of an enormous pine tree.

Excerpt from Because Venus Crossed an Alpine Violet on the Day that I Was Born by Møna Hovring (translated by Kari Dickson and Rachel Rankin), a novel published by Book*Hug Press. Copyright 2021, Møna Hovring. Reprinted with permission.

Mona Høvring is the author of six poetry collections and four novels. Her previous novels include the acclaimed Something That Helps (2004), The Waiting Room in the Atlantic (2012), winner of the Unified Language Prize, and Camilla’s Long Nights (2013), nominated for the Nordic Council Literature Prize. Because Venus Crossed an Alpine Violet on the Day that I Was Born won the Norwegian Critics’ Prize for Literature, was a finalist for the Norwegian Booksellers’ Prize, and was included on numerous critics’ Best of 2018 book lists.

Kari Dickson is a literary translator. She translates from Norwegian, and her work includes literary fiction, literary fiction, children’s books, theatre, and nonfiction. In 2019, Book*hug Press published her translation of Rune Christiansen’s Fanny and the Mystery in Grieving Forest. She is also an occasional tutor in Norwegian language, literature and translation at the University of Edinburgh, and has worked with the British Centre for Literary Translation (BCLT) and the National Centre for Writing. She lives in Edinburgh, Scotland.

Rachel Rankin is a poet and translator based in Edinburgh, Scotland. She received a Scottish Book Trust New Writers Award in 2019 and was selected for the National Centre for Writing’s Emerging Translator Mentorship Programme in 2018. She has also worked as a tutor in Scandinavian Studies at the University of Edinburgh, where she has taught classes in Norwegian language and Scandinavian literature.

In a hotel, high up in a mountain village, two sisters aim to reconnect after distant years that contrast their close, almost twin-like upbringing. Martha has just been discharged from a sanatorium after a mental breakdown. Ella agrees to keep her company in the hope that the clean winter air will provide clarity—and a way back to their childhood connection.

It’s only when plans go awry, and Martha disappears in a rage, that Ella discovers a new sense of self outside her filial role. This identity is reinforced by various encounters: the hotel receptionist who takes her under her wing; the enigmatic love interest; the wistful, drunken Salvation Army soldier; the carpenter. And not least, Ella’s encounter with the writings of Stefan Zweig, which have a profound impact.

Mona Høvring’s award-winning novel Because Venus Crossed an Alpine on the Day that I Was Born is as sharp as it sensitive; insightful as it is original when exploring the many distractions of the heart.