Giller-nominated novelist Pauline Holdstock returns this fall with her eighth novel, Here I Am! (Biblioasis), the spellbinding story of six-year-old Frankie, who runs away to France to find his father after his mother's death.

In Frankie, Holdstock has created an unforgettable young narrator - funny, determined, and by turns wise and innocent. Drawing comparisons to The Curious Incident of the Dog in the Nighttime author Mark Haddon, Holdstock's storytelling is deeply charming, anchored in the truth and depth of Frankie's experiences, loss, and raw hope.

We're thrilled to present an exclusive excerpt from Here I Am! on Open Book today, courtesy of Biblioasis. In this section, we get to hear a little bit about Frankie's daring plan to get to France by boat, all told in the authentic, witty, child-voice of Holdstock's creation.

Excerpt from Here I Am! by Pauline Holdstock 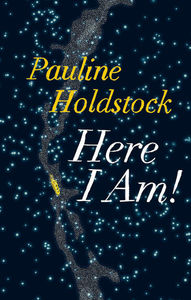 I will tell you first how I got on board without a ticket. If I don’t you will think I am making it up.

It was easy. First I walked through the big gates with a big crowd of people — but that’s no good. You will just wonder how I got to the gates and how did I know where the boat was. I will answer the first question but not the second one because everybody knows where the boats are. Well. I ran away from my school when I couldn’t stand it anymore and I ran all the way down Princes Street. You can’t get lost because there are great big fat arrows and they have DOCKS written right on them in capital letters. And anyway I knew the way because I have a good memory. MyDad took me there right after when MyMum came home from the hospital so he could show me where we were all going to go when she was herself again and he could take us on holiday to France.

I had to keep running all the way so if I saw anyone they wouldn’t say Oh hallo! Are you lost? When I came near the big sheds where passengers wait for their boats I slowed down because I was exhausted. I was on my last legs! (That’s what you say. As if you have extra sets.) There were a lot of people in the doorway all talking to each other and undoing their cases and doing them up again and looking in their pockets and hugging and being all sloppy. I said Excuse me excuse me excuse me and everyone I said it to sort of moved out of the way just a tiny bit so I could get by and they were so busy doing what they were doing that they did not even look at me.

Inside it was even bigger than I thought and I could only see legs. It was a good job I looked up high because over on the other side there were two giant notices hanging in the air. One said  PASSENGERS with the arrow pointing left and one said  VISITORS with the arrow pointing right. (Actually, if you were the arrow it was pointing to its left but don’t worry about that. It might confuse you.) I followed the sign that said PASSENGERS because I was going somewhere. And because there was not a sign for PEOPLE WITH NO TICKETS. (That is only a little joke to cheer you up in case you were confused. By the arrows.)

The crowd of people trying to get out of the door for PASSENGERS was even bigger than the crowd of people who had been trying to get inside the shed. I was amazed at how many people were going to France all at exactly the same time as me! I got in really close behind a Mum and a Dad and their kids and sort of squeezed through the door at the same time as them. On the other side you could see the boat only it was a ship. It was gigantic and it was covered all over with strings of coloured triangle flags. They are called buntings. I know that because MyMum told me when we went to the fête up the road for some jam. She said to MyDad I don’t care if it’s church. I’ve run out. They had triangle flags everywhere and that is when she told me what they are called. I asked her if it was the same as Cry Baby Bunting and she said Oh don’t remind me. Then she played Lucky Straws until she won a bottle of sherry and then we went home. Well we started to go home but we had to go back because she had forgotten to buy the jam. And then we went home.

Anyway. I could see the ship and I could see tiny people up at the top of the gangplank trying to get inside. The top of the gangplank was higher than a house. (That’s just a nestimate. You can’t tell exactly because it depends how big the house is). I could see it even with all the people in front of me. Everyone had to walk all squished together in between big wire fences like the cows in front of us when MyDad had to stop the car only they were hedges then not wire fences. And there wasn’t any music then either. Did I tell you I could hear music? It wasn’t in my head like it is sometimes. You will see in a minute why not. There was not a lot of room between the fences. Someone said Where’s your Mum? And I started to run. I said Excuse me excuse me excuse me because it worked before and sometimes I said Mum! Mum! as well. I pretended I could see her up ahead and she was calling me to hurry up.

And now I will have to stop telling you this because I have thought of something bad. It is very difficult to think about and I can’t do rocking and writing at the same time. You know what they call rocking. Unhelpful behaviour. I’ll just stop for a minute and do counting.

This excerpt is taken from Here I Am!, copyright © 2019 written by Pauline Holdstock. Reproduced with permission from Biblioasis, Windsor. Biblioasis.com.

Pauline Holdstock is an internationally published novelist, short fiction writer and essayist. Her novels have been shortlisted for a number of awards, among them the Best First Novel Award, the Scotia Bank Giller prize and the Commonwealth Writers’ Prize. Her historical novel Beyond Measure was the winner of the BC Book Prizes Ethel Wilson Award for Fiction. The Hunter and the Wild Girl, her most recent book, won the City of Victoria Butler Book Prize. Pauline lives just outside Victoria on Vancouver Island.

Sometimes I forget that MyMum is dead. But that is probably better than remembering.

When Frankie’s mother dies, the six-year-old comes up with a plan: go to France, find a police station, and ask the officers to ring his father—and so begins Giller-nominated Pauline Holdstock’s eighth novel. Narrated in turns by Frankie, who likes cheese, numbers, the sea when it’s pink and “smooth like counting,” and being alone when he feels bad, and a cast of characters that includes his Gran and his father, Here I Am! is a mesmerizing story about innocence lost and found.