Vancouver-based author and illustrator Scot Ritchie has published a staggering 60-plus books for young readers, many of which are beloved titles in households across Canada, including favourites like Let's Go! The Story of Getting from There to Here.

He returns this summer with the charming and memorable Owen at the Park (Groundwood Books), where young Owen works with his father in the titular park and gets to take on an exciting new responsibility. Inspired by Berlin's historic Tiergarten Park, Owen at the Park is sweetly thoughtful, gorgeously illustrated, and will be enthusiastically welcomed into the story rotation of any young reader or listener.

We're excited to welcome Scot to Open Book today to talk to us more about his incredible path as a writer and artist, his newest book, and how he works as part of our Kids Club interview celebrating writing and illustration for young readers.

He tells us about the bike ride through Tiergarten Park that sparked his moment of inspiration, the relatable message he hopes to share through the book, and his favourite part of the entire life cycle of creating a book. 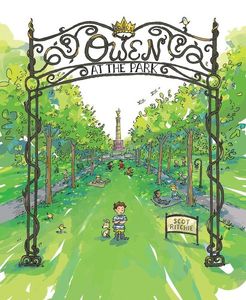 Owen at the Park was inspired by a visit to a place called Tiergarten in Berlin. Berlin is a favourite city of mine and I had ridden my bike through the park before. But on this hot summer day, something different happened. It was comical but somehow majestic. Like other books I've written, something in that moment inspired me. I jumped off my bike and took pictures and made notes in my sketchbook - not knowing what shape a story might take but feeling very sure there was one there.

It did change as I wrote. I knew I wanted the message to be about how seemingly insignificant things can actually be big things – depending on who is feeling them and why. As the book developed I realized I could focus that all on Owen, a shy boy who achieves something he didn't know he could do.

It's interesting doing a book about a real place because you are somewhat locked in in terms of location but it's fiction at the same time so, as the author, you decide the balance. I'm not sure why I find this exciting but I love the idea that a child (or anybody) might read the book, then go to the park and see the real statues, just like I drew them.

When I was working with Sheila (my publisher) we had considered making it a generic park, worried about being too specific. Ultimately we decided to be specific and locate it in the real park. Like a lot of art, being specific often makes it more universal.

Being able to go back to Berlin when I was working on the art was a real gift. Getting a book done can take a long time so I had returned home to Vancouver by the time I learned I had a contract with Groundwood for this book. As it turned out I returned to Berlin the next year. It was pretty special to go to visit the park to check details and just be inspired as I worked on the illustrations.

Another enjoyable memory was when I was back in Vancouver writing the book. I reached out to the Parks Board at Tiergarten to ask specific questions. Although the book is fiction I wanted a certain amount of reality to ground it. A German friend was kind enough to translate my email and, much to my surprise, a groundskeeper wrote back with. It's my goal to get a book in his hands.

I travel a lot, usually staying two or three months in one place, so I'm often living in new places. That means new desk, new window to look out of (or not), new art store, and new noises around me. I learned very quickly you can't be too precious about what rituals or art supplies you need to create. It's easy to fall into a trap thinking you need a special pen or paper but that is an excuse.

For my illustration I bring my tools with me so it's really the writing that necessitates adapting to new surroundings. I've actually found it's stimulating and I've been fortunate to have three books published based on my travels. If anything I've almost come to rely on travel to stimulate my imagination. An expensive trick but it does seem to work!

When I'm writing I'm drawing at the same time. Because I was an illustrator long before I started writing, I need to see the spreads as I write. I know my art will tell the story along with the words - and I don't want to repeat myself. I have a clipboard with paper for quick sketches. It's recycled paper so I don't worry if the sketches are good, I just want to get down what I have in my mind.

When I'm illustrating somebody else's book it's a different process because I can't shift the parameters – the story is already done. But often having defined boundaries can be a gift because you have to create within them – rather than being able to do anything you want.

I usually have music on but can only listen to Baroque when writing. I read that it helps you think so I'll use whatever I can!

I do have a favourite type of pen that I've been using for years, just the right balance of thin line but still with a bit of weight – it's a Pilot, Fineliner.

I do have various techniques to rejig if I've become stuck but beneath it all it's quite simple – this is my livelihood and I have to pay the bills. So that's quite motivating.

In terms of strategies there are a couple of tricks. First, have a few irons in the fire. Right now I have three stories at different publishers, waiting to hear back. At the same time I'm working on new stories. When one stops dead in its tracks I put it away – long enough to almost forget what I was writing. Then when I look again I see it with fresh eyes. Usually that allows me to get to work again but sometimes I have to admit it's an idea that doesn't work. But I don't give up easily – I have stories that I started 15 years ago, lurking in folders waiting for their big break.

Another necessary way of coping is to realize (and remember) how much I love doing this. I've been at this for a long time and still love being able to create artwork when I illustrate somebody's book or tell a new story of my own. It's a tough business and if you love it, that's what keeps you going.

I love this question because it makes me realize I have a few favourite parts. The inspiration and first draft are exciting because you feel you're onto something but you're not quite seeing the shape yet. Then, depending on the editor (and I have only good things to say about editors I've worked with), the revision process can be exciting. If an editor has taken it onboard they are usually excited about the story as well so it is a great pleasure to work with somebody. Writing and illustrating is mostly solitary work and it means so much to have someone to share your idea with.

Creating illustrations have two distinct steps – first roughing everything out, pencil sketches and thumbnails. This is similar to writing the first draft, you're getting the thoughts in your head on paper – to see if they still work. Then doing final artwork (in my case inking on paper, scanning that in then working on the computer) is enjoyable but for different reasons. At this stage I'm able to relax and play a bit. You're really just seeing what colours go where and why. It feels like the reward part of the book.

The toughest part is when the story isn't moving the way you want it to. That can be when you're writing it originally or working with an editor. You really run the gamut of emotions – is the whole story a waste of time or do I just need to tweak a few things?

Promotion is tough for me. I'm basically an introvert in a business that asks us to be extroverts at times. When I started it wasn't something the creators even did, or certainly to a very limited degree. I guess I rely on my books speaking for themselves. And maybe that works. I've done over 60 books to date and between them have translations in everything from Chinese to Polish, Arabic and Russian.

Well, I guess that was a bit of promotion, maybe I'm not so bad at it after all.

I'm very happy to report that I have a new contract for a book with Groundwood. I've written the story and am waiting for editorial comments. It's about life in B.C. and the people who live and work in the woods and on the ocean. I'm very excited to get going on it.

I have another new book that I wrote and illustrated on mindfulness. It's for Kids Can Press and is part of my 'Exploring Our Community' series. I'm in the final stages now, colouring in the art. That will be out in the new year.

As mentioned above, there's always new stories I'm working on. Finally, I'm doing illustrations for a variety of clients, right now something for the SPCA magazine and soon the cover of Write Magazine.

Scot Ritchie is an award-winning illustrator and author with more than 50 books to his credit. His books have been translated into French, Korean, Indonesian, Polish, Finnish, Arabic and Dutch. Scot has worked with the National Film Board of Canada and has had his illustrations exhibited at the National Gallery of Canada. He lives in Vancouver.

Owen at the Park

It’s a busy morning in the park. All along the boulevard, families are picnicking and people are napping, playing checkers and reading on the grass. But Owen and his dad are hard at work, raking and mowing the grass. And today, Owen gets to do the best job all on his own. With his dad’s encouragement, Owen gathers his courage and goes around to everyone in the park. He tells the families, the checkers players and the readers what he has to do, and they rush off. Finally, when the park is empty, it is the moment Owen has been waiting for. He turns the tap for the sprinkler system, and water cascades over the trees and flower beds.

In creating this book, Scot Ritchie was inspired by his trip to the beautiful Tiergarten park in Berlin. Owen at the Park is a sweet story illuminating the small pleasures in everyday life and the excitement of a child taking on new responsibilities.